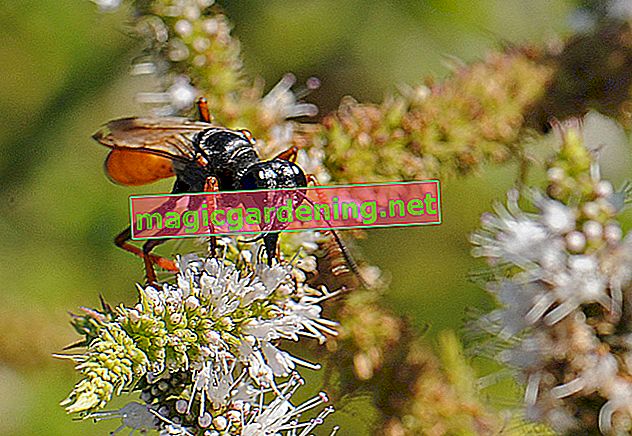 Different types of hymenoptera are known as wasps, including 156,000 species worldwide. They belong to different orders and families who follow variable lifestyles. Waist wasps include not only German wasps, honey bees and wood ant, but also numerous inconspicuous species. Small black insects are also found in the plant wasps. Scientists do not make it easy for the layperson to identify a species of wasp discovered in the garden. Pictures and notes from the location are important to be able to assign the species to a specific family. Each family is characterized by specific characteristics and different ways of life. The color is not a clear feature, which is why black wasps can be found in different families of the waist wasps as well as in the plant wasps.

Make notes of where the wasp was found. The habitat provides informative information about the species, as many have specialized in certain biotopes. Pictures are necessary because the insects can only be identified based on their specific body characteristics. Often a photo is not enough, because fine details of the wasps are mostly hidden. So take as many pictures as possible and cover different perspectives.

Most black-colored wasps are small to medium-sized and less than two centimeters tall. These wasps belong to the waist or plant wasps. Larger species usually belong to other kin groups. They can be observed in species-rich habitats and are often found in the vicinity of humans.

In Germany there are a large number of wasp species that hardly grow larger than a centimeter. Most species prefer open and sandy habitats because they build their nests in the substrate. Diverse vegetation offers the insects valuable retreats and protection during the winter. Dry and sandy garden areas such as wall crevices or joints between paving stones are also populated. Other species have specialized in more humid habitats such as meadows and forests, or colonize dead wood. Within this subfamily there are numerous black colored species that are difficult to distinguish from one another. They colonize similar habitats and are small to medium in size. This subfamily is one of the most developed digger wasps. Some species show behavior that is similar to that of bees. The preferred habitats hardly differ between the common species that occur in human settlement areas:

This genus includes around 200 species, 37 of which are found in Central Europe. These insects prefer a cooler climate and are less common in the south. They are small to medium in size and often black in color. The fine point-like structure is typical, whereby the body also has smooth and shiny areas. An exact identification of the species is difficult because many species are very similar. The females build their nests in the ground or partially in wood and hollow plant stems.

This family represents the most species-rich group of hymenoptera found in Central Europe. Ichneumonid wasp larvae live parasitically and feed on butterflies, beetles, plant wasps, spiders and other insects and their larvae. Their preferred habitats are humid. They live in wet meadows or in bushy park areas.

The black parasitic wasp (Pimpla rufipes) can often be seen on the edges of forests and clearings or in hedges. It has a slim body that is ten to 15 millimeters long. Her body is colored black, with the light orange legs clearly standing out.

The species of this family can be easily distinguished from similar hymenoptera in sunny and warm weather, because they have a special way of life. Females actively crawl on vegetation or the ground in search of prey. They prefer prey with a similar way of life and predominantly hunt spiders. In Central Europe there are 100 species, of which these black-colored wasps are more common: Most species of these plant wasps are black in color, although there are also some with yellow markings. The graceful and elongated body is typical. Your abdomen is cylindrical in shape. They are between four and 18 millimeters long and have a movable head that is clearly separated from the trunk. 19 species have been described in Germany, one of which is extinct and another is thought to be lost.

A supposedly large black wasp in Germany gives some observers a queasy feeling. The large wooden bee (Xylocopa violacea) reaches a size between 20 and 28 millimeters and is one of the largest bees in Central Europe. Occasionally the deep black colored species with the bumblebee-like appearance is mistaken for a black hornet. The dark-tinted wings, which have a blue sheen, are striking. It occurs more frequently in habitats with less heat.

The males of this largely unknown species can grow up to six centimeters, while the females remain somewhat smaller. They belong to the digger wasps and are pitch black in color. The mouthparts are longer than the forelegs and frightening. Their shape is sickle-like. Females have a sting that they can use to paralyze their prey. The Californian scientist Lynn Kimsey discovered living specimens of this species on the Indonesian island of Sulawesi. It has not yet been observed in the wild.

This digger wasp with the scientific name Isodontia mexicana reaches a size of up to two centimeters, with males being slightly smaller than females. They appear solid black and have blackish wings that shimmer bluish in the sun. Adult insects are flower visitors and can often be seen on goldenrods or man litter.

Since the range of species of black wasps is so broad, the behavior patterns differ between the species. Hence, there are both beneficial and harmful types. Black wasps usually do not pose a threat to humans.

Plant wasps are not dangerous. However, many species can harm your plants. Black wasp pests on cereals belong to the group of straw wasps. But there are also strikingly colored pests such as the rapeseed sawfly.

Whether a black wasp can cause a sting depends on the species. Basically, voices, which include wasps and digger wasps, can be dangerous to humans. These species have a defensive sting that they use to protect themselves against potential predators. If they feel threatened by humans, it can lead to a sting. This is more or less painful and heals by itself in most people. Sensitive people and allergy sufferers can experience symptoms similar to those of a wasp or bee sting.

Is a black wasp poisonous?

In the insect kingdom, the species draw attention to their toxicity by developing warning colors. A typical example of this so-called aposematism is the German Wasp with its characteristic black and yellow signal drawing. It makes potential predators aware of their ability to defend themselves.

Researchers from Granada have found that the amount of poison is related to the luminosity of the warning colors. The more intense the yellow-black color of the collected wasps, the more poison these insects had in their sting. Black wasps in Germany, on the other hand, are non-toxic. The Legims, to which parasitic wasps belong, have a laying stinger. Females use it to inoculate their eggs in a suitable substrate. Just like the plant wasps, you cannot sting with this stinger. There are also species with an ovipositor among these hymenoptera. Females of the black cone wasps can look frightening with their ovipositor, because it protrudes significantly above the tip of the abdomen.

Numerous black wasps turn out to be useful creatures in nature. Digger wasps feed on flower nectar and pollen. Their offspring are fed spiders and other insects. Some species lay their eggs in the plant galls caused by straw flies. Wasps hunt spiders that have a similar way of life. Funnel web spiders and wheel spiders are on their menu. You don't stop at crab or sack spiders and can kill the widespread house spider.

In order to promote the useful species in your garden, you should make it varied. The wasps come automatically when they find suitable food.

Are there wasps that have blue wings?

One species is often confused with wasps, hornets, or bumblebees. The large wooden bee belongs to the family of real bees, which together with numerous black wasps form the suborder of the waist wasps. It is also called the blue-black or violet-winged wooden bee because of its striking wing color. Wooden bees need rotten wood to nest and have a high heat requirement. Since suitable habitats are disappearing, the species is on the warning list of endangered species in Germany.

Sceliphron species are predominantly native to tropical Africa and are known for their extraordinary nests. The females collect moist soil and clay to build nests. They use the material to make a fist-sized nest made up of several cells. These hang on plants, rocks or walls and are reminiscent of brown paper bags. It is not uncommon for the nests to be carried off to other parts of the world by humans if they are on the goods. This enabled some species to spread into the Mediterranean area.

Insects that make up states are highly developed. There are some families of the waist wasps with this way of life. This includes ants, real wasps and bees. State-forming wasps can be recognized by their conspicuous coloring. All black wasps live solitary as lone fighters. They pursue predatory or parasitic ways of life and feed on mosquitoes, aphids, spiders and flies. Other species specialize in a plant-based diet.

Are there tiny black wasps that look like flies?

Gall wasps are usually one to three millimeters and rarely eight millimeters in size. With this body size, the predominantly black waist wasps can easily be mistaken for small flies. These legumes place their eggs in vegetable tissue. The larvae trigger the typical growths in the leaf tissue, which are visible as plant gall. With this way of life, the insects represent an exception within the Legims. Gall wasps often live on oak, maple or rose plants.