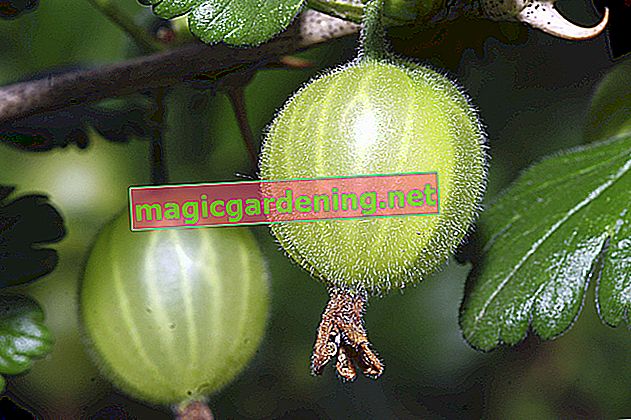 Large, juicy fruits and a pain-free harvest are the reward for a targeted planting and training pruning. In order for your gooseberries to flourish flooded with light and clearly arranged, cut the berry bush as follows for the first two years:

With 4 to 6 promising scaffold shoots, a gooseberry bush is well positioned. You cut off excess ground shoots without long stubs . Even if it is difficult, you should shorten the young shoots in the first and second year. This strengthens the stability so that they can carry the valuable fruit wood with lots of juicy gooseberries. In the following years you can expand the basic structure to 8 to 12 ground shoots , provided that the available space in the bed allows. Maintaining profitability on the gooseberry bush

In the third year of standing, the pruning of gooseberries flows from the upbringing to the conservation. If you take note of the following principle, nothing can go wrong: Old, dark brown wood has to give way - young, light brown wood is encouraged. Shoots from the age of four are assigned to the old wood. How to complete the correct maintenance cut:

As shown in the figure below, pruning combines maintenance and continuous rejuvenation. Throw out two or three main dark brown branches every year. In return, you promote young, light brown wood that grows directly from the root disc. In order to strengthen the vigor of young main branches, cut off a third of the previous year's growth over one eye next year. The best gooseberries live up to their name. It would be a shame not to enjoy the refreshing berries because of the sharp spikes. With the right equipment, you can master incision care without painful wounds. Thorn-proof gloves with long cuffs are a must. Safety glasses, high rubber boots and thorn-proof boot pants round off the equipment. So that you can dedicate yourself to cutting heavily reinforced rods at a safe distance, we recommend loppers with telescopic arms .

The tapering cut aims to replace the old framework with young ground shoots for a new build. Cut off all old, dark brown shoots at ground level. With a little luck, you will come across fresh wood that sprouts directly from the rootstock. Select the four to six most vital specimens.

An old scaffold shoot signals courage to live when it has young, light brown side shoots to offer. In this case, place the pruning shears at the fork between dark and light wood. If there are several side shoots to choose from, give priority to an outward-facing, unbranched shoot. Complete the rejuvenation cut in winter

An old, thorn-covered gooseberry bush serves as a valuable refuge for wild animals. In summer there is a lot of activity because birds raise their offspring in a dense network of rods. To protect our endangered flock of birds, the Federal Nature Conservation Act prohibits radical wood cuttings from March 1st to September 30th. Rejuvenation of the gooseberry bush is exceptionally permitted between October 1st and February 28th , provided that the wood does not accommodate any animal winter guests.

The pruning on the gooseberry stem follows similar basic rules as they apply to bushes. For a decorative and productive crown shape, the number of leading branches should be limited to four to six shoots that are no more than four years old. The following premises apply to a competent shape cut:

Often cheeky wild shoots sprout from the trunk or the wild stock. You should remove these immediately, regardless of the current season.

As high stems, gooseberries are reliant on a support rod for a lifetime. The wooden post should reach up to the middle of the crown to guarantee sufficient stability.

A good-natured cut tolerance recommends gooseberries for cultivation as column fruit. Characteristic of the space-saving growth is a dominant central drive that you continuously tie onto the support pole. How to properly cut a columnar gooseberry:

In the course of the new season, young shoots sprout from the buds of the short cones, which bear fruit the following year. The long-awaited flowers appear on the light brown shoots of the previous year this spring, followed by refreshing gooseberries in summer.

Are gooseberries self-fertile or should I plant two varieties?

Male and female flowers thrive on gooseberries at the same time. The transmission of pollen is done by the wind or hard-working insects. A single plant is therefore sufficient for a harvest of juicy gooseberries. Nevertheless, it is advisable to socialize two different varieties in order to increase the harvest yield.

Should gooseberries be cut after planting?

A plant pruning is definitely advantageous for strong branching and the growth of numerous fruit canes. Select 4 to 6 promising shoots as the framework for the start. You can shorten strong rods by a third. Cut weak shoots by up to two thirds. Cut off all remaining ground shoots at the base. In view of the frost sensitivity of a young gooseberry, please do the planting only in the spring after planting.

Is it possible to keep a bucket? How big should the pot be?

Basically, bucket-keeping for gooseberries is not a problem. The pot size depends on the habit. As a shrub, a volume of 7.5 to 10 liters is advisable at the beginning. Tall trunks and columnar fruit require a bucket with at least 15 to 20 liters to additionally guarantee stability. Please note that the water and nutrient supplies in the tub are used up faster than in the bed.

Poor berries, a dense network of canes and unstable ground shoots are the result of typical cutting errors. The following table draws attention to the three most common mistakes in the pruning of gooseberries and provides useful information for professional prevention:

If annual shoots on gooseberries are too close to the main shoot, they should be thinned out to a distance of 10 centimeters. The clippings are perfect for propagating cuttings. Choose rods that are 20 to 30 centimeters long and put in a pot of lean potting soil. Three to four eyes should be above the substrate. Poured regularly in the partially shaded location, the rooting does not take long.