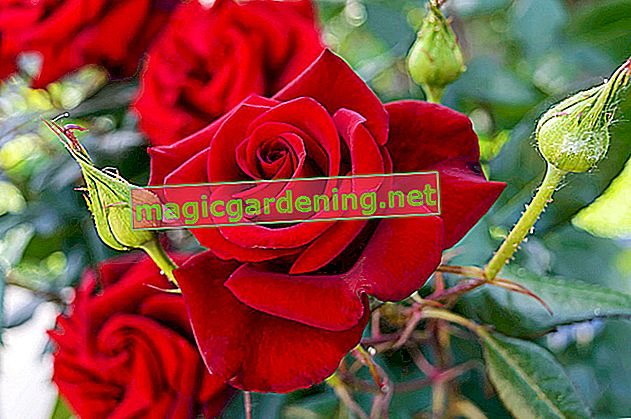 Roses that bloom once cut after blooming

In contrast to the modern roses that bloom on annual wood, roses that bloom once only develop their blossoms on the previous and perennial shoots. For this reason, these rose varieties should only be cut back in summer, directly after flowering. Then new shoots grow back immediately, which mature by winter and again bear flowers the next year. For rambler and cascade roses, shorten long shoots and take older branches back to the base. In the case of shrub roses, cut the tall, faded shoots back to their normal height, while the side shoots are shortened a little more. Then the rose shows a nice rounded shape again.

Cutting back what has faded: This is how it's done

In the case of roses that bloom more often, the faded shoots are cut back to the next fully developed leaf. This measure not only ensures that the rose sprouts again and is thus stimulated to bloom again and again, but also prevents various fungal infections. Roses that form rose hips are of course not cut - otherwise you would deprive yourself of the splendid autumn splendor. It is important with this cut that the withered shoot is removed until the next complete five-, seven- or nine-part leaf. If you look closely you can see that the leaf sitting directly under the flower is only one to three parts and is therefore not fully developed. After this rose cut, you can usually look forward to new flowers after about six weeks.

Permanently blooming roses, which are constantly pushing in flowers, show you where to start the scissors. As soon as they have wilted, these varieties sprout again. The faded branch can be cut out directly above the new shoot. If you sometimes cut deeper - which may occasionally be necessary to correct the shape - you will have to wait a little longer for the next bloom.

In June, almost all roses have abundant blossoms, which however often diminish drastically afterwards - even with the more frequently blooming varieties. These need a break in order to recharge their batteries for the development of new flowers. With a trick you can still get the roses to bloom during this time. With the so-called pinching, you remove up to a third of the shoots together with the buds before the first flowering. Underneath there are sleeping eyes that sprout again immediately and finally bloom exactly when the first bloom is over.

Wild roses are not cut, only thinned. Their graceful overhanging growth also adorns after flowering, and most species and varieties develop rose hips. An exception, however, are the rugosa roses, also known as potato roses, which are better off with a thicker cut - they easily age without a cut.