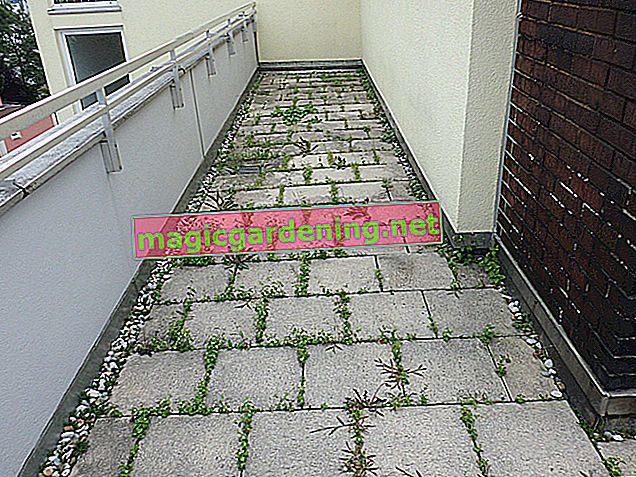 How does salt work as a weed killer?

Even in low concentrations, salt acts as a poison in plants. This is why increasing soil salinization is a major problem in agriculture.

The plants are initially exposed to salt stress:

Above ground, the salt water leaves burns on the parts of the plant. The liquid that seeps into the soil is absorbed by the plants. The roots are completely destroyed by the solution, so that the weeds can no longer absorb water and dry up.

Even abundant watering can usually no longer remove damage caused by salt. Although the salt ions penetrate deeper soil layers, they do not disappear as a result. The only way to save the damaged plant is to move it.

Can I also use the inexpensive cattle salt as a weed killer?

Cattle salt, for example in the form of a salt lick, serves the animals as a valuable nutritional supplement. Since it is less cleaned than table salt, it is cheaper. In order to distinguish it from table salt, it is often colored pink. The main component of this type of salt is sodium chloride, as well as various other minerals.

Since you are not consuming the salt, you can use it to kill weeds.

Which mixing ratio is recommended?

Under no circumstances should the salt water solution be too strong, otherwise there is a risk of massive damage to the surrounding plants. If you want to use table salt to kill weeds, you should proceed as follows:

When is the use of salt prohibited?

The use of table salt or cattle salt on sealed surfaces is prohibited. These include, for example, the courtyard entrance or terrace areas. In this case, the salt water is used like a pesticide and must therefore be classified as such. Paragraph 6 of the Plant Protection Act states that plant protection products are prohibited on all open spaces that are not used for horticultural purposes.

This applies to all paths and paved areas around your house. However, if you use salt water here to fight weeds, you risk severe fines.

The reason: Salt, regardless of whether it is cattle or table salt, cannot be biodegraded. It gets directly into the groundwater and causes significant problems during clarification. In the sewer system it can damage the pipes.

Where can salt be used to kill weeds?

You can use table salt as a weed killer on all unsealed surfaces in private areas. Remember, however, that this agent is by no means milder than chemical substances. Ornamental and useful plants that thrive nearby can be damaged by salt.

Why is salt only partially recommended as a weed killer?

Salt not only dries out organisms, it also dries out the soil and massively damages the microorganisms living in the earth. The biodiversity, which is important for humus formation, is reduced. The pore volume, the oxygen content as well as the rooting capacity of the earth and thus the root growth of all plants also suffer. Air exchange and water conductivity of the substrate are inhibited. The ornamental and useful plants can no longer absorb enough nutrients.

What alternatives are there?

Hot water, which you can legally use to kill weeds, is harmless to the environment and just as effective as table salt. This also destroys the roots of the weeds so that they perish quickly and can be removed.

A tried and tested method for larger, paved areas is flaming with special equipment. The thermal weed killers destroy plants and roots sustainably and keep paved areas weed-free for a long time.

Another effective method is the weed scraper, which you can use to lift weeds out of the cracks between the paving stones. If you then sweep sand or gravel into the crevices, this material acts like a mulch cover. Weed seeds are almost always light germs. Covered, the seeds will not come up and your paved areas will remain free of disturbing green for a long time.

Weeds in beds should be plucked mechanically and in this way removed gently for plants and animals. A layer of mulch ensures that they no longer come up as quickly. At the same time, this blanket serves as valuable food for the organisms in the ground.

If you want to fight weeds with table salt, you should consider that this is no more gentle than chemicals. If you want to destroy weeds with little effort, you should therefore better use tested products from specialist gardeners. When used in the correct mixing ratio, these are relatively environmentally friendly.