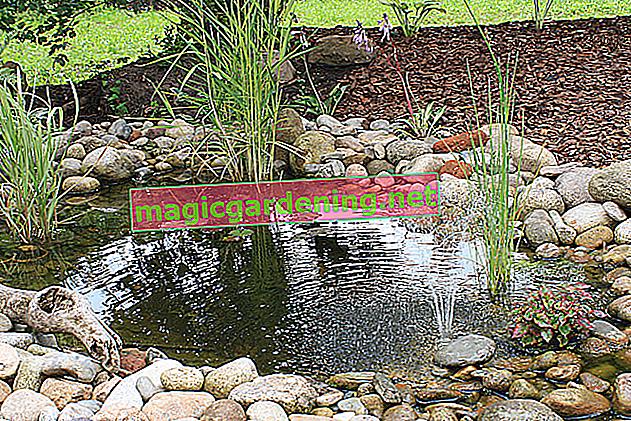 Pond liners can be made of different materials. The most common are:

There are also some special foils made from special geotextiles, which are rarely used and are practically not used at all in private horticulture.

PVC films have the most disadvantages of the film types:

Despite the disadvantages, the PVC film is clearly the most frequently used film on the market and also in professional landscaping. Nowadays, “sandwich foils” made of different materials are often used in order to improve the properties at least a little bit - but it doesn't quite work.

What speaks as an advantage for the PVC film is only the (significantly) cheaper price. PE foils have a slightly better balance than PVC foils, at least in terms of environmental technology. The other properties are only slightly better.

EPDM is a synthetic rubber material (ethylene-propylene-diene-M group). It has some interesting properties, including high weather resistance. In addition, some other properties are also interesting for pond construction:

Due to their properties, EPDM foils can be made into very large formats, even roll goods up to 15 m wide and 61 m long can be bought ready-made, which makes seamless lining even very large ponds possible.

The question of EPDM or PVC actually already answers itself due to the properties. PVC films only have an advantage if price plays a decisive role.

The right thickness of the film is crucial in the selection. Depending on the depth, the following thicknesses are approximately suitable (see table below)

In the case of problematic soil conditions, a pond fleece with a 5 cm high layer of sand underneath should definitely be used to protect the liner . In such a case, a film with a thickness of at least 1 mm, preferably 1.5 mm, should always be used.

EPDM foils are also used for flat roof sealing because of their good properties.