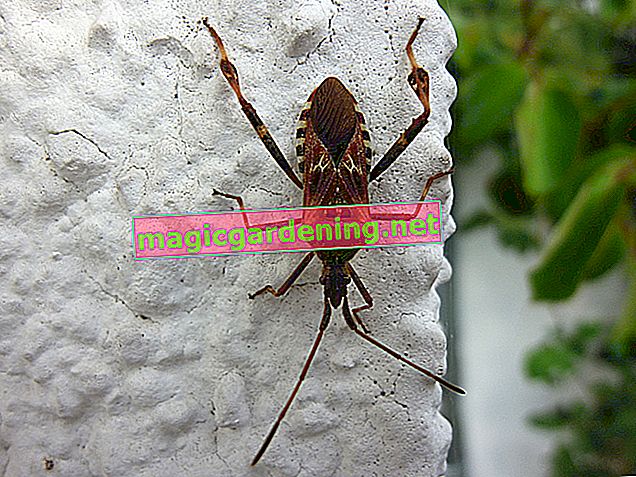 Appearance of beetles in the house

If you want to know what pest it is, you should capture the beetle and take a close look at its surroundings. The location provides information for identification as well as the body characteristics of the animal. After you have made a rough classification, you should consult pictures and compare your insect with the suspected species. If you want to identify bugs in the house, take a look at their body coloration. The insects often have typical patterns and drawings. Many beetles are monochrome, so internet research quickly leads to nothing. To make it easier for you to identify, you can use this table of common bugs as a guide:

Note that the coloring of the insects can vary somewhat depending on the individual. In some species, males differ from females. Often, other insects that appear in the house and apartment are mistakenly mistaken for bugs. These include fire bugs and stink bugs or the red velvet mite.

Classification according to size

Another important determinant is the size of the beetle. In the insect kingdom there are tiny species of a few millimeters as well as those that can grow to be several centimeters. If you catch a beetle with a jar, you can put it on a ruler and measure the animal.

Classification according to conspicuous features

Most of the beetles you can find around the house have well-developed wings. You can watch adult beetles in flight as they seek their way out. In order to identify beetles, in addition to their color and size, you should be guided by other striking features. Typical beetles with long antennae are species of longhorn beetles such as house longhorns. Other species of beetles can also be recognized by clearly visible antennae. The common rodent beetle, whose larvae are also called woodworms, develop easily visible antennae.

Fight the most common bugs in the house Material pests have developed well-developed digestive systems so that they can utilize different substances. In contrast, storage pests are less specialized and focus on energy-rich food. Since most species are photophobic and many are nocturnal, an infestation is usually discovered late. All pests can appear all year round in heated rooms, as they are not endangered by cold temperatures in winter. Weevils represent a species-rich family, 950 of which are found in Germany. Almost all beetles and their larvae feed on plants, but there are a few specialized exceptions. Subfamilies with short trunks live on different types of plants or feed on fresh or dead wood. There are larvae that feed on plant roots or mine in leaves. Still other species are responsible for the typical growths on leaves, which are known as plant gall.

A common species of this family that appears as a vermin is the grain beetle. The three to five millimeters long and elongated beetle is unable to fly. It feeds on all kinds of grain and can be recognized by a large pronotum with punctiform depressions. Dotted longitudinal rows can be seen on the upper wings, which alternate with solid strips. They not only affect cereal products, but also maize and dried fruits.

The flour beetle is one to two centimeters tall. This elongated beetle prefers to fly into the apartment on mild summer evenings. The longitudinal grooves that run over the slightly curved cover wings are typical. While the body of fully grown beetles is black in color, the legs, antennae and underside of the body appear reddish brown. Females lay their eggs in protected areas from which the typical mealworms develop. They feed on animal feed, flour and grain products. These insects can be up to ten millimeters long and have a compact, rounded to oval body. There are also mini-beetles one millimeter in size. The family contains several genera, the types of which differ greatly from the outside. A brown to black basic color is typical. In many bacon beetles, this is covered by red, brown or yellow scales, so that a pattern of spots appears. The elongated larvae are covered with bristly tufts of hair and often have defense hair.

Since it is difficult to get rid of bacon beetles, preventive measures are particularly important. You should check stored food regularly and dispose of it immediately as soon as you discover larvae or beetles. Cereals, flour, pasta, dried fruits and nuts are particularly affected. Seal them well and clean cupboards regularly with disinfecting and natural home remedies. Thorough ventilation, knocking out carpets and vacuuming sofas are important measures to eliminate possible sources of food.

Bacon beetles are one of the most feared pests in the home. They arise out of nowhere and are difficult to get rid of.

There are several species in this family that can appear as storage pests. Fighting brass beetles, Australian thief beetles and herb thieves or other pests is not easy because of their hidden way of life. In order to deprive the vermin of their livelihood, you should remove organic residues such as crumbs and animal feed and thoroughly clean all niches and cracks.

From this family of beetles, the common rodent beetle appears as a wood pest. It becomes up to four millimeters long and produces larvae that can reach a body size of seven millimeters. These prefer to drill into softwood and hardwood, where they leave holes behind. The round exit holes with a diameter of one to two centimeters from which the flyable beetles swarm are noticeable. The species attacks furniture, wood paneling and carvings, and floors.

To drive away the pests, you can rub infested wood with a fresh onion. Acorns are laid out to attract the larvae. As soon as these have established themselves in the tree fruits, they can be disposed of. This pest of storage and material can also occur in the framework if the wood is already damaged. Otherwise, the two to three millimeter long beetle, the top of which is covered with fine hairs, attacks starchy foods. It is often found in bird nests, but gets into the apartment through bread products or spices.

The humpback beetle is known as the ball beetle because of its round shape. It reaches a size between one and three millimeters and has shiny and smooth wing covers. These are brownish to red in color. The long antennae are noticeable. Since humpback beetles are nocturnal, an infestation is usually discovered late. They occur as a hygiene and material pest and occur in old buildings and half-timbered houses. The beetles nest in cavities and infest food that is contaminated with residues. Combating is extremely difficult.

This culture follower is between two and four millimeters long and is characterized by light and close-fitting hair. Its head is typically broad and has protruding compound eyes. The six small teeth on each side of the pronotum are striking. Cover wings are covered by raised longitudinal ribs. The beetles appreciate food rich in carbohydrates and, in addition to pasta and grain products, also eat chocolate, almonds and other nuts. Their whitish larvae feed on flour, which becomes damp and lumpy.

These insects are not beetles, but represent their own order. The cockroach is a species that can be considered a pest. It grows up to 14 millimeters and prefers warm and humid habitats. The insect nests in hidden niches behind moldings and panels, door frames and supply shafts. The cockroach is not picky about food. It eats anything and can transmit diseases or cause allergies.

These insects belong to the order of the Schnabelkerfen, which are related to the beetles. Your body is divided into head, chest and abdomen, so that a typical appearance is created. The insects are variably colored and can be monochrome green or brown to striking black and red.

They get lost in apartments and buildings when they are looking for suitable winter quarters. Since they do no harm, there is no need to fight them. It is enough if you catch the animals and bring them outside. Close possible entry gates.

Put water with a few drops of mint oil or a clove of garlic in a spray bottle and spray it on window frames and door sills. That keeps bed bugs out of your apartment.

Are there beetles that prefer to stay in certain rooms?

Depending on the food spectrum and habitat requirements, pests appear in different rooms. Parquet beetles can spread anywhere in the home where dry wooden floors or furniture can be found. Bread beetles prefer to nest in the kitchen, because this is where their larvae find optimal feeding conditions. When the adult beetles swarm out, they can often be seen at the window. Often they sit motionless against the walls. The location provides you with information on the respective species.

The beetle in the house looks weird. What could that be?

In the realm of insects there are very unusual shapes and body shapes that do not look like typical beetles at all. Occasionally, such insects get lost in houses and apartments when the animals are looking for a place to hibernate. Such a phenomenon could be observed in Bremen in 2018, when loads of strange bugs broke into buildings. It was the American pine bug, which is considered harmless.

Which bugs live in the house in winter?

Many types of bacon beetles occur as vermin that can also be observed in heated rooms in winter. These include museum beetles, carpet beetles, cabbage flower beetles and fur beetles. In nature, the insects overwinter in the larval stage, so that they hatch in the coming spring and swarm out in search of a mating partner. The typical development cycle for most species is about a year. If the environmental conditions are good all year round, the development is shortened and the vermin can produce several generations per year.

What are the most common bugs that can appear around the house that damage supplies or materials?

There are a number of beetles that prefer to settle in food or materials in a human environment. The success of the control depends on the way of life, which can be more or less hidden depending on the species. Regular control measures and thorough cleanliness are of great importance in order to get the pest infestation under control.

The most common beetle pests include: