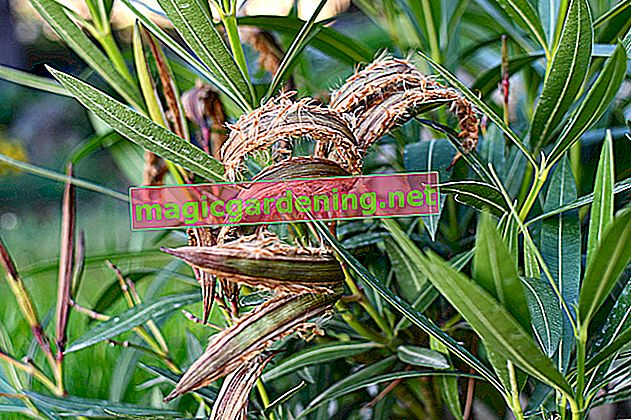 If the leaves are green and firmly attached to the shoots, but at the same time bone dry and crumble easily, then they have probably been damaged by frost. This can also occur if the plants have supposedly been made winter-proof - for example, they have been wrapped up warm or have overwintered in a (not frost-proof) garden shed. With the frost-sensitive plant, a frosty night is often enough for the oleander to freeze to death. Whether the affected specimen can still be saved depends above all on the nature of the roots: If these are intact, you can cut back the oleander and it will sprout again. However, if the roots have also gotten frost, the plant can in most cases no longer be saved.

After clearing out the oleander, slowly get used to the sun

If the oleander gets dried up leaves after winter, it is not necessarily due to winter damage. Much damage is also caused by clearing the winter quarters too quickly. As a general rule, you should not place the oleander in the sun directly from the darker winter. Instead, the shrub belongs in the shade for hours. The outside hours and the hours of sunshine are only slowly extended.

Water the oleander regularly even in winter

Another common mistake when overwintering the oleander is that watering is forgotten or done too rarely. Oleander needs significantly less water in the cold season than during the growing season, but should still be watered about once a week.

Dried leaves, inflorescences and shoots after the winter break are also often a sign of so-called dry rot (ascochyta), a fungal disease typical of oleanders. This usually occurs during or after wintering and attacks the above-ground parts of the shrub and then gradually migrates towards the roots. This disease can only be countered with preventive injections.