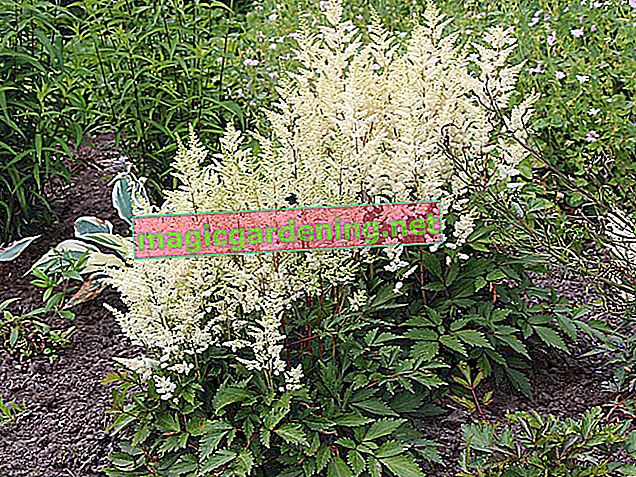 Astilbes have a long tradition in German gardens, as they have been used as an ornamental plant since the 19th century. Hardly any other perennial blooms as strikingly colorful as the splendid spar, the German name of the astilbe, even in deep shade. From a botanical point of view, the genus belongs to the saxifrage family (Saxifragaceae) and includes around 35 different species, most of which come from East Asia - and especially from China - and the eastern United States.

Here, the magnificent plants are mainly to be found in light forests as well as in damp locations, for example at the edge of the forest or on the banks of streams or rivers. The uncomplicated Arendsii hybrids (Astilbe x arendsii) and the Chinese Astilbe (Astilbe chinensis) are particularly interesting for the garden.

There is a large selection of astilbe suitable for the home garden in different growth forms and heights. Some species, such as the dwarf splendor spar (Astilbe chinensis var. Pumila) that grows pillow-like and can reach a height of up to 30 centimeters, are wonderfully suitable as ground cover and thrive even under trees and other woody plants. Here, over time, the rhizome-forming plants spread over a large area and cover unsightly, bald spots where hardly anything else grows.

High-growing species are best planted flat or in the border together with other shade-friendly species. Cranesbill (Geranium), bellflower (Campanula), elven flower (Epimedium), silver candle (Althea), autumn anemone or hosta (hosta) are attractive companions. Especially in combination with ornamental foliage perennials (which include the popular hostas), astilbe is particularly effective. Since the plants also bloom quite late, they can be easily socialized with onion flowers that bloom in spring.

Astilbes grow well on the edges of trees and along streams and garden ponds. White-flowered varieties in particular are also the right choice when shady garden areas are to be optically brightened.

Splendid sparrows are herbaceous, perennial perennials that can become quite bushy depending on the species and variety. Individual specimens of the higher growing varieties are on average between 40 and 60 centimeters wide. The height of growth, which can be between ten and up to 150 or even 200 centimeters, is also dependent on the variety. The bald splendor (Astilbe glaberrima var. Saxatilis) remains particularly low, while some Chinese astilbe and the Thunbergii hybrid 'Professor van der Wielen' are considered to be particularly tall.

Also characteristic of the genus are the thick, underground rhizomes, through which the plants can be divided and multiplied.

The large, basal foliage leaves grow from the rhizomes, which initially sprout from bronze to reddish in spring and only turn deep green in summer. The foliage is divided in many ways and is divided into a petiole and a leaf blade, with the latter having one to multiple pinnacles. The alternately arranged leaves typically get smaller and smaller towards the top. The plants also often have stipules.

Also from the rhizomes grow mostly upright or slightly overhanging, up to 200 centimeters high flower stems. Between June and September the flower panicles, up to 55 centimeters long, unfold on these and bloom for weeks in different colors depending on the variety. While the wild species usually have white flowers, numerous colors could be bred out of the cultivated forms. The spectrum ranges from white, yellow and pink to dark red and even purple flower colors. The flower panicles, freshly opened, can be cut off and used for long-lasting dry bouquets.

The specific flowering time depends on the variety. The Japanese astilbe (Astilbe japonica) and their hybrids, for example, which show their splendor between June and July, bloom early. The more frequently planted and colorfully blooming species of China astilbe (Astilbe chinensis) and the popular Arendsii hybrids, on the other hand, bloom quite late between August and September, and often into October if the weather is mild.

However, you can leave the inflorescences on the perennials so that pretty fruit bunches develop by autumn. These usually stay on the plant over the winter and are an interesting eye-catcher in the winter garden. The fruits are capsule fruits that contain a lot of small seeds.

Astilbes are not poisonous to humans or animals. Instead, mainly the young leaves of some species - such as Astilbe chinensis or Astilbe thunbergii - can be eaten cooked or used for a tea infusion. In addition, splendid sparrows are valuable and nectar-rich insect pastures that bees, bumblebees, butterflies and other hungry insects love to fly to.

As in their natural range, astilbe especially feel at home in shady and partially shaded locations, for example in the protection of large deciduous and coniferous trees. Along the edges of trees, along streams and pond edges, the plants find the right location for their needs, provided they are not in the blazing sun. Midday sun in particular is poorly tolerated.

In principle, splendid sparrows also grow in sunny places, provided the soil there is sufficiently moist. As a rule of thumb, the sunnier the location, the wetter the soil must be. Waterlogging, on the other hand, should be avoided, because the moisture-loving astilbe also react with root rot.

So that the splendid spar lives up to its name and continues to bloom magnificently, it needs the right soil conditions. The perennial feels good in substrates that

are made. Heavy or sandy soils can be upgraded with plenty of ripe compost.

Astilbe can be cultivated in sufficiently large and, above all, wide planters, provided a continuous water supply is ensured. Regular watering is immensely important with Topfastilben because the substrate should not dry out even for a short time. At the same time, ensure that the pot is well drained (a drain hole on the bottom of the pot is mandatory!) So that waterlogging does not arise in the first place. The substrate should be moist, but in no case wet. Choose a high-quality potting soil, preferably without peat and based on compost, which you mix with clay granulate or perlite (€ 32.90 at Amazon *).

When planting the astilbe, ensure that the planting depth is sufficient, as the root ball often pushes up over time. Magnificent sparrows can be planted comparatively deep. Before planting, place the plants in a bucket of water so that the roots can soak up the moisture and mix the excavated material with plenty of ripe compost and horn shavings. (€ 6.39 at Amazon *) After planting, water vigorously and mulch the soil area if possible. This means that the moisture stays in the soil longer and does not evaporate as quickly.

Astilbees are best planted during the dormant period between November and March. Choose a frost-free day with mild weather.

The correct planting distance depends on the variety of astilbe planted, because the different species are different in height and width. For larger specimens, choose a distance between 40 and 60 centimeters, while smaller versions are satisfied with 20 to 25 centimeters.

Astilbes depend on a balanced water balance. The root ball must neither dry out nor be constantly wet. A well-drained soil is therefore important, and you should also especially during longer dry periods - especially during the flowering period, because then the plants have a particularly high water requirement! - check the moisture content of the soil. To do this, stick a finger into the earth - if the surface is dry, pour soft rainwater or well stale tap water. Use a watering can and water directly on the root area. Leaves and flowers should not be moistened.

The magnificent spar not only has a high water requirement, but also a high nutrient requirement. The development of the strong foliage and the large flowers is detrimental to the plants, which is why balanced fertilization is important. To do this, you can apply a slow-release fertilizer between April and May, which you can refresh again in July if necessary. Alternatively, provide the plants with a shovel of compost and a handful of horn shavings about every four weeks between May and August. (€ 6.39 at Amazon *) In contrast, specimens cultivated in pots are fertilized with a liquid complete fertilizer.

Astilbe do not have to be cut, only the withered flower stalks and dried or dead plant parts can be removed in spring.

As a rule, astilbe is multiplied by division. To do this, dig up the plants and their rhizomes from the ground in spring or autumn and divide them into several pieces of roughly the same size. These are then replanted and cared for as usual. Parting is a great way to keep rejuvenating the plants. You can watch the astilbe when it is time to share again: the perennials then become too big and begin to bald.

Dwarf astilbe can also be propagated using root cuttings; original species (not hybrids) and non-seed variants can also be grown from seeds.

How to grow astilbe from seeds

It is best to sow astilbe in autumn or spring, for which you can use seeds that you have collected or bought. And this is how sowing works:

As soon as the plants are big and strong enough, they can be planted out in the garden.

Basically, astilbe are sufficiently hardy and therefore do not need winter protection. Only young plants and specimens cultivated in pots should be protected from frost. For this purpose, cover planted splendid sparrows with straw, spruce or fir twigs or leaves. The pot of potted plants, on the other hand, should always - even in later years - be wrapped with bubble wrap or another suitable material and placed on an insulating surface (wood, styrofoam, etc.).

Astilbe can be transplanted well in later years, but you have to dig them up carefully. In any case, this measure makes sense because the perennials should be divided from time to time anyway. Bald parts of the plant can be easily cut off with a sharp knife when moving, so that you only need to reinsert the young and fresh segments.

As a rule, astilbe are hardy and robust plants as long as they are comfortable in their location. Diseases therefore usually only occur as a result of an unsuitable location or incorrect maintenance. The leaves roll up as soon as the splendid spar is too dry or too warm. Brown leaf margins also indicate a lack of moisture. Yellow-colored leaves, on the other hand, are often an indication of calcareous soil, which astilbe also do not like. If, on the other hand, the plant does not want to grow properly, it is in the wrong location. Although it generally feels very comfortable under trees and bushes, it must not be planted on the root disc of shallow-rooted woody plants. Here the different species only compete unnecessarily for water and nutrients.

Occasionally, aphids and other leaf-sucking insects attack the astilbe. An infestation by leaf bugs, leaf or root elbows and the black weevil also occasionally occurs.

If astilbe does not want to bloom, a lack of nutrients is often the cause. The plants have a high need for nutrients and can only cover this when planted in the garden with regular fertilization.

Astilbes come in different shapes and sizes: While the small varieties often do not grow taller than 30 to 40 centimeters, some of them even form flat carpets through the formation of runners, the high splendid sparrows can reach heights of between 150 and 200 centimeters.

One of the most popular hybrids with numerous white, pink or red flowering varieties. Reaches heights of between 60 and 120 centimeters.

The Chinese astilbe produces rather short varieties with heights between 25 and 50 centimeters. An exception is the variety Astilbe chinensis var. Davidii or Hohe Astilbe, which can be up to 180 centimeters high.

Low-growing perennial, needs high humidity and nutrient-rich soil. The numerous varieties reach heights of up to 50 centimeters and bloom quite early between June and July. Many shades of color.

Shade shrub with rather low, graceful growth. Varieties usually bloom in pink, red or white between July and August.