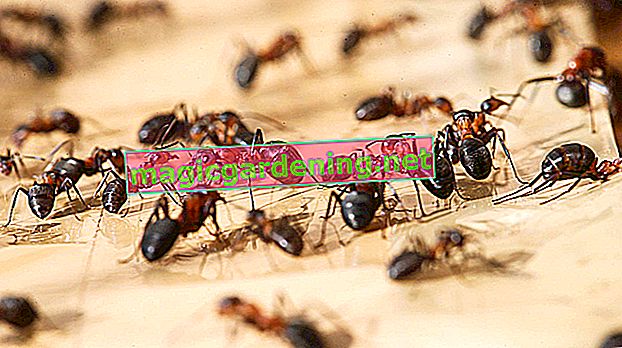 The animal-friendly gardener does not condemn busy ants to death just because they have settled in the lawn. Instead, ant control aims to motivate the insects to move to another shelter. However, this undertaking is only crowned with success if the queen joins her people. This is how the plan works:

Give the ants a few days to move. Long rows of workers carrying the offspring into the pot are a sure sign of success. As soon as the caravan is over, pick up a spade, slide it under the pot and carry the people to a safe place.

Tip 2: Worry about smells - this is how it works

Ants are endowed with a sensitive sense of smell, which is primarily used for orientation. With intense smells, this perception is paralyzed to such an extent that the hymenoptera full of gnomes seek the distance. In this way, the plague of ants in the lawn quickly comes to an end without having to take out the chemical club. These fragrances promise maximum success:

If ant nests are repeatedly sprayed with these liquids, the workers pack the suitcases and the whole colony moves out. Essential herbs that have proven themselves in natural ant control have a similar effect. If you put eucalyptus, anise, sage, lemon balm, lavender and similar herbs around the ant nests, the ants' plague will be history within a short time.

If the plague of ants gets out of hand in the lawn, knowledgeable gardeners get help from the predators of the pests. The following animals in the garden like ants to eat:

One of the most dangerous enemies for ants is the ant lion, the insect of the year 2010. The clever ant lion catches the crawling animals with a self-made funnel trap on fine-grained sand. All these beneficial insects like to settle in the natural garden. You should therefore create places of retreat such as a dry stone wall, dense hedges, rotten tree trunks or piles of leaves

Tip 4: End the ants plague with nematodes without toxins

Natural antagonists of a special kind have included ants in their prey scheme for millions of years. We are talking about nematodes, tiny nematodes that were discovered in fossil workers. In modern ant control, the nematodes of the genus Mermis are applied as a non-toxic preparation to the ant nests, where they remove the plague of ants from the world.

Tip 5: Disrupt your orientation with vinegar and tea tree oil

Functioning ant nests depend on the workers finding their way back there again and again, richly laden with food for the brood. For this purpose, the insects mark the walkways with their own fragrances. The people are doomed when these scents are masked. Vinegar is ideal for this purpose, as is the slightly milder tea tree oil.

Spray the paths towards the lawn and ant nests every few days with vinegar water or diluted tea tree oil, this measure ends the ants plague in no time. It is important to note that you do not spray the liquid directly onto the grass.

The yellow meadow ant is one of the most common ant species in Europe. Their ant nests are mainly located in lawns or meadows and are usually completely overgrown. A single colony houses from a few hundred to several thousand workers. 100,000 workers cavorted in the largest building discovered so far.

The raising agent baking soda has earned a good reputation in the field of ant control. However, baking soda alone has no effect against the ants plague. Only in combination with sugar do you draw a line under the ants plague in this way. Repeatedly scattered on the ant nests, the pests eat the mixture and perish on the released ammonia.

Tip 7: catching ants with beer - this is how it works

Best known as an effective remedy against voracious snails, the beer trap also meets expectations against an ant plague in the lawn. How to do it right:

Since they are crazy about sweets, the ants crawl into the plate and drown in the alcoholic liquid.

In view of the hustle and bustle around ant nests, it is astonishing, but the nuisances actually want to have their peace. Regular lawn care is therefore an effective way of making the crawling animals as uncomfortable as possible. How to fight ants through disturbance of the peace:

The annual maintenance liming of the lawn not only prevents over-acidification of the soil; at the same time, ants will be careful not to build a new burrow in a limed lawn.

In domestic ant control, frowned upon, you can sustainably tackle an ants plague in the lawn with the smell of plant manure. You can easily make nettle manure yourself and use it to spray ants' nests until the beasts move away. Using the following recipe, you can not only make nettle liquid yourself, but also other mixtures, such as vermouth or leghorn brew:

After completion of the fermentation process, the liquid manure is strained and is immediately ready for use. Diluted in a ratio of 1:10, spray the ant nests in the lawn repeatedly. Include the entire lawn and fertilize the green naturally at the same time.

Tip 10: combating aphids drives away ants - this is how it works

Ants are not far away where aphids frolic on plants. It is the honeydew excreted by the pests that attracts the ants. Ant control in the garden therefore goes hand in hand with lice containment. If you are confronted with a plague of ants in the lawn, deprive the insects of their food source by the following procedure against aphids:

In addition, the specialist trade has pesticides on the basis of neem or rapeseed oil, which have proven to be effective against aphids and thus also make the garden unattractive for ants.

The longest life span of a queen ant was 28 3/4 years. The specimen was caught in August 1931 and only blessed the temporal in April 1960. It was a mated queen of the black garden ant, who laid fertilized eggs until she died.