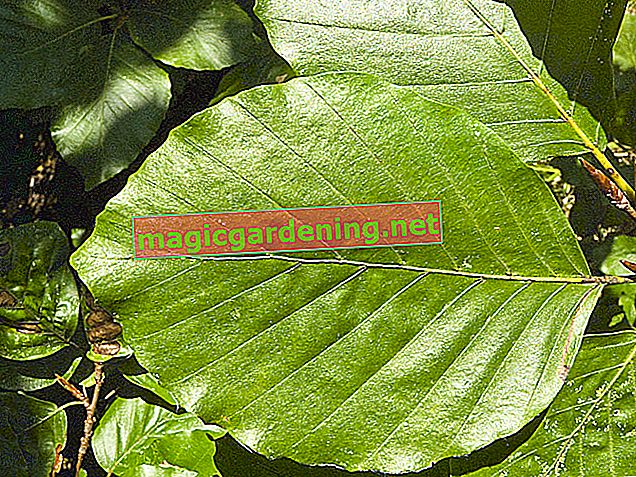 The beech: a profile

Hornbeams are not beeches

Even if they are often counted among the beeches, hornbeams are not beeches, but birch plants. Its botanical name is: Carpinus betulus.

Hornbeams have harder, more resilient wood. The demands on care are similar for both tree species.

In Germany only the common red beech plays a major role. In addition to the common beech, copper beeches and weeping beeches are also grown.

The name red beech is misleading because the beech has green leaves. Only the copper beech can be recognized by its dark red foliage. The beech is called red beech because of its slightly reddish wood. It takes on a red tone under steam.

What are beeches used for?

Beeches are very popular as a hedge plant in the garden. As individual trees, they need a lot of space and are therefore mainly planted in large gardens and parks.

Beech wood is very easy to work with. However, it warps quickly, so that it is not used as often as industrial wood like hornbeam wood, for example.

Beeches offer shelter to a wide variety of insects. The tree crown and beech hedges are often used by birds to build their nests.

Special features of the beech

A special feature of the beech makes it a popular hedge plant. The tree, which is well tolerated by pruning, often keeps the foliage well into winter. In some species, the leaves only fall off when the beech tree sprouts again. A beech hedge is also opaque in winter, although it is actually summer green and not evergreen.

The fruits of the beech are called beechnuts. In contrast to the leaves, they are slightly poisonous. In times of need they still came on the table, because the poison can be neutralized by roasting or heating.