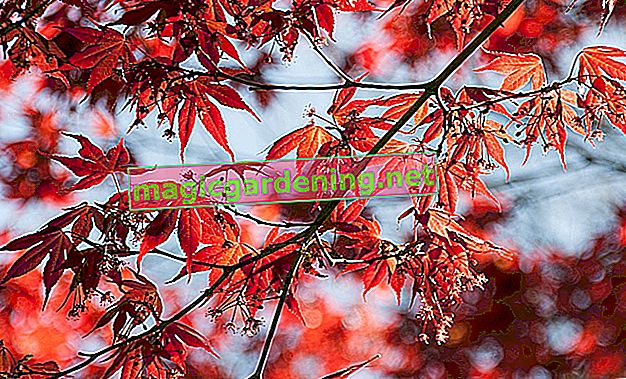 How often do you have to water the Japanese maple?

Since the Japanese maple is one of the shallow-rooters and also always prefers a slight moisture, regular watering is essential, especially in the hot and dry summer months. Make sure, however, that no waterlogging forms, because the tree is extremely sensitive to this. It is best to water in the early morning or evening hours, whereby the leaves should not be wetted.

Do you have to fertilize the Japanese maple?

A single fertilization at the beginning of the growing season is sufficient, preferably with ripe compost (leaf compost is ideal) or a depot fertilizer.

When and how can you cut the Japanese maple?

The Far Eastern deciduous tree should not be cut back if possible, as it is very sensitive to it and in the worst case can even die. Dry and diseased branches or shoots are best removed in spring or summer, cutting measures in autumn or winter should be avoided.

What are the special care instructions for a Japanese maple grown in a bucket?

Bucket maples absolutely need very good drainage to prevent waterlogging. It is also best to always water when the surface of the substrate has already dried and there is no water in the coaster - the coaster should always be emptied after watering.

How often should you repot a Japanese maple in the bucket?

Plant the young Japanese maple in as large and wide a tub as possible so that the tree only has to be repotted after about four to five years.

What diseases and pests are common in the Japanese maple?

The Japanese maple is particularly endangered by Verticillium wilt, an always deadly fungal disease. Otherwise powdery mildew often occurs if the watering is incorrect - especially if the leaves are wetted in summer.

The leaves of the Japanese maple are brown, what should be done?

Brown leaves are usually an indication of improper watering with either too much or too little water. However, Verticillium wilt can also be behind it.

Can verticillium wilt be avoided on the Japanese maple?

Pay attention to a suitable location as well as proper care, especially with regard to watering. In addition, the Japanese maple should never be planted in a place where Verticillium wilt has already occurred - the fungal spores are very stubborn in the soil, so that even replacing them is not expedient.

Is the Japanese maple hardy?

Many species and varieties of the Japanese maple are quite hardy and can be overwintered with a few protective measures. Pay attention to the descriptions on the respective variety label.

Trees affected by Verticillium wilt can sometimes be saved by generously cutting away all infected shoots and branches.