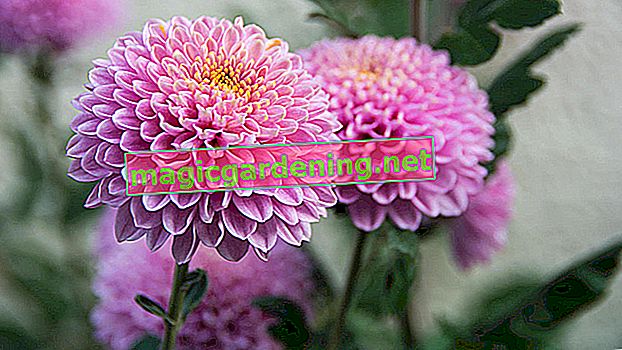 As a typical autumn flower, most chrysanthemums bloom as soon as the days shorten. Before that, it puts its energy exclusively into shoot growth, which you should regulate over the course of the growing season. Many new shoots remain thin and later simply fall over. You can strengthen them by pruning these shoots back several times, thus stimulating stronger branching and stronger shoots. This is done through

You should also pay attention to the number of shoots: if there are very many, thin out the bush and remove some of the shoots completely. No pruning will take place during flowering unless you remove dead stems. This measure, in turn, extends the flowering time because the plant keeps developing new flowers.

Pruning chrysanthemums before or after winter?

Finally, the final pruning takes place in which all shoots are cut off to just above the ground. When this pruning takes place is entirely up to you. Some gardeners let the stems stand through the winter and only cut them in late winter or early spring. Others shorten the plant to make it winterproof. Both methods have their pros and cons, so you'll have to try out for yourself what is good for your chrysanthemums.

If you prune your chrysanthemums in summer, you can also win head cuttings for propagation. Proceed as follows:

The cuttings need a bright and warm place, but without direct sunlight. In particular, the midday sun is not tolerated. Temperatures of around 20 ° C are also ideal for rooting.

Most chrysanthemums need a support, for example a support rod, from around the beginning of the flowering period (ergo in August).