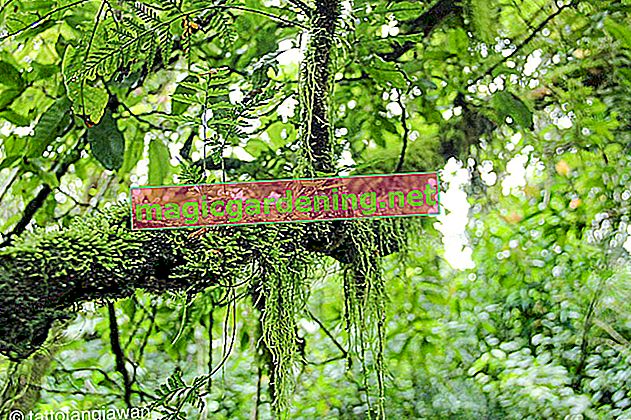 Most species of the genus Epiphyllum are native to Central and South America as well as the Caribbean, where they grow as epiphytes on the tall trees of the tropical, humid rainforests. Above all, hybrids of wild species that look very similar to one another can be found in trade. These are considered less demanding than their parent species and are therefore easier to care for as indoor plants.

Due to their tropical origin, Epiphyllum leaf cacti are not hardy here and are therefore mainly cultivated as indoor plants. The plants, which are very sensitive to the cold, may only be used on the terrace or balcony during the warm summer months, but should not be exposed to the blazing sun there. Most species and varieties have a pendulous habit, so you can keep them as a hanging plant. If this is not desired, the long shoots should either be supported or tied upwards.

All Epiphyllum leaf cacti grow either epiphytically or lithophytically, ie as epiphytes on trees or rocks. The different species grow shrub-like, developing either hanging or climbing and only rarely upright shoots. The long shoots are often heavily branched and become lignified with age. In contrast to the round older ones, young shoots are rather flat and are not dissimilar to leaves - however, despite all the external similarities, they are not deciduous leaves. Thorns are usually absent. Some species develop some, but these only remain very small.

The individually standing, mostly funnel-shaped flowers can become very long: some Epiphyllum species impress with flowers up to 30 centimeters in size, which can also be colored in almost all colors except blue. The wild species mostly have white, yellow or pink flowers on the outside, which are pale yellow or whitish on the inside. The flowering times differ greatly depending on the species and variety. Incidentally, many species do not bloom until they are around five years old, which is why a lack of bloom cannot necessarily be attributed to inadequate care.

In this country, due to the lack of pollinators, fruits are rarely formed. However, you can buy the black, kidney-shaped seeds in specialist shops and use them to grow your own plants.

Epiphyllum leaf cacti prefer a bright and warm location that is not exposed to strong sunlight. A partially shaded place is best, which offers protection from the scorching sun, especially around lunchtime. If the location is too sunny for the plant, this can quickly be seen in leaf burns. In summer you can put the leaf cacti outside, but you should also protect them from the midday sun and rain. When it comes to housing, a high level of humidity between 60 and 80 percent is also important.

Even if epiphylenes are cacti, the commercially available cactus soil is unsuitable as a substrate. Leaf cacti have a high nutritional requirement that cannot be met by cactus soil. Instead, use special soil for leaf cacti (available from specialist retailers) or mix this yourself from normal potting soil and a third of bark mulch, pumice gravel or quartz sand (€ 14.90 at Amazon *) - it is important that the substrate is well permeable and waterlogged so cannot arise in the first place.

Most Epiphyllum leaf cacti grow hanging, which makes them good for hanging baskets. Alternatively, you can plant them in a tall planter so that the long shoots can hang down. Species that are taller than 20 centimeters should either be cultivated as an ampelous plant or supported in any case. When planting, it is not only important to have the right substrate, but also to have good pot drainage. Leaf cacti need a lot of water, but they shouldn't stand wet. The plants therefore thrive best in planters with an automatic irrigation system. (€ 69.29 at Amazon *)

Since young plants often grow strongly, you should move them to a larger pot every year. In addition, the substrate is used up after three years at the latest and should then be replaced. The best time to repot is spring.

Even if the classic cacti like it rather dry: As a typical rainforest inhabitant, the epiphyllus leaf cactus needs moisture and does not cope well with drought. The plant does not like dried out substrate, as does waterlogging, by the way. Therefore, keep the soil evenly moist, but not wet, during the growing season. Remove excess irrigation water as soon as possible and use rainwater or decalcified tap water if possible - leaf cacti do not tolerate calcareous water. It is also important to observe these special instructions when pouring:

There are also some special features to consider with regard to fertilization. Leaf cacti have a very high nutritional requirement, which is why you should never provide them with cactus fertilizer - this is not adapted to the needs of the Epiphyllum species. Instead, take a normal house plant fertilizer, which you give in half the dose every 14 days between April and September. But be careful: highly nitrogenous fertilizers quickly lead to over-fertilization, which is why whole and blue-grain products are not suitable. It is better to use a low-nitrogen fertilizer, as this promotes lush flowering better. There is no fertilization during the winter months.

Epiphyllum leaf cacti are very compatible with pruning, but should only be pruned when really needed - for example because they have become too big for their location. The plants develop a more or less symmetrical growth on their own, which can become uneven if the scissors are incorrectly positioned. Only sick, dead or broken shoots and dead flowers should be removed. Cut this off just below the flower head.

Epiphyllum leaf cacti are easy to propagate by cuttings or by sowing, whereby you have to be patient when propagating the seeds: Depending on the type and variety, the germination time is several weeks to even months.

To propagate cuttings, cut off healthy shoots approx. 15 centimeters long in early summer, the interfaces of which must dry out for one to three days before planting. Then place this about three centimeters deep in a planter filled with growing substrate (9.05 € on Amazon *) or unfertilized coconut soil and keep it slightly moist for the coming weeks. As a rule, most leaf cacti can be rooted quite easily and show their first growth after just a few weeks.

You can obtain the seeds for sowing either from specialist retailers or by collecting the ripe fruits from your leaf cacti. The ideal time for sowing is spring. Sow the black seeds on unfertilized coconut soil, coconut gum or special coir pellets and do not cover them with substrate under any circumstances - all species are light germs. It is best to place the planter in an indoor greenhouse or cover it with translucent film or glass. Keep the substrate moist by spraying it with lime-free water.

For a lush flowering of the Epiphyllum leaf cacti, a winter rest phase is important, during which the plants are a little cooler at ten to a maximum of 15 degrees Celsius and are also only little watered and no longer fertilized. Nevertheless, a lot of light is required, which is why the leaf cacti should be as bright as possible even in winter. A permanently warm overwintering is harmful to the plants as it weakens them and makes them more susceptible to pathogens and pests.

With proper care, Epiphyllum leaf cacti are insensitive, robust houseplants that are rarely afflicted by diseases. If the plants are still ailing, the cause is mostly to be found in incorrect care:

With all signs, the only thing that helps is to cut back the diseased parts of the plant generously and to transfer them to fresh substrate and a new pot. Spider mites as well as mealybugs and scale insects often appear on pests.

In winter, leaf cacti should not be sprayed, otherwise they tend to rot.

Epiphyllum are an epiphytically growing plant genus from the cactus family (bot. Cactaceae), which, due to their shrub-like growth, are counted among the leaf cacti together with species of various cacti genera. These include, for example, the Christmas cactus and the Easter cactus, which, however, belong to other genera and are only distantly related. There are around 17 different Epiphyllum species, with mainly special hybrid forms being cultivated. These are considered to be less complicated and often form large, fragrant flowers several times a year.

The following species and cultivars are particularly recommended: