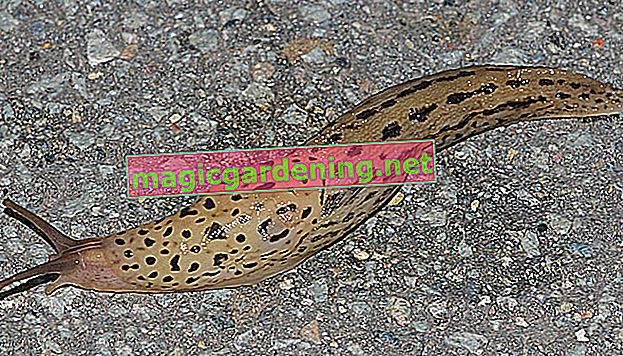 The tiger snail - a voracious beneficial insect in the garden Whoever sees the tiger snail - or tiger snail - for the first time will probably first classify it as a nudibranch and thus a pest. The opposite is the case, because the mollusc with the characteristic appearance is related to the well-known slugs, but also likes to eat them. The animals are very effective and even hunt specimens that are larger than themselves. Tiger snails also like to eat

Tiger snails, on the other hand, rarely go to fresh green. The animals have a high protein requirement, especially when they are young, and only reach sexual maturity if they can meet their needs. For experimental purposes, young tiger snails that were fed purely vegetarian were all soon received.

So it is a good idea to bring a few tiger snails into the garden against the nudibranch plague. For this purpose, you can collect the animals in forests and parks or buy them from specialized dealers.

Is the tiger snail poisonous?

Tiger snails are not poisonous. So you don't have to worry if your dog or cat accidentally eats one of these specimens. However, you should refrain from touching the snails - not because they could be poisonous, but because this puts the animals under extreme stress and harms them. After all, the tiger snails should be doing well in your garden so that they can eagerly devour other slugs.

Recognize tiger snail and distinguish it from other species

“Tiger snail eats snail - have you seen that before? These mollusks prefer to eat other slugs and are therefore very useful. "

As a rule, tiger snails can be easily distinguished from other nudibranchs due to their characteristic appearance. The species bears its name for a reason, after all, the light body is adorned with a striking pattern with black spots and stripes. In contrast to the name, this is more reminiscent of the typical leopard pattern.

The tiger snail in the profile:

In addition to these, however, there are also spotless, single-colored, dark and white varieties, which are very rare. The latter are tiger snails with albinism. Also typical of the tiger snail is the conical body, which is tightly rounded at the rear edge. The mantle shield covers about a third of the body's length, but there is a special feature here: Tiger snails have a chalky shield about 13 to 15 millimeters long, which is the evolutionary remnant of a shell.

To make it easier for you to distinguish it from other slugs, we have put together an overview for you at this point.

One thing all nudibranchs have in common is that they all need a rather damp habitat with numerous hiding spots in order to survive.

Tiger snails are nocturnal and prefer to come out of their hiding place around midnight. This means that you will rarely see the animals - after all, they hide during the day and only hunt at night. So you can already have the snail hunter in your garden and know nothing about it.

The animals are hermaphroditic, so they have both male and female sexual characteristics. When mating, two individuals exchange their seed packets and thus fertilize each other. However, self-fertilization has already been observed in captured specimens, so these slugs are not dependent on a partner for reproduction. The subsequent laying period lasts almost a year in which a single snail lays up to four clutches with between 100 and 300 eggs each. The first egg-laying usually takes place between July and August of the first year, the second, however, not until June or July of the following year. The eggs are quite small with an average size of four to five millimeters. The small, still white and inconspicuous tiger snails hatch after about 19 to 25 days, i.e. about three weeks. They gradually darken in the course of their development and develop the typical pattern up to sexual maturity at around one and a half years. The first spots and streaks appear about a week after hatching.

Tiger drumsticks live around two and a half to three years old, provided they have not previously fallen victim to a predator or disease. The clutch is also very susceptible to parasites and predators such as beetles, nematodes and mites. Therefore, tiger snails only hatch from a few eggs. However, you can specifically increase the rate of reproduction by breeding in the terrarium and thus ensure plenty of offspring for your own garden.

The unusual behavior when mating

Tiger snails show a very interesting mating behavior: the hermaphrodites - that is, each animal is both male and female - mate looped around each other, dangling in the air and only hanging from a thread of mucus up to 40 centimeters long. However, it will take some time to get to that point. First of all, an animal crawls after its chosen one for hours. If he is finally convinced by this expression of interest, the snails circle each other and finally move to a higher place for the actual act.

How to settle the tiger snail in the garden

In suitable habitats, tiger snails are true to their location and form real colonies over time. In order to establish and keep the animals in your garden, it is important to set up suitable shelters. The nocturnal animals withdraw into this during the day. Ideal for this purpose are: Since the animals are always around five to ten meters around the roost, you should create the shelter as close as possible to endangered beds or in the center of the kitchen garden. It is also useful to create several “nests” in order to cover larger areas. If you offer the tiger snails good living conditions - that is, a naturally managed garden with sufficient damp spaces - they will reproduce well and form a stable population over time. You can also feed newly settled specimens, for which they should use protein-rich foods. These include, for example, mushrooms such as mushrooms from the supermarket, which you cut into slices and distribute at the dwelling.

To establish tiger snails in the garden, you should avoid slug pellets. This kills not only the slugs, but also the useful snails.

This article shows what else can help against voracious nudibranchs in the garden.

Can you also buy the tiger snail?

If you want to establish the tiger's leg in your garden, you can buy the animals in specialized online shops or from specialist dealers. The best time to do this starts in spring, when it gets warmer outside and frosty nights are less likely. Depending on the region, you can purchase the Schnegel between mid-March and mid-April and into October and put it in the garden right away. The cold-blooded animals spend the winter well hidden under piles of leaves, in compost or in rotten wood.

However, it will take a lot of patience, especially if you have tons of nudibranchs in your garden. In order to combat these effectively with the help of tiger snails, you would also need a lot of them. However, you cannot buy all of them, but acquire some of the animals, which then gradually multiply thanks to your careful care and maintenance. However, it may take a few years before a snail-effective population has grown from this. In addition, factors that you cannot influence (such as the weather) can have a decimating or beneficial effect on your tiger snail population.

In any case, tiger snails are not the only snail fighters, as the omnivores also eat other foods and do not constantly hunt their fellows. For effective control, you should therefore rely on a mix of tiger snails, other predators and other, of course, non-toxic measures.

Tiger snail in the aquarium?

The tiger snail described in this article is a garden dweller and does not feel particularly comfortable in an aquarium filled with water (regardless of whether it is fresh or salt water). On the contrary, the rural dweller would simply drown there. However, some aquatic predatory snails are also referred to as tiger snails due to their strikingly colored shell. However, the correct name is Clea helena. Sometimes these animals are also available in stores under the names Raubturmdeckelschnecke or Helene.

Can you confuse the tiger snail?

Basically, the “normal” colored tiger snails cannot be confused with other slugs. The differentiation is problematic only with the rare dark monochrome colored individuals, which can sometimes look very similar to the black slug (Arion ater). A distinction is possible through the sole, which is usually light in tiger snails and dark in the case of slugs. At the latest when you place a suspected black tiger snail next to another nudibranch, you can make a precise distinction - sooner or later the tiger snail will nibble on its fellow slugs, but the slug - as a vegetarian - will not.

It can also be confused with the nudibranch, because this type of slug is also light brown to grayish in color and has a characteristic net pattern - sometimes you have to look very carefully.

Does the tiger snail have natural enemies? Although the tiger snail is one of the natural enemies of other nudibranchs, it is not itself safe from predators. Many birds and mammals such as hedgehogs and shrews, but also frogs, toads, blindworms, lizards and snakes enjoy the large and easy-to-catch snails. In addition, insects and parasites such as mushrooms can be dangerous to the eggs.

How can I still fight the Spanish slug?

The best remedy against voracious nudibranchs such as the black slug and the Spanish slug is still a natural garden that is invitingly designed for all kinds of beneficial organisms such as songbirds, blackbirds, crows, magpies as well as hedgehogs, shrews, ground beetles, frogs, toads and slow worms. You can also protect garden beds with particularly endangered plants by taking suitable safety measures. These include a snail fence or mulching the ground with coarse material, such as straw or chopped bark. Even in a raised bed, plants are usually quite safely housed.

Does the tiger snail also eat snails with a shell?

In general, the tiger snail primarily hunts other nudibranchs. Shell snails such as the garden tapestry or even the large Roman snails are usually of no interest - after all, they can quickly retreat to their house and are thus at least safe from predatory relatives (but not from birds, hedgehogs and the like). Only when these animals are dead do they become interesting for the scavenging snail.

Incidentally, the Roman snail likes to eat the eggs of slugs, which is why they are also welcome in the garden. In any case, shell snails do little damage to the beds and plants - in contrast to shell-less slugs.