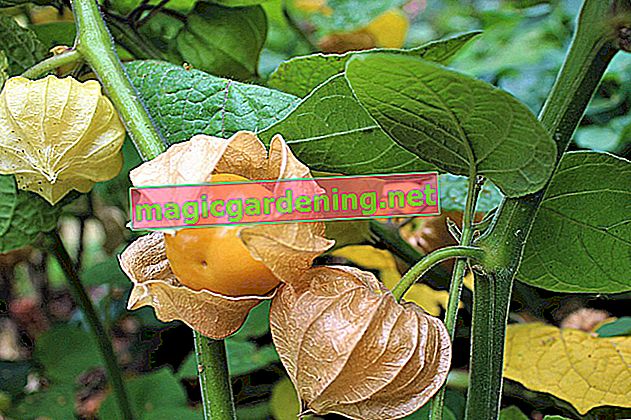 Pull the Andean berries yourself

Usually the plant is grown from seeds, but you don't have to buy them for expensive money. All you have to do is buy a bowl of physalis fruits in the supermarket. You cut these open at home and use a knife to rub the flesh on a piece of kitchen paper. Let it dry there, the seeds can finally be collected after a few days and stored in a bag. Sow the seeds you have obtained yourself from January / at the latest in March in small growing pots and pull out the Physalis on the windowsill.

The Andean berries love the sun

The seedlings that grow from it are separated (ie pricked out) as soon as they have developed two to three other leaves in addition to the two cotyledons. Now put the young plants in a single pot and water them regularly. However, fertilization is not yet necessary. The young physalis plants can finally go outdoors as soon as night frosts are no longer to be expected, i.e. from mid to late May at the earliest. Alternatively, a culture in a pot is also possible. The Andean berry needs a location that is as full of sun as possible, but it should be in a windless corner of the garden or balcony. With regard to the substrate, Physalis are quite undemanding, they thrive on almost any surface. It just shouldn't be too nutritious.

The following points must be observed when caring for outdoors / in the garden:

Grow physalis on the balcony or terrace

If you don't have a garden or want to overwinter your physalis, you can also cultivate the plant in a sufficiently large pot. This should hold at least 10 liters. In contrast to physalis planted in the garden, however, potted plants have to be watered regularly, and fertilizers are occasionally required from around six to eight weeks old. Physalis should not be kept indoors during the growing season because it is too dark for them there - even if the room appears to be flooded with light.

In view of the fact that the physalis needs around four months from germination to the harvest of the first ripe fruits, it makes sense to overwinter the plant and thus accelerate the fruit ripening process. Then you can harvest in July instead of September.