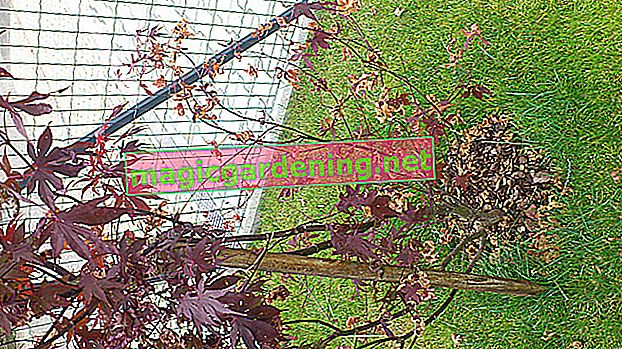 Verticillium wilt is caused by fungi of the genus Verticillium, which mostly live in the soil and also penetrate the plant from there. A possible infestation can be recognized by the following symptoms:

When making a diagnosis, however, it should be noted that some symptoms can also have a different cause. Slack, dry leaves can also indicate a lack of water or, on the contrary, waterlogging. So before you take drastic measures, the first thing to do is to pinpoint the exact cause.

Unfortunately, it is not possible to successfully treat the fungus with a fungicide, and various home remedies are also not helpful. The only way to combat it should be as early as possible and as soon as the first signs appear - however, the infected Japanese maple can only rarely be saved even then.

In particular, make sure not to use any more plants susceptible to Verticillium wilt at the affected location, as the pathogen remains in the soil. The soil should definitely be replaced before replanting.

You can only prevent an infection with the Verticillium fungus by carefully selecting the location, for example by not planting susceptible plant species (such as the Japanese maple) where the pathogen has already appeared. Incidentally, this also applies to a new planting after a soil replacement; even then, trees that are as resistant as possible should be selected.