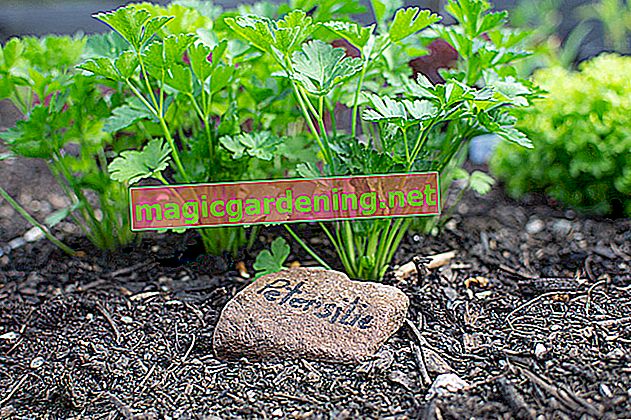 Things to know about sowing parsley

The best time to sow parsley

You can sow parsley in the pot from February to August.

Parsley is sown outdoors from March. The floor temperature must be at least eight degrees.

It is cheaper to put the parsley seeds into the ground from August onwards. Then pests no longer play such a major role and the dreaded parsley disease can largely be avoided.

Since it takes a long time for the herbs to appear, soak the seeds before sowing.

To do this, place it in lukewarm water for several hours. To make it easier to sow the moist seed, mix it with some fine sand.

Mixing in radish seeds has also proven its worth. Since radishes germinate much faster, you can take better care of the growing rows. The radishes have long been harvested when the parsley needs the space.

Choose a partially shaded location with soil that is not too dry and on which no umbellifers have grown three years previously.

Prepare a bed for the herbs by loosening the soil thoroughly, removing weeds and refining it with ripe compost, horn meal or horn shavings (€ 6.39 at Amazon *).

Draw rows six to eight inches apart. The sowing depth should be about 1.5 centimeters, because unlike other aromatic herbs, parsley is not a light germ, but a dark germ.

Sow the seeds in the prepared grooves and cover them with at least an inch of soil.

Keep the surface well moist. It can take up to four weeks for the parsley to germinate.

As soon as the plants have reached a height of five centimeters, you need to prick them out. The ideal planting distance is ten centimeters.

Sow the parsley in the pot

Fill small pots with potting soil. Sow up to ten seeds per pot and cover them with soil. Moisten the surface and place the pots in a warm place.

As soon as the plants have emerged, separate them on one parsley plant per pot. From a size of seven centimeters, you can easily plant outdoors.