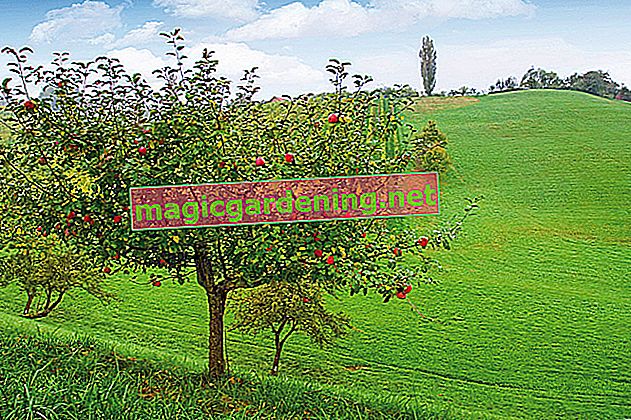 Seeds for growing an apple tree seedling are usually not available in garden centers or by mail order. On the one hand, this is due to the fact that only a few amateur gardeners have the patience to experiment with sowing an apple tree. On the other hand, the kernels of the apple tree can usually be used without any problems as they can be found in the core of an apple.

Outsmart the natural germ barrier of the apple stone

In the year of their ripening on the tree, apple pits are provided with natural germ inhibitors, which only decompose over winter. In nature, this ensures that the kernels only sprout in the new vegetation period and do not freeze off in late autumn. If you want to grow an apple tree from a core yourself, you have to bypass this natural germ barrier in the case of the seeds you have collected. To do this, place the cleaned apple pips between damp layers of kitchen paper in a container to stratify them in the refrigerator for at least two weeks. You can then plant the seeds, which are usually slightly sprouted, in a pot with loose soil.

Keep your eyes open when choosing your core

In principle, the seeds from the cores of apples bought in the supermarket can also be used for cultivation in the garden. Note, however, that many of the apple varieties sold in the store are sometimes not really adapted to the climatic and soil conditions in your region. It may be better to use the kernels from proven apple trees in the gardens of neighbors or relatives for breeding. Well-known and proven apple varieties in Central Europe are for example:

You should be aware that, as a rule, no identical offspring of this tree will grow from the seeds of an apple tree. Since apple trees are self-sterile, half of the kernels also contain the genetic material of an apple tree from the surrounding area.