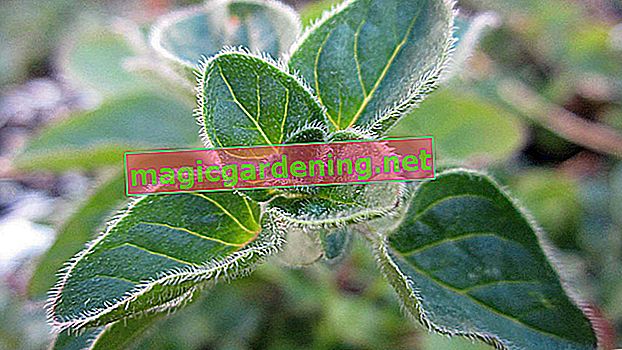 Marjoram and oregano belong to the same genus of plants

Marjoram and oregano both belong to the same genus of plants, the name of which is Dost. The Latin name for all subspecies is Origanum, to which the respective species name is added.

Some hobby gardeners find it difficult to tell the two plants apart. Both give off quite a strong aroma when the leaves are rubbed.

The two plants differ from one another in several ways. This is how you can tell whether you have marjoram or oregano in front of you.

Oregano is also known as “wild marjoram” because the herb is not cultivated, but grows wild everywhere in southern regions. Marjoram, on the other hand, was cultivated for cultivation in northern countries.

Marjoram is primarily used in German cuisine for sausage production. The “Thuringian Bratwurst” is probably the most famous dish for which marjoram is used.

Oregano plays a particularly important role in Mediterranean cuisine and is always included in the “Herbes des Provence” seasoning mix, for example, together with thyme.

Would you rather sow marjoram or oregano?

Since only small amounts of the herbs are required, you only need to grow a few plants. So it is not a problem to plant both varieties in the garden.

Advantages of marjoram are that the herb grows very quickly and can be harvested. If oregano tastes too intense for you, you are better off with marjoram.

Oregano grows a little slower. But the plant is hardy, so you can harvest stems for the kitchen table for two years. If you like to bring Italian or Greek dishes to the table, oregano is essential.

There are not only differences between marjoram and oregano. Except for their winter hardiness, they are similar in cultivation and have been used as medicinal plants since ancient times.

Their healing properties consist of the essential oils that are used for digestive problems such as diarrhea and flatulence. The herbs are also said to be effective for people with poor appetite.

In contrast to marjoram, oregano is also used as a remedy for diseases of the respiratory tract. It can also be used to treat inflammations in the mouth and throat.

For experienced hobby gardeners, the difference between marjoram and oregano is that snails love to visit marjoram, while they avoid oregano.