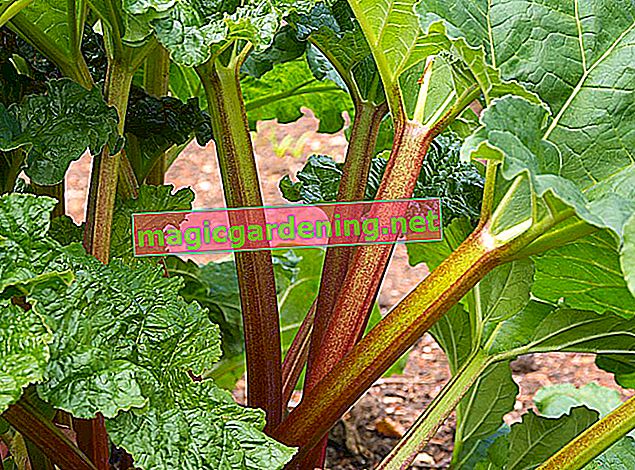 Smooth poles signal the beginning of the harvest

With good care, the time will come from the beginning of April. The tissue between the ribs on the rhubarb stalks will smooth out. At the same time, they take on the appetizing, rich red or fresh green color. This can be the starting signal for this year's harvest.

If the stalk is separated from the plant, cut off the leaf because it is inedible. You should also remove the whitish stalk in the lower area, because an increased content of oxalic acid is to be feared here.

By when can rhubarb be harvested without hesitation?

In agriculture, St. John's Day is important in many ways as a lottery day. At this time, Mother Nature starts up again and animates a second shoot in many plants. This is also the case with rhubarb.

When is a rhubarb plant first harvested?

Even though rhubarb is one of the hardiest, the plant has sufficient potential for a lifespan of seven years. So that this vigor can develop fully, it should not be harvested in the year after planting.

The joy of the first home-grown rhubarb is great. Experienced hobby gardeners ended this season prematurely to ensure a long service life. Such consideration for the vitality of the plant is rewarded with rich harvests in the following years.

So you can harvest earlier and more abundantly

It is tight, the rhubarb season. As soon as it started at the beginning of April, the harvest fun is over by the end of June. Knowledgeable hobby gardeners know how the harvest starts earlier and yields higher yields with the help of the following tricks:

When rhubarb doesn't bloom, the plant saves a lot of energy. She invests this in the formation of new, tasty stalks for a rich harvest.

After harvesting, rhubarb can be stored in the refrigerator longer if you wrap the stalks in wet kitchen towels. Under no circumstances should rhubarb be stored in aluminum cans, because even a minimal amount of oxalic acid reacts chemically with the metal.