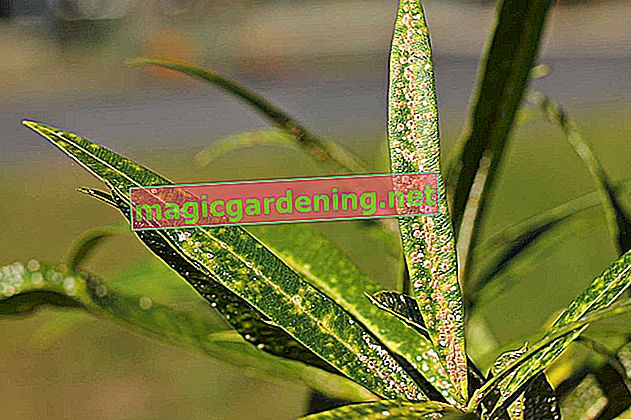 Common diseases and how to treat them

Some diseases - mostly caused by bacteria or fungi - are very common in oleanders. In many cases, you bring the pathogens into your home when you buy a new oleander bush, which is why it makes sense to keep the newcomer isolated at first - this will prevent a wave of infections from spreading to other plants. Such introduced diseases become noticeable very quickly and the sooner you recognize and fight them, the sooner you can get a grip on them. As a preventive measure, you can only ensure that you care for the oleanders as conscientiously as possible and give them a warm and sunny location without drafts. In addition, preventive spraying, for example with fungicides, is possible, which is usually carried out in autumn.However, many oleanders are very sensitive to fungicidal pesticides.

Oleander cancer caused by Pseudomonas bacteria is one of the most common diseases. Basically, almost all oleanders are already infected with the pathogen, although the disease does not always break out. The following features are typical:

Fighting is only possible with strong pruning measures, in which you cut back infected parts of the plant well into the healthy wood. Unfortunately, there are no effective pesticides approved for home gardens. In addition, once the disease has broken out, the disease will most likely keep coming back - the bacteria are stuck in the plant and cannot be removed.

Dry rot is caused by fungi and usually occurs as a result of wintering or after a rainy summer. Here, too, the flowers are initially affected, which dry up and fall off. As the disease progresses, the symptoms also show up on the shoots and migrate from there to the roots. Once the roots are affected, the oleander can usually no longer be saved. In this case, too, control is only possible through radical pruning deep into the healthy wood. Act as soon as possible to prevent the fungus from getting to the base. However, preventive measures with fungicidal sprays are possible so that an infection does not even occur. The appropriate funds are best sprayed in autumn. By the way:To minimize the likelihood of infection, oleanders should never be cut in autumn - the resulting wounds are ideal entry points for fungi and other pathogens.

The gray mold caused by the botrytis fungus only infects the oleander flowers, preferably the varieties with double flowers. The disease occurs primarily in winter quarters, but also in humid and warm summers or when there is high humidity. As a preventive measure, you can inject fungicides or pluck the oleander flowers off before putting them into the winter quarters. Even in rainy summers, it can make sense to remove faded and thus eliminate risk factors. When buying, give preference to self-cleaning oleander varieties, because these are usually much less sensitive to gray mold than others.

Common pests and how to treat them

Particularly during the winter months, there is often an infestation with various sap-sucking pests. Due to the less than ideal conditions during the cold season, oleander is particularly susceptible to spider mites and co. For this reason, it is important to check the plants regularly and to take timely action - the earlier you notice an infestation and take countermeasures, the faster the annoying creatures disappear again .

These persistent pests can only be found on the soft shoots of the oleander, but mainly on the inflorescences and the new shoots. The sticky excretions of the aphids are problematic for you, because these can promote fungal infestation (especially with sooty fungi). Aphids can be hosed off with a sharp jet of water, for example in the shower. The treatment should be repeated several times.

These tiny little animals are very difficult to spot, because as soon as the typical fine webs can be seen with the naked eye, they have already spread strongly. Spider mites can be treated very well with pesticides based on rapeseed oil - also preventively.

These plant lice, which are also very common, can also be combated well with agents based on rapeseed oil; alternatively, regular wiping with a soft soap solution also helps.

When the oleander sheds its buds, a lack of light - for example as a result of a bad weather period - is often the cause.