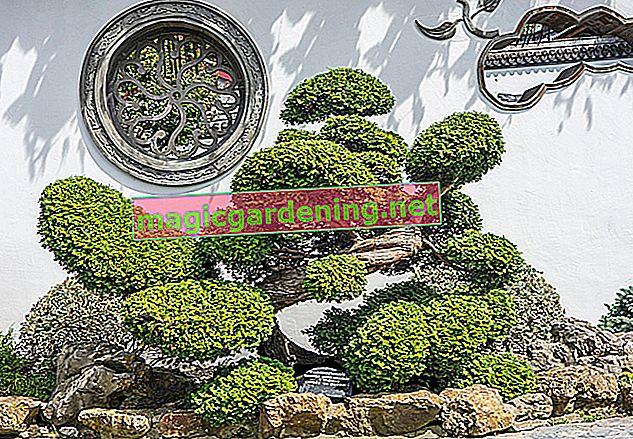 First of all, the right tools and suitable materials are important for the success of the project.

When it comes to tools, you should use these:

The tool should be freshly sharpened and disinfected with alcohol or a disinfectant solution. A refinement attempt often fails due to the lack of hygiene, which results in a fungal infection or the like and thus a failure of the noble rice to grow. The tool must be sharp because any bruising must be avoided - and the copulation cuts should be made in one go and without any re-cutting.

The noble rice is the type of tree from which a new tree is to be grown. Annuals are best suited for this, as strong as a pencil and unbranched. So-called water shooters can also be used, whereby the buds should not be too far apart. The latter often indicates that the shoots grew in a poorly exposed area of ​​the tree. Scallops are always freshly cut during hibernation (preferably in January). Depending on the process, the finishing takes place immediately or at a later date. Until then, you can keep the Reiser cool and damp - for example, wrapped in a damp cloth in the refrigerator. Only buds intended for budding are cut in summer.

The gardener uses this term to describe the root stocks on which the noble varieties are refined and which ultimately determine the growth behavior of the tree. The roots can be weak, medium or strong, depending on whether you want to grow a small or large tree. In addition, thanks to a clever choice of underlay, unsuitable noble types can still be adapted for certain floors - by making the underlay suitable for the location. Wild forms of certain cultivars or self-grown seedlings of any size are often refined as bases.

Most refinement methods are carried out during the dormancy period, which is the appropriate time for so-called travel refinements. Methods such as copulation, grafting or goat's foot grafting are traditionally carried out in January. In spring as well as in summer you can then perform an inoculation or grafting behind the bark. Chip refinements are possible at any time of the year.

There are numerous refinement methods, especially since every experienced gardener can certainly add his own secret tricks. In the following, we will describe the most common methods in brief instructions that are easy to carry out even for beginners. It is advisable to practice the necessary cutting techniques first on thin willow branches or on leftover cuttings.

Copulation is also described as “finishing in the hand” and is one of the simplest processes. To do this, you need a bare-root base and a noble rice of the same thickness. First cut the rootstock about ten centimeters above the root neck and across from a bud. The cut should be about three inches long and sloping. You carry out the same cut with noble rice. Now lay the cut surfaces on top of one another - they must fit exactly and wrap the rice with a tape for stabilization. Then spread the finishing point with tree wax.

The inoculation is also quite uncomplicated and is mainly used in rose and fruit tree cultivation. Incidentally, this is not about crossing two varieties - you only use one variety as a root support and, if necessary, as a master. The actual inoculation takes place between July and August:

Plug behind the bark

If the trunk of the rootstock is significantly thicker than the diameter of the noble rice, you can connect the two parts by plugging behind the bark. A good time for this measure is spring between mid-April and mid-May, although the bark must be easy to loosen.

If the refinement was successful, the noble rice or noble eye will sprout after a few weeks. However, if it dries up, you have to repeat the process.