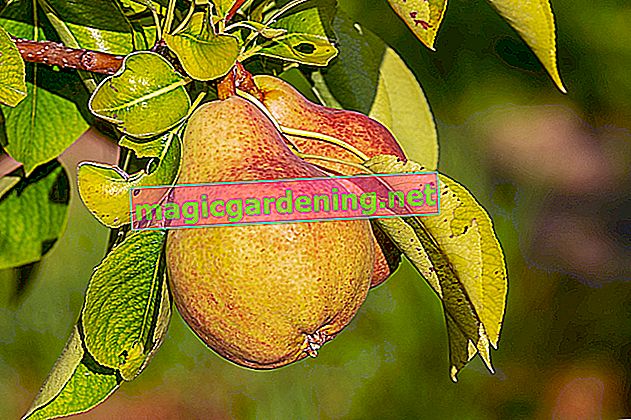 The different ripening times and uses

If you previously thought pear was pear, let us teach you better. Pears come in many varieties. Each has its own needs in terms of location and care.

Some types of pear ripen early, while others don't ripen until late autumn. That is why pear tree species are divided into summer, autumn, late autumn and winter pears.

Early pears taste best fresh from the tree and cannot be stored for long. Cooking pears, on the other hand, are ideal for preserving or for dishes with pears. For the winter supply, late autumn and winter pears are the best varieties. They can be stored for several months.

Table pears are all types of pear that are suitable for raw consumption. These pears are usually quite large and smooth and have a typical pear shape. The aroma can be weak to strong, depending on the base. Table pears are mainly sweet, but there are also sour types.

Cooking pears are, as the name suggests, inedible when raw. They need to be cooked to soften. The aroma only develops properly when it is heated. Cooking pears are ideal if you want to cook compote from the pears or if you want to keep them in preserving jars. There are many cooked pears, especially among the old pear varieties.

Cider pears are often grown on orchards. The fruits are usually quite small and can look a bit wrinkled. Cider pears do not taste good raw. They are preferably used for making perry must. Cider pears are also kept on large areas for wine production. Cultivation is only worthwhile on a large scale. Cider pears are rarely planted in the home garden.

The first summer pears are ripe as early as July. Most summer pear varieties are harvested in August and September. They have to be used up immediately because storage doesn't get them. They are also not suitable for boiling down.

The most famous summer pears include:

You can harvest early autumn pears between September and October. They are usually not as sweet as summer pears. On the other hand, the taste is often very aromatic. These pear varieties can be stored a little better than summer pears.

Depending on the weather, they ripen between October and December. In unfavorable locations, however, the fruits are not always ripe. Autumn pears should therefore only be planted in very protected areas, preferably in front of house walls.

Winter pears are not ripe until December. Often it even takes until January before they can be harvested. Winter pears are therefore not suitable for unfavorable locations with early frosts. They do not ripen in time and freeze to death on the tree. An exception is the pastor's pear, which can be harvested from September to January under favorable conditions.

New pear varieties come onto the market almost every year. It is worth asking at the nursery. Often new breeds are resistant to powdery mildew and robust against pests.

Unfortunately, old pear tree varieties are increasingly being forgotten. An exception is Clapp's darling, a variety that is still commonly found in gardens today.

Some hobby gardeners have dedicated themselves to preserving the ancient species. By grafting and propagating, they ensure that the old pear varieties do not completely disappear from the gardens.

If you are interested in old pear tree varieties, it is worth visiting alternative tree nurseries or the allotment garden colony in town. Old varieties are still often grown there. Most hobby gardeners are more than happy to cut vines from their old pear trees and help you to propagate almost forgotten pear varieties.

Plant several varieties of pears in the garden. Since pear trees are not self-pollinating, they need another tree to pollinate. If you grow pears with different harvest times, you can always pick fresh pears from summer to autumn.