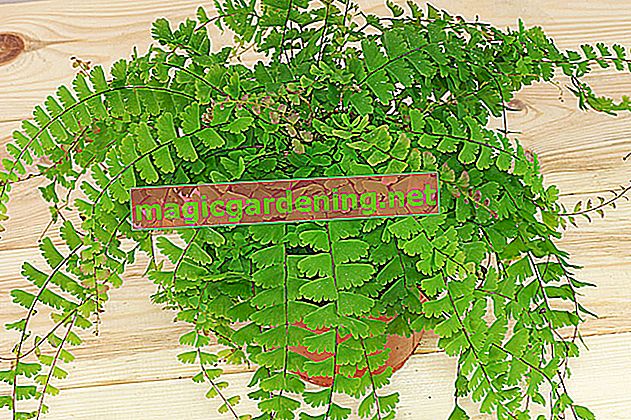 Maidenhair ferns are a species-rich genus within the world's border fern family. The species Adiantum capillus-veneris is the only species found in Europe. It thrives on wet limestone cliffs and settles on steep slopes in partially shaded locations. The fern is found on river banks and streams. This common maidenhair fern is also offered as Venus hair.

The triangular lady's hair fern (Adiantum raddianum) is one of the popular ornamental plants along with Venus hair. This plant originally comes from the tropical rainforests of Central and South America. Here they grow under warm and humid conditions in the undergrowth of broad-crowned trees.

Adiantum species grow as perennial herbaceous plants with underground rhizomes. The tuber can be short or elongated, depending on the species. The rhizomes, which are covered with yellowish to red-brown scales, partially branch out. The ferns grow upright and bushy and reach heights of between 30 and 100 centimeters.

The leaves are reminiscent of fronds that are arranged alternately. The position of the leaves is hardly noticeable because the leaves are densely clustered. Their leaf blades are pinnate several times and can be between 15 and 110 centimeters long. The shape of the leaf is reminiscent of the shape of a fan. Each leaflet has a wiry stalk, which gives the plant its German name. The stalks appear black-brown with a dark purple tint.

As ferns, Adiantum species do not develop flowers. They multiply using spores that are formed below the fertile leaf sections. These are bent down at the edge. The spores are yellow or brownish in color. They spread with the wind.

The ornamental foliage plants are grown in pots, as most varieties do not survive the winter outdoors. The potted plants beautify dark corners of the garden in summer. They are suitable for decorating the banks of water and decorate semi-shaded stone niches and walls. Maidenhair ferns The plants can be grown upright or placed in hanging pots. If you want to establish the maidenhair fern in the garden, you should use hardy varieties.

Little is known about the poisonous effects of maidenhair ferns. They are classified as slightly toxic. Nausea and vomiting may occur after consumption. The toxic effect can be more intense in pets.

Maidenhair ferns prefer a partially shaded location. They also thrive in shady spots. High humidity is crucial for strong growth. Temperatures between 20 and 25 degrees Celsius ensure optimal conditions. In winter the plants feel comfortable at 18 to 20 degrees Celsius. As moisture-loving container plants, they are ideal for greening bathrooms. The plants don't like drafts.

Maidenhair fern can be planted in conventional potting soil. Soil for orchids is also suitable for the cultivation of ornamental plants. They like a nutrient-poor, low-salt substrate. The pH value should be in the acidic range.

The ideal mix consists of:

Frost-sensitive varieties should be planted out in the garden after the ice saints, when the night temperatures no longer drop well below ten degrees Celsius. Winter hardy varieties can be planted between spring and late summer. The ideal planting time is between late March and late April. The plants then have sufficient time to develop roots.

Place the ferns so close together that the distance between two plants is half the circumference of the root ball. The ferns feel good when the planting hole is twice as deep as the root ball. Put pottery shards, quartz sand (€ 14.90 at Amazon *) and pebbles in the hole so that the water drains off better. Use substrate that is free from weeds and root debris for backfilling. You can improve the excavation with compost, peat or foliage soil.

The plants can easily be multiplied by dividing them. It is possible during the growing season. The spores are also suitable for reproduction.

To do this, you need to dig up the rhizomes growing flat under the surface of the earth and completely free them from the substrate. Use a sharp knife to divide it. Each section should have at least three fern fronds for the plant to grow well. Plant the pieces together individually or in small groups.

Cut off a fertile frond. They recognize mature spores when brown dust sticks to the finger when they are wiped off. Place the fern frond on tissue paper so that the bottom is on the sheet. Put a container over the leaf so that the fine spores are not blown away. They settle on the paper and can then be scattered on potting soil. Cover the spores thinly with sand. Keep the substrate moist continuously

Maidenhair fern in the pot

Since maidenhair ferns prefer moist conditions, you should use a pot made of terracotta, clay, or stone. These materials regulate the moisture balance in the substrate as they absorb water and release it when it is dry. The rhizomes rot easily when moisture builds up in the substrate. The bucket should therefore have a drainage hole and be lined with a layer of pebbles or potsherds.

The maidenhair fern feels at home on the balcony when protected conditions are guaranteed. A south-facing balcony is ideal. Place the bucket against the wall of the house so that the plant does not get drafts and benefits from the warm temperatures. Protect the fern from the direct midday sun.

Here optimal conditions are suitable for healthy growth. Maidenhair ferns are protected from the direct sun behind frosted glass. The interior heats up so that moisture evaporates from the substrate. It increases the humidity, which is beneficial to the ornamental plants.

Adiantum species have a medium water requirement. Young ferns should be watered sparingly as their small leaf fronds require less water than the leaves of fully grown specimens. Let the soil dry on the surface before each watering. The root ball must not dry out, as the fern quickly loses leaves. Too intensive irrigation units lead to root rot. The humidity in the room is increased if you place the pot in a planter filled with gravel and water.

The nutritional requirement is low. Use fertilizer sparingly because the plants can easily be overfertilized. If you grow the plants in a peat-based soil mix, they will enjoy a supply of nutrients every four to six weeks during the growing season. If you use a mixture of compost, foliage soil or normal potting soil, fertilizing every eight to ten weeks is sufficient. Use liquid fertilizers in low concentrations.

Regular trimming is not necessary with maidenhair fern. You can cut off dried up fern fronds during the year to stimulate the plant to sprout again. After winter, a thinning is recommended, in which dried shoots are removed.

As soon as the first roots emerge from the substrate, the maidenhair fern should be repotted. With this measure, shorten roots by a third. As a result, the rhizome develops new fine roots and remains compact. The new pot should be twice as deep as the root ball. When you have repotted the plant, you can cover the soil with gravel. The stones act as evaporation protection, so that the moisture stays in the root area longer.

Aphids and spider mites are common in indoor cultivation. A pest infestation is favored by low humidity. Regularly check the moisture in the substrate. You can fight the pests directly with oily preparations. The oil film lies on the leaves and traps the insects so that they can no longer breathe and die. You should refrain from using soap-based solutions, as the ferns are sensitive to them. Pesticides do not tolerate maidenhair ferns.

Glassy spots on the leaves indicate an attack by small leaves. They reach the plant via the irrigation water. The nematodes enter the organism through the stomata of the leaves, where they suck out the cells. In the initial stage, it is enough to cut off the infected leaves and dispose of them. Once the pests have spread to the entire plant, you should remove them. This will prevent the roundworms from spreading to neighboring plants.

If the fern fronds turn brown, this indicates a suboptimal location. The maidenhair fern prefers light locations. It tolerates hours of sunshine in the morning or evening. If the plant is exposed to the blazing midday sun, the leaves burn quickly and turn brown. Put potted plants outdoors in a sheltered spot under trees. Make sure that the plant receives the same amount of light from all sides. This ensures uniform growth.

Maidenhair ferns harmonize with other fern plants such as worm fern, moon crescent fern or palm leaf fern. They can also be planted in a tub with larger forest grasses such as the Japanese sedge.