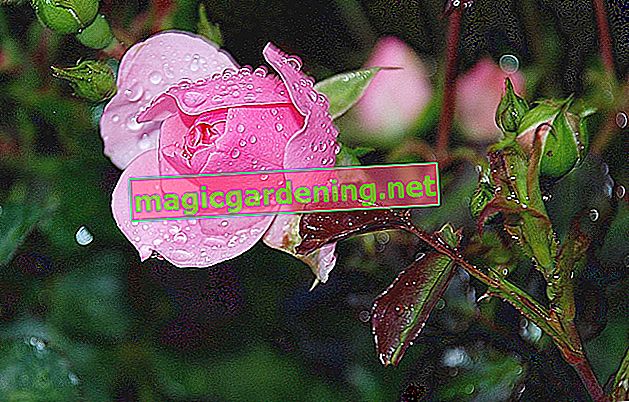 Only fertilize roses in spring

Typically, roses are planted in late autumn between October and early December. At this point they are in dormancy, which is why fertilization (for example with compost) is basically pointless - the roots would not absorb the nutrients anyway. For the first time, fertilization takes place in the spring after planting, ideally between the end of March and the beginning of April. Now the roots take up the nutrients and pass them on as desired.

Roses are fertilized twice a year with organic or organic-mineral fertilizers, once at the beginning of the growing season around the beginning of April and a second time immediately after flowering, but not later than the beginning of July. After the July fertilization, roses should no longer be cared for, otherwise the shoots will not be able to ripen in time for winter and thus threaten to freeze at low temperatures. In addition, use only organic fertilizers or mixtures of organic and mineral fertilizers if possible. Purely mineral fertilizers (such as blue corn) contain too much nitrogen and are therefore unsuitable for roses. Special rose fertilizers (€ 11.41 at Amazon *), on the other hand, contain exactly the right mix of nutrients.

While mineral fertilizers release their nutrients to the plant immediately (and therefore there is a faster risk of overfertilization), organic fertilizers such as compost or cattle manure (€ 17.80 at Amazon *) only gradually release their nutrients to the plant in the course of the rotting process. Therefore, the risk of over-fertilization is significantly lower, but the nutrients in the rose are not immediately available.

Many a nutrient-poor soil is not inherently poor in nutrients, but simply depleted. A soil analysis can be used to determine whether this is also the case with your garden soil. In most cases, however, gardeners in Germany have the opposite problem, because many soils are simply too “fat” because they have been fed with too much and uncontrolled nutrients over the years. However, you can improve a soil that is actually poor in nutrients according to the instructions in the soil sample.

In addition to the basic fertilization, you can provide your roses with liquid fertilizer throughout the entire vegetation period, albeit in a low concentration - this is intended to prevent over-fertilization. This type of supply is particularly relevant for roses grown in pots and when the basic fertilization is coming to an end too quickly. For example, it can be quickly washed out by frequent watering (in high heat) or frequent rain. When it comes to the supply of liquid fertilizers, you should mainly rely on organic means.

In addition to the supply of nutrients, a final fertilization with patent potash is recommended, which should be carried out in August. This supports the new shoots in their maturity and thus ensures that the rose is hardened and made winterproof. Apply this fertilization by the end of August at the latest, because a later fertilization no longer has any positive effects on the shoot maturity.

If the leaves of the roses turn yellow, this may be due to chlorosis, i.e. an iron deficiency. You can recognize this deficiency disease by the pale leaves, on which the leaf veins stand out. Iron deficiency mainly occurs when the soil pH is above 7.5 and is primarily treated by moving the soil more in the acidic direction again. This is done by adding peat or adding an acidic fertilizer. You can bring back the fresh green foliage color at short notice with the help of a special iron fertilizer.

Regular fertilization is particularly important with tub roses, as the plant cannot supply itself with nutrients from the soil. In addition, the nutrient supply in a spatially limited planter is usually very quickly exhausted. Roses in the tub are given a slow release fertilizer at the beginning of the growing season, which continuously supplies the plant with nutrients for several months. In addition, there is a supplementary fertilization with a low-dose, liquid fertilizer. In contrast to the planted specimens, tub roses should be fertilized until September, as otherwise they may suffer from a nutrient deficiency.

Make sure to water your rose bush vigorously after each fertilization. In this way, the nutrients go straight to where they belong: namely to the roots.