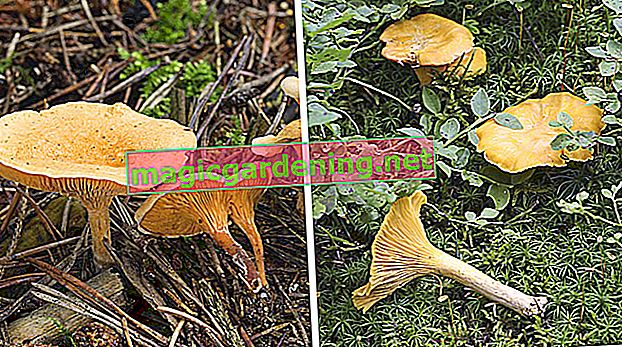 The chanterelle occurs in both coniferous and deciduous forests. However, it grows particularly often in sparse forests with old trees and a lot of dead wood. You can usually find it in the mossy subsoil in warm places, although this mushroom also loves moisture. That is why it is mainly found in regions that naturally get a lot of rain. Conveniently, chanterelles often grow in groups.

The hats of young chanterelles are typically curled down, while the older ones are wavy and funnel-shaped. Real chanterelles are pale to strong egg yolk in color (which is why they are popularly known as “chanterelles”), but never orange!

The real chanterelle has no lamellas, but ridges. These run down the stick and are often connected in a network. The last and the stem are the same color as the hat. This is short and often curved. The stem is not hollow inside.

The white to pale yellow flesh is firm but quite brittle and the stem can be fibrous to tough.

The real chanterelle grows in mossy deciduous and coniferous forests between June and November. He always appears in groups.

How to recognize the false chanterelle (Hygrophoropsis aurantiaca)

In addition, the false chanterelle can only be found from September to October. It mainly grows on the ground or on very rotten softwood. It is not toxic, but it can cause diarrhea in sensitive people.

You also have to be careful with the similar luminous olive tree mushroom, which is poisonous but only occurs south of the Alps.