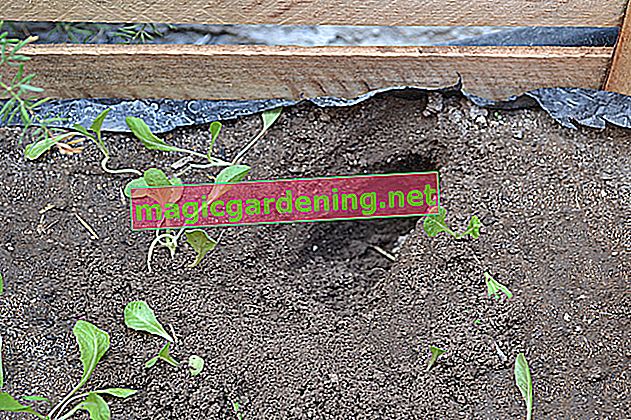 Birds and hedgehogs leave holes about 2 cm deep that they dug in search of food. The food is pests in the ground, which is why these holes can be welcomed with joy. Only if they accumulate in such a way and make a lawn unsightly, for example, should something be done about it.

A particularly large number of small holes with a diameter of a few centimeters indicate earthworms. Small earth globules around the hole are another indication that points to these animals. The holes are not really to be regarded as damage, the worms in the ground are much more a sign of a healthy soil layer.

In the garden we usually have two types of mouse: shrews and voles. The shrew is an insect eater, so there is no risk of plant damage. The approximately two centimeters wide holes are entrances to their tunnel system.

The vole digs underground passages, which of course have openings as entrances. In addition, small mounds of earth are scattered here and there in which plant remains can be stuck. The vole is a major pest in the garden.

The clearest indication that a mole is raging in the garden is provided by its mounds of earth and less by the holes it has dug. They can be piled up to 25 high and 30 cm wide. Moles are not harmful and are protected. It is purely visual aspects that cause a garden owner to drive the animal off his property.

Rats are believed to have dug holes 8 to 12 cm in diameter that protrude directly into the ground. Sprinkle white baby powder around the hole. You will soon be able to tell from traces whether the building is still inhabited. A rat infestation must be reported to the competent authority.