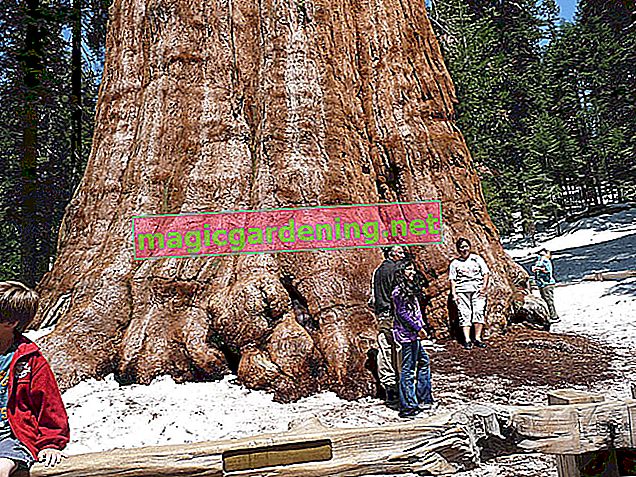 How big is the largest tree in the world?

"Trees are more sensible than people, they always strive for the light."

The term “large” can be interpreted in different ways. “Tall” in relation to trees can mean their height, but also their sheer mass or width. Therefore, different specimens are shortlisted for the title “largest tree in the world”.

A coastal redwood tree (bot. Sequoia sempervirens) called “Hyperion” is currently considered to be the tallest living tree in the world. Its current height is 115.72 centimeters. As unbelievable as it sounds, this impressive giant was only discovered in 2006 because it is located in a rather remote part of the Redwood National Park on California's Pacific coast. Incidentally, there are other record-breaking trees of the same species in the immediate vicinity:

Incidentally, an Australian giant eucalyptus (Eucalyptus regnans), discovered in the 19th century, is said to have been even higher, with an unbelievable height of 132.58 meters. Unfortunately, this record was only established after the tree was felled.

The mightiest tree in the world

The mightiest tree in the world is also a sequoia tree, albeit one of the mountain or giant sequoia type (Sequoiadendron giganteum). This tree, known as the “General Sherman Tree”, is probably the most voluminous tree in the world at around 1,490 cubic meters. It can be viewed in the Giant Forest of Sequoia National Park in California. Incidentally, the “General Sherman Tree” is not only particularly large, but also very old: Its age is estimated to be around 1900 to 2500 years. However, this does not make it one of the oldest trees in the world.

Thickest tree in the world

A Mexican bald cypress (Taxodium mucronatum) called “Árbol del Tule” currently bears this honorary title, with an impressive trunk circumference of 46 meters. Although this specimen, located in Santa María del Tule, Mexico (state of Oaxaca), is not unusually tall at around 42 meters, it is extremely heavy with an estimated weight of 636 tons.

This video also provides an entertaining overview of the five most incredible trees in the world:

How big is the largest tree in Germany?

But also in Germany there are interesting record holders to admire under the trees. Germany's currently tallest tree is a Douglas fir known as the “Waldtraut vom Mühlenwald” (Pseudotsuga menziesii), which according to measurements in 2017 is exactly 66.58 meters high. In the meantime, however, the very fast-growing wood should have added a few more centimeters, because the tree was only planted in 1913 and is still growing. On average, Douglas firs grow about 30 centimeters per year if the growing conditions are right. So you can still be curious. By the way, “Waltraud” can be visited near Freiburg, in the so-called Mühlenwald.

The thickest tree in Germany, however, is in the north, in the small Emsland community of Heede. The “thousand-year-old linden tree” is a summer linden tree with a trunk circumference of 18 meters - there is no larger linden tree in all of Europe. A total of 12 adults are required to encompass this tree. The crown of this tree is very impressive with a diameter of about 30 meters. It is supported by several branches that branch off from the main trunk at a height of about three meters. Many old and extensive trees have split and hollow trunks, but not this linden tree: atypically, its thick trunk is still comparatively firm and has only a few cavities.

What is the maximum height of trees?

As impressive as the giant trees presented here are: no growth lasts forever. Tree scientists - so-called dendrologists - have calculated the maximum growth height of a tree before its supply system collapses and the tree dies because it can no longer take care of itself: the scientists' estimates in this regard range from a maximum height of between 130 and 150 meters. Of course, this information does not apply to every tree species and not to every location, because only certain trees can reach such gigantic proportions - and only if they find sufficient water and nutrients, are in a quiet location with sufficient light and, last but not least, don't be cut down prematurely by people.

These tree species are particularly tall

These tree species are considered to be particularly tall: In addition to these species, which all make up the largest tree specimens, there are a few other tall trees, which in individual cases also reach impressive dimensions. These include, for example:

The following table shows the stature heights that the tree species that are often found in our mixed forests reach - provided that they are allowed to grow and that they are not sawn by forest workers beforehand. It shows that Central European trees can grow to an average of around 30 meters. What catches the eye, however, are the different types of fir, which, with good growing conditions, can reach 50 meters or, as in the case of the Nordmann fir, even up to 70 meters.

That's how tall our fruit trees get

In comparison, fruit trees neither reach a particularly old age nor are they particularly large. The outliers here are sweet cherry and walnut trees, which, with their heights of well over 20 meters, require a lot of space in the garden and, at around 60 to 80 years, also get older than most apple trees.

Why do some trees get so extremely tall? For these giant trees to be able to reach their impressive height, of course, a number of factors have to come together. In addition to genetics - the maximum height of growth is genetically determined in many species - environmental factors play a major role. Only where optimal growth conditions prevail, the trees become so large. Without the appropriate resources, however, they will remain significantly smaller - after all, sequoias that we have planted do not even come close to that high. For this reason, there are often several tall specimens next to each other, because the site conditions allowed different trees to grow extremely well.

In addition to these factors, other causes also play a major role: Resilience is one of them. The largest living beings on earth, the sequoias, for example, have bark up to 70 centimeters thick - which is also fireproof, as it secretes a protective liquid over the outer skin when it is hot and is extremely capable of regeneration. The high tannic acid content also keeps insects and fungal pathogens away, so that Sequoia is practically immune to all kinds of pests and diseases.

Can you visit the tallest tree in the world?

The location of the tallest tree in the world - “Hyperion” is kept secret to protect it from overly intrusive tourists. As unbelievable as it sounds, this tree has shallow roots, which is why trampling feet could cause considerable damage to its roots. In addition, the specimen is in a secluded spot that is neither paved nor signposted.

Are the tallest trees also the oldest?

No, because the height has nothing to do with age, but with the speed of growth. However, sequoias can also reach an extremely old age of several thousand years.

And which is the smallest tree in the world?

The so-called herb willow (Salix herbacea) is considered the smallest tree in the world. Although it is only about ten centimeters high, it has everything that defines a tree: a trunk, a crown, green foliage as well as flowers and fruits.

The primeval sequoia (Metasequoia glyptostroboides) from China is related to the two American species, but only reaches heights of between 30 and 35 meters.