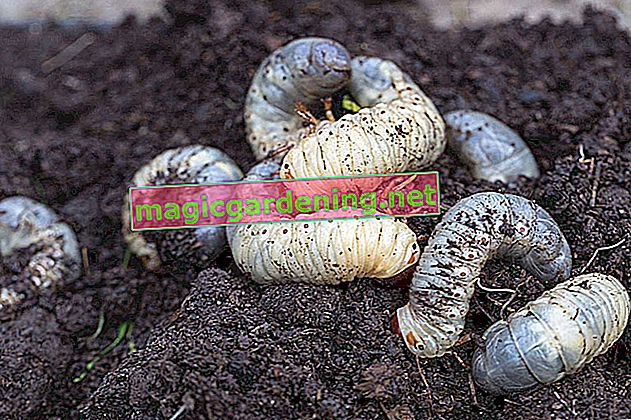 The larvae of certain species of beetle, those of the genus Scarabaeoidea, are called grubs. The following species are most likely to be found in our gardens:

What all these beetles have in common is that they lay their eggs in the ground, where the hatching larvae then feed on the roots of living plants. They target grasses in particular, which is why an infestation typically manifests itself in dying, easily detachable islands in the garden lawn. But they do not stop at many bedding plants either, strawberry, beet or lettuce roots, for example, taste good to them.

You can recognize harmful grubs by the following characteristics:

Due to the significantly reduced occurrence of May and June beetles and the small size of garden leaf beetles (and their grubs) the damage is actually not dramatic. However, to avoid unsightly spots in the lawn and individual crop failures, you can do the following:

Digging up the affected areas and picking up the guys manually is a very straightforward method.

White grubs can also be contained quite reliably with the help of predatory nematodes, which parasitize and kill the grubs.

A white grub trap is a bucket filled with horse manure that you dig into the ground and leave there for a year. The grubs crawl in there and can then be removed along with the bucket.

As a preventive measure, it is also worth putting insect protection nets over the ground during the beetle flight times to prevent them from laying eggs.