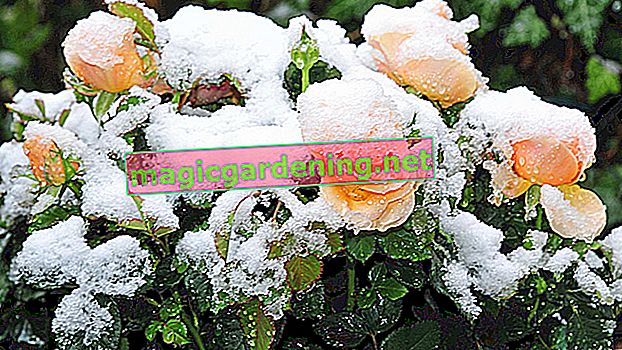 Geraniums grow wild in the dry and warm climate of Southeast Africa - the cultivated ornamental geraniums in our native regions also need a similar climate. At temperatures below 10 ° C, the plants react with a growth stoppage and die in light frost. The location should also be as sunny as possible and protected from rain, because geraniums react to excessive moisture and a lack of light with blooming rot and various diseases.

There are no hardy “geraniums”

Sometimes “hardy” geraniums are offered in various shops. As a rule, however, it is not the type of pelargonium - which is botanically correct in German actually called pelargonium - but rather the cranesbills (lat. Geranium) native to us. These are related to the pelargoniums, but in contrast to the flowers from Africa, they are actually less sensitive to frost and hardy. If, on the other hand, “hardy” pelargoniums are offered, they also only tolerate very low freezing temperatures for a very short time.

The right date for planting out

Due to their sensitivity to frost, geraniums should therefore only be taken outside when no cold spells or even frost is expected - night frosts in particular are dangerous. The flowers can withstand temperatures of up to five degrees Celsius for a short time; at lower temperatures you should bring the plants indoors. According to an old farmer's rule, geraniums and other summer flowers belong outside after the ice saints in mid-May at the earliest, but better from the end of May.

Bring geraniums to the winter quarters in good time

What applies to spring is of course also relevant in autumn: geraniums should be relocated to winter quarters before the first frost - this time is usually mid-October, but no later than the end of October. The plants should, if severely pruned, overwinter in a cool and frost-free place at temperatures between five and ten degrees Celsius. If you have removed all the leaves, geraniums can also be stored in the dark cellar over the winter.

If even cooler nights are ahead in May, but you no longer want to bring the geraniums into the house, then it is best to place the window boxes (€ 106.25 on Amazon *) or tubs directly on the house wall and cover the plants with an insulating fleece. If necessary, a thick layer of newspaper can keep out some of the cold.