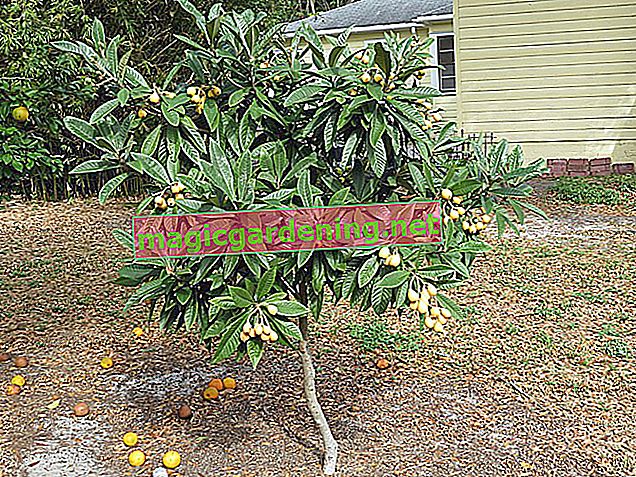 On the Internet you can read more often that Japanese loquats are hardy down to minus 15 ° C (and sometimes even more) and can therefore easily be overwintered outdoors. However, the horticultural experience teaches us the opposite, because these trees, which grow up to about 12 meters high in their home country, are actually quite robust, but they are not frost-hardy or even snow-tolerant at all. The bushes and trees usually survive mild winters outside without any problems, but as soon as the temperatures drop sharply - to less than five to eight ° C - there is a risk of frost damage and even death of the tree through freezing.

Plant out the Japanese loquat or not?

For this reason, you should refrain from planting the tree in the garden, because German winters are known to be unpredictable. What may go well for a few years thanks to mild winters - the loquat grows and thrives outdoors all year round - can be undone by a single harsh winter. If you still want to plant the plant out, it is therefore best to place it in a protected location near a house wall that radiates heat. In addition, the tree should always be wrapped up warm when it is threatened with sub-zero temperatures, with the roots and trunk in particular having to be protected from the cold.

Japanese loquat overwinter in a pot

However, it is better to leave the loquat in the pot and bring it into the house or greenhouse from November. Here the tree winters in a light and frost-free, but cool location at around five to a maximum of ten degrees Celsius. Water the plant regularly so it doesn't dry out, but stop any fertilization. Larger specimens can sometimes hibernate in a nursery for a fee - just ask a gardener you trust.

The Japanese loquat can, of course, also spend the winter on the balcony when it is warmly packed, provided that the temperature does not drop too much. You should wrap both the planter and the plant in fleece or the like, although an exchange of air must be possible - otherwise the tree will moldy under its winter cover.