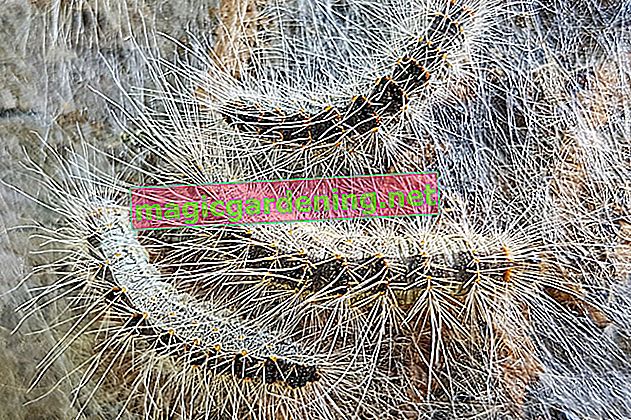 What is the oak processionary moth?

The oak processionary moth is a nocturnal butterfly that flies between late July and early September in warm and dry years. The inconspicuous gray-brown colored butterfly has a wingspan between 25 and 35 centimeters, whereby the females are slightly larger than the males. A single female lays up to 150 white eggs, about one millimeter in size, from which the poisonous caterpillars hatch from the beginning of May. These go through about five to six stages of development until they pupate in late June to early July. The caterpillars are often found en masse on tree trunks and branches, where they stay in webs during the day. At dusk, the animals wander into the treetops to eat their fill of leaves and delicate shoots.

The oak processionary moth originally comes from southern Europe, where it causes great damage, especially on the Iberian Peninsula. For some years now, however, the moth has been spreading in other European countries to the north-west and even to Finland and southern Sweden. In Germany, all federal states are now affected, but above all Berlin and Brandenburg, Saxony-Anhalt as well as North Rhine-Westphalia, Baden-Württemberg and Bavaria - i.e. everywhere where oak-rich forests and avenues lined with oaks are in rather flat regions.

Why is the oak processionary moth so dangerous?

The following video shows very impressively why one should not take an infestation with the oak processionary moth lightly and also how difficult it actually is to sustainably control the poisonous caterpillars:

Every single caterpillar of the oak processionary moth has up to half a million poisonous stinging hairs, which break very easily and are often spread over long distances with the wind. For this reason, the animals are dangerous not only when they come into direct contact, but also when you get close to them. The hairs contain the toxin thaumetopein, which is a nettle poison.

Who is particularly at risk?

The following list clearly shows which people and which areas of public life are particularly affected by the oak processionary moth.

The poisonous caterpillar hairs cause typical allergic reactions like these:

These symptoms are collectively known as caterpillar dermatitis and are very uncomfortable. In severe cases, a so-called allergic shock can occur, which is an acute danger to life and the emergency service must be called immediately. Inhaling the hairs can also cause irritation to the mucous membranes in the mouth and nose, which can ultimately even cause bronchitis or asthma. Furthermore, affected people often feel tired and complain of circulatory problems. Sometimes a fever occurs.

What can you do about caterpillar dermatitis?

In the case of caterpillar dermatitis, please contact your family doctor or an allergist immediately or, outside of the usual local office hours, the emergency service. They will prescribe appropriate cortisol supplements and antihistamines to help relieve symptoms. These are mostly tablets that have to be taken for several days in a row. If the symptoms are severe, the doctor can also inject the active ingredients directly and thus achieve a faster effect.

This is how you can protect yourself

However, there are a number of things you can do to avoid suffering from the symptoms mentioned above. The following measures will help prevent the worst after contact with the oak processionary moth:

If you already suffer from itching, this can be relieved by rinsing the affected areas with clear, cold water.

Endangerment for the forest The hairy caterpillars of the oak processionary moth are not only dangerous for humans and animals, but also for the forest. If the animals appear en masse and on larger areas, as has happened more and more often since the 1990s, they eat the infected trees almost bare. These need a lot of strength for the subsequent regeneration, whereby in the case of several years of consecutive defoliation, the vitality of the trees decreases considerably and they become more susceptible to further pest infestation and diseases. As a result, the affected trees stop growing, no longer form acorns and eventually die.

When does the oak processionary moth appear particularly frequently?

The caterpillars of the oak processionary moth hatch from the beginning of May, although at this point they are not yet poisonous. The fine, poisonous stinging hairs do not develop until the third larval stage. On the other hand, they remain dangerous for a particularly long time, because the larval skins together with the hair remain in the nests after each molt and after pupation - and can continue to cause problems here for up to a year. For this reason, not only the caterpillars themselves, but also abandoned web nests are a source of danger.

Have you found a caterpillar nest? You have to do this now!

Never touch a caterpillar nest or the caterpillars and keep your distance as possible! Control should only be carried out by appropriately equipped specialists.

The oak processionary moth is particularly prevalent in some regions of Germany, so that the authorities there are taking drastic measures to contain it. This also includes the widespread application of insecticides to stop the spread of the butterfly in the forests. In the following sections we explain what you can do after finding a web or caterpillars.

Is there a statutory reporting requirement?

First of all: If you have found caterpillars of the oak processionary moth, you do not necessarily have to report them to the authorities. There is currently no legal obligation to report this in Germany (as of September 2019). However, a report to the responsible authorities is still useful in order to secure infested locations and to be able to counteract a massive infestation. This applies above all to public places and places such as urban forests, parks, kindergartens and schools, playgrounds, etc. By reporting the nests, you ensure that the authorities can act and no one is harmed. Where can I report found caterpillar nests?

If you have discovered caterpillars of the oak processionary moth, you can report them informally - for example by calling or emailing them - to one of the following offices responsible for you:

In case of doubt, you can find out from the named authorities who you should actually submit your report to. Describe exactly when and where you found the caterpillars. Perhaps you can also send a photo as an email attachment to show the location and the pressure of the infestation. The authorities of some cities and districts have also published the names and telephone numbers of the responsible employees on their websites.

What do you have to do if the caterpillar nest is on your own property?

If there is such a web of nests on your own property, do not touch it under any circumstances. Do not try to destroy it yourself, for example by flaming it - the fine stinging hairs will be whirled up all the more. Instead, notify specialized pest controllers, who will then come with protective suits and suitable equipment and eliminate the plague. The caterpillars and their nests then have to be disposed of separately, which is usually done by burning them in a hazardous waste dump. Under no circumstances should the webs end up in the household waste or on the compost!

Who pays for the removal of the caterpillar nest?

If the caterpillar nest is on your own property, you will have to pay for the costs of removing it yourself. In some federal states - for example Berlin - the authorities can order such a removal above your head and have it carried out. However, if the nest is on public land, you can report it, but you do not have to pay anything afterwards. Is the oak processionary moth dangerous for dogs?

Of course, not only people, but also dogs, cats, horses and other domestic and farm animals are endangered by the oak processionary moth. Make absolutely sure that your animals do not come into contact with the poisonous caterpillars.

As the name suggests, the oak processionary moth attacks mainly oaks. All oak species are affected. The caterpillars can also be found on other tree species, particularly in the heavily infested years, with hornbeams being particularly affected. The animals can mainly be found on individual trees and on the edges of forests.

Are web moths and oak processionary moths the same thing?

The web moths are also butterflies whose offspring eat whole trees bare. In contrast to the caterpillars of the oak processionary moth, however, these are not poisonous, especially since they are different species.

In early summer, look out for signs that say “Warning, caterpillars” or others. These mark areas contaminated with the caterpillars of the oak processionary moth, which should not be entered if possible.