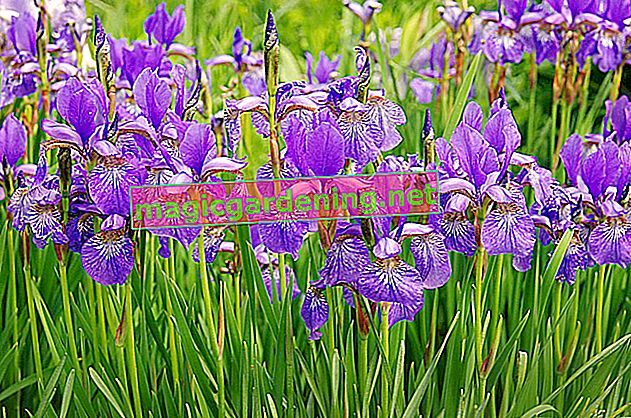 Irises are only native to the northern hemisphere and almost exclusively in the temperate climatic zones - but the magnificently blooming summer flowers are found in an unmanageable variety on almost every northern continent. Incidentally, the generic name “Iris” refers to the eponymous Greek goddess of the rainbow, because irises are also available in an incredible variety of colors. The spectrum of different flower and growth forms is just as inexhaustible, as there are many different variants from the low growing dwarf forms to the tall growing bearded iris. So it's no wonder that the Association of German Perennial Gardeners named the popular plant “Perennial of the Year” in 2016.

The uses for irises depend largely on the species and variety chosen. Varieties for damp surfaces feel at home on the edge of a garden pond or a stream, while iris species adapted to dry and sunny locations fit wonderfully into the shrub bed or the rock garden. You can also cultivate the magnificent perennials in pots, as long as there is an adequate supply of water and nutrients. In particular, the dwarf forms - such as the low bearded irises - are suitable for a container culture.

In the bed, the pretty flowers with the extraordinary blooms are often with perennials and bulb flowers such as peonies (Paeonia), delphinium (delphinium), daylilies (Hemerocallis), poppies (Papaver), tulips (Tulipa) and lavender (Lavandula) as well as with grasses such as such as blue fescue (Festuca cinerea) or giant feather grass (Celtica gigantea) combined.

With the exception of the iris, all iris species develop rhizomes or tubers, not bulbs such as daffodils or crocuses. In spring, the long, sword-like leaves and the flower stems between 15 and 120 centimeters high, depending on the species and variety, peel off from these persistence organs. After the capsule fruits have developed and ripened in late summer or autumn, all the above-ground parts of the plant die and only the rhizome or the tuber overwinter. Irises belong to the herbaceous, perennial plants.

The beauty of the irises is primarily based on their unusually structured flowers, which are bright in many different colors. Iris flowers are characterized by their three-part division: each consists of three upright standards and three additional bracts that hang down. These can be of the same color, but also of different colors. In some varieties, the bracts are fringed or ruffled at the edges, and the various bearded irises have a hairy “beard” on the back of the flower. The pistil, which is composed of a three-branched stylus and the anthers, sits between the domes and bracts.

Parents have certainly heard of the violet root as a teething aid for babies or even offered it to their child. The root, which has been used for centuries, does not come from the blue violet, but from the iris, contrary to all assumptions. In homeopathy, too, the native yellow iris, also known as the swamp iris, is used as a wound healing agent.

However, such areas of application, which have been handed down in folk medicine, must be treated with caution: All iris species are poisonous and can cause typical symptoms of poisoning such as vomiting, diarrhea, nausea, etc. In addition, the hot substances contained in it cause irritation of the mucous membranes, increased salivation and difficulty swallowing. This not only applies to humans, but also to domestic and farm animals such as cattle, sheep, goats, horses, dogs and small rodents.

The ideal location for irises depends on the specific species. Typical swamp plants such as the Siberian iris (Iris sibirica, also known as meadow iris) or the native yellow iris (Iris pseudacorus) fresh to wet places in the garden, for example on a damp meadow or directly at the edge of the pond.

Other irises, on the other hand, need a rather dry location with nutrient-rich, loamy and well-ventilated soil and plenty of sunlight. In contrast to the swamp iris, these species do not tolerate permanent moisture and are therefore best placed in the perennial bed or even in the rock garden. The popular bearded irises, for example, are quite drought-tolerant and therefore harmonize very well with similar species such as sedum or thyme.

Furthermore, the small species in particular can be cultivated very well in pots, as long as you protect the planters from excessive moisture - especially during winter.

The ideal planting time for all iris species are the months between the end of July and the beginning of October, although you can also sink the rhizomes into the ground in March or November if the weather permits.

When planting the rhizomes, make sure that they are laid flat in the planting pit and that the top third still protrudes from the ground. Before planting, loosen the soil thoroughly and add compost and, if necessary, sand to the excavation. For better drainage in the case of rather heavy, loamy substrates, pour a layer of sand about the thickness of your thumb into the shallow planting pit and place the rhizomes on it.

For extensive planting, for example for a border, you should plan between 12 and 16 irises that will stay low and between five and seven high-growing species per square meter.

Planted and well-rooted irises basically only need additional watering if the drought persists. Specimens cultivated in pots, on the other hand, must be watered regularly, but must not stand wet - good drainage is therefore essential, and a thumb test must be carried out each time before watering.

Irises in the garden are enough to be fertilized in March or April with compost and a handful of horn shavings (€ 6.39 at Amazon *), which can be repeated in June if necessary (e.g. if deficiency symptoms occur). As an alternative or for potted plants, use a fertilizer that is concentrated on potash.

Cut the withered flowers about four inches above the ground to prevent seeds and seeds from forming. Some irises can be persuaded in this way to have a second flowering period. You don't remove the leaves until autumn, when they have withered and can be easily peeled off. Do not undertake this step earlier, as the underground rhizomes or tubers draw valuable nutrients from the foliage and store them for the next budding.

Every three to four years you should dig up the large-flowered species in late summer and divide the rhizomes. As a result, you not only multiply the irises, but also rejuvenate the otherwise aging plants and thus ensure increased flower development. Cut the rhizomes at the constricted sections, each section should have roots and a tuft of leaves. Shorten the leaves by about half, so that the plants do not lose unnecessary moisture before they take root.

Irises are usually hardy, so the tubers or rhizomes can remain in the ground during the winter months. The Siberian iris and other species suitable for moist soils are also covered with straw and leaves. Irises grown in pots can also hibernate outside, but should be placed in the rain shade or under a roof.

Provide good snail protection around your iris plantations, because they will eat the juicy leaves within a very short time. Voles, on the other hand, taste the nutritious rhizomes or tubers.

The group of irises (bot. Iris) is huge: 285 species of wild animals alone are known, most of which come from the temperate climatic zones of the northern hemisphere. In addition, there is an almost unmanageable number of natural hybrids and cultivated forms, of which the so-called bearded iris is probably the best known. However, this is not a specific species, but a group of iris cultivars with a characteristic feature: their flowers not only bloom in all colors of the rainbow, they also have a small beard.

While botanists divide the genus into six different subgroups, the gardener only distinguishes between tuber and rhizome irises. The bearded irises already mentioned belong to the last group, which in turn are sorted into three further subgroups:

Interesting varieties for the garden are, for example, these:

Over the centuries, different hybrid species and varieties have developed naturally, which are also popular to plant in the home garden:

Game species for the garden

Furthermore, the gardener makes a distinction between irises for moist and irises for rather dry locations. These uncomplicated species are ideal for the swamp bed or the pond edge:

The following species, on the other hand, prefer a dry and sunny spot in the garden: