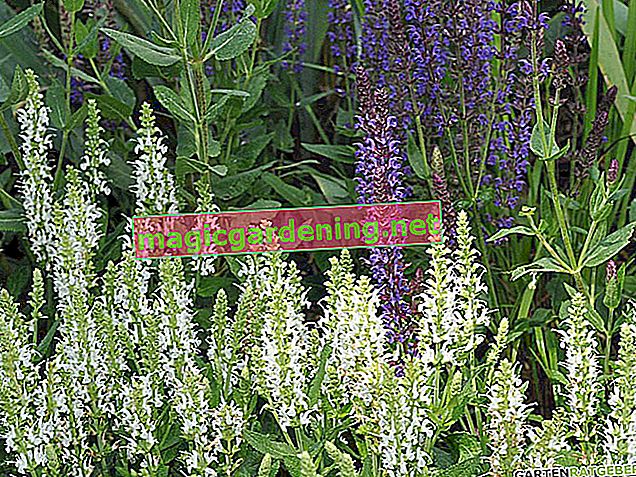 In contrast to the real sage (bot. Salvia officinalis), which comes from the Mediterranean region, the steppe sage (bot. Salvia nemorosa), also known as ornamental sage or flower sage, is a purely ornamental plant. The pretty, rather low perennial blooms beautifully and smells very intense, but is not edible and cannot be used as a medicinal plant. On the other hand, it inspires with a long-lasting flower flora and is an important food plant for bees and butterflies due to its rich nectar.

The steppe sage is widespread between Russia and Europe, where it is primarily at home on dry meadows, along roadsides and - as the name suggests - in the vast steppe landscapes. The plant can also be found in higher mountains.

The steppe sage comes into its own as a gap filler or foreground planting in sunny borders. The plant, which often forms wide cushions, feels particularly at home in stone or prairie gardens, where it can be combined very well with other herbs and perennials as well as with ornamental grasses. Furthermore, the ornamental sage is the perfect companion to roses, especially since the flowering times of the two species coincide.

From a botanical point of view, the steppe sage belongs to the mint family (Lamiaceae). Together with around 900 other species that are distributed almost all over the world, it also forms the extremely species-rich genus of sage (bot. Salvia). The growth of the steppe sage is compact and comparatively low with a height of - depending on the variety - between 20 and 60 centimeters. The plants grow clumpy to bushy, with some varieties being able to form dense cushions. The perennial and hardy perennial also with us has a down-to-earth rosette from which the shoots and leaves, which are covered with numerous, short hairs, grow upright.

The attractive green leaves of the ornamental sage are up to 18 centimeters long and have a lanceolate shape. Its edge shows a slight perforation, the leaf blade is wrinkled to coarse.

Most of the varieties of steppe sage show their attractive blossoms between June and July, which lasts for an average of eight weeks. Some varieties of the so-called flower sage, not without reason, start the flowering season from mid to late May. If you cut back the dead shoots, the ornamental sage will develop a second flower by September, the strength of which differs between the individual varieties. The tiny and mostly very dense individual flowers are arranged in slender, spike-shaped flower candles that rise upright. The color palette of the inflorescences ranges from white to various shades of pink to light or dark shades of purple and blue.

If the faded inflorescences are not cut off, inconspicuous, small nuts develop. These contain the tiny seeds of the steppe sage, which open automatically after ripening. The perennial has a strong tendency to self-sow, but the fruits and seeds can also be collected and used for targeted breeding.

The steppe sage is not poisonous, but it cannot be used in the kitchen or in the medicine cabinet. For this purpose, you'd better grow the aromatic real sage.

The ornamental sage feels most comfortable in a fully sunny and dry location with a well-drained soil. Ideally, place the perennial in a moderately nutrient-rich to sandy, calcareous and loose substrate with a pH value between 6 and 8. The only important thing is that rain and irrigation water can drain off quickly and not build up, as the steppe sage wet feet not at all appreciates.

Basically, the steppe sage, which is mostly sold in bales or containers, can be planted during the entire growing season. If you plant the perennials in spring, they will bloom in the same year, but specimens planted later will not show their bloom until the following year. Before planting, dig in plenty of well-rotted manure or compost in the planting bed and ensure good drainage in loamy soil, for example by loosening the soil with sand. The ideal planting distance between individual plants is about half of the expected final height, even with group or extensive planting. Steppe sage, which can grow up to 60 centimeters high, should be placed in the bed at a distance of about 30 centimeters.

You only need to water the steppe sage during longer dry periods during the summer months, otherwise additional watering is not necessary.

You only need to fertilize the perennial if it is on poor, sandy soil. In this case, give her a starter fertilizer in spring, for example using compost or a universal fertilizer. A second fertilization is also useful after the summer pruning to encourage the plants to flower again.

Cut the steppe sage back by about a third immediately after it has faded and then give it a mineral universal fertilizer and an extra slosh from the watering can. After a few weeks, the perennial blooms a second time, albeit not as strongly as during the spring bloom. The second pruning should be done in spring if possible, as the dried up shoots should remain on the plant as winter protection.

It makes sense to divide the steppe sage every three years. This measure not only serves to multiply the plant, but also maintains its flowering ability and health. Otherwise, older specimens tend to age and thus develop significantly fewer flowers. If possible, make the division in spring. Carefully dig up the plants and pay attention to the most common root runners, which you simply have to cut off and plant separately.

If you don't want to wait so long to multiply, you can cut cuttings around ten to 15 centimeters long in late summer and place them directly in the bed. If you keep the soil slightly moist, the cuttings will take root within a few weeks. Furthermore, it is also possible to propagate using seeds that you have collected yourself or bought, whereby you can sow the seeds in a cultivation container on the windowsill from the end of February and bring the young plants forward in good time before spring. Direct sowing in the bed can take place from the end of April.

With regard to diseases and pest infestation, the steppe sage is pleasantly robust and is rarely infested. A location that is too dark and / or moist and too dense planting can be problematic. The former results in fungal diseases that can destroy the entire population, but if the planting distance is not observed, there is a risk of powdery mildew or an aphid invasion.

Not all varieties of steppe sage are sufficiently hardy in this country. However, in most cases it is sufficient not to prune the plants in autumn and, if necessary, to cover them with sticks.

The wild species of ornamental sage hardly plays a role in the garden. However, there is a large range of different cultivars with purple, pink or white flowers. The varieties all form dense clumps, but differ in growth form and height. The varieties presented here are only a small selection from the wide range on offer.