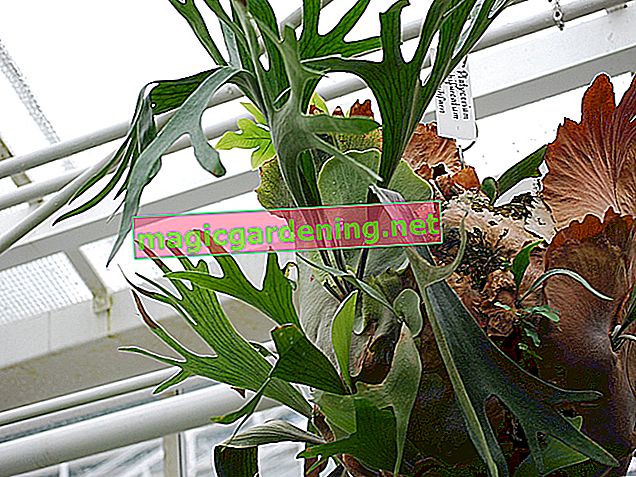 The genus Platycerium, which belongs to the potted fern family, is hidden behind the antler ferns. There are 18 species worldwide, the main distribution of which is in tropical regions. Antler ferns are found in South America and Africa, in southern East Asia, Australia and New Guinea.

The ferns grow epiphytically. They live as epiphytes on trees to get more light. Adult specimens can reach a size of more than 100 centimeters. They develop a short rhizome from which roots and leaf fronds emerge. Within the genus there are solitary growing and colony-forming species in which the rhizome branches or the root tips develop new rhizomes.

A specialty of the antler ferns are their leaves. The spore plants develop differently shaped leaf fronds that differ not only in shape but also in function. Most species have spore-bearing fronds drooping. Their leaf blades are elongated. It divides like an antler at the top. On the underside of the leaf there are numerous spore containers in which spores are developed. These are spread with the wind and germinate on surrounding trees under optimal conditions.

The sterile coat leaves are reminiscent of the shape of a kidney or a shield. These leaf fronds protect the rhizome and roots from drying out or damage. When the leaves are dry, they don't fall off. They remain as a protective cover, provide the plant with nutrients and are overgrown by the freshly emerging leaves. This creates an upwardly open crown in which nutrients and water accumulate.

As spore plants, antler ferns do not develop flowers. The fertile leaf fronds develop spores from which the next generation emerges. These young plants develop sexual plant organs, which are responsible for reproduction.

Antler ferns are used for interior greening. Since they need high humidity, they do best in heated greenhouses. The plant can also be grown in the conservatory or as a potted plant on the windowsill if the temperature and humidity conditions are right. In planters, the antler fern decorates pot gardens with its aesthetic leaves. Due to its overhanging growth, the fern is perfect as a hanging plant.

The antler fern is considered to be slightly toxic because of the saponins, tannins and flavonoids it contains. Symptoms of poisoning occur especially in small children who have eaten large quantities of the leaves. This can lead to diarrhea and vomiting. The gastrointestinal tract can become inflamed. Similar symptoms can develop in pets.

The potted fern plants prefer a bright location with partially shaded conditions. In their natural range, the plants grow in the upper tree layers, where they are protected from direct sunlight by the trees' foliage.

When cultivating in the room, make sure that the fern does not get direct sunlight. The radiation burns the leaf fronds, causing them to fade or turn brown. Rooms that are too dark affect growth. Since the plant absorbs moisture from the air, it needs a humid and warm location.

Orientate yourself to nature when cultivating antler fern. They offer the tropical plant optimal growth conditions if you attach the rhizome to a rough piece of bark with a strong cotton thread. To provide optimal moisture conditions, you can encase the rhizome in sphagnum moss.

Alternatively, the ferns can be placed in a planter or a hanging basket (€ 14.99 on Amazon *). Use a coarse-fiber substrate mixture of sphagnum and peat or coconut fiber. Soil is not suitable for the cultivation of the spore plants.

Antler ferns rarely develop side shoots that emerge from adventitious buds between the mantle leaves. You can cut these offshoots with a sharp knife. Make sure that the mother plant and offshoots are not damaged. In wet and warm conditions, the section quickly forms new roots. Place the separated part of the plant directly in a mesh basket that has been filled with sphagnum.

New plants can also be grown using spores. This method is tedious and requires specialist knowledge, because the actual fern does not grow from the spores, but a tiny sexual generation. This heart-shaped body of vegetation develops genital organs. If the nuclei of the opposite sexes fuse, a new spore plant grows.

Between September and December, the spores are sown on wet peat mulch and covered with a thin layer of sand. The seed boxes are covered with foil and placed in a dark place. The gender generation grows at temperatures of around 25 degrees Celsius. It takes time for the plants to be fertilized and for spore plants to grow. Only then are the plants brought to their final location.

Antler fern in a pot

Conventional planters made of clay or plastic are unsuitable for the cultivation of antler ferns because of the poor air circulation. Use a shallow bowl, as the plant spreads out more in width than in depth. Mesh baskets that you equip with moss are ideal. Coconut shells provide the plants with support and at the same time store moisture, which is continuously released into the air. Antler ferns grow optimally when their rhizome is attached to an epiphyte stem.

If you cannot offer optimal conditions for the antler fern in your apartment, cultivation in a greenhouse is recommended. No specimens grow on the windowsill in a greenhouse. Place a bowl of water next to the plant to keep the humidity constant. Check the water content in the substrate regularly.

The antler fern is in the growth phase between spring and autumn. During this time he needs regular watering. Use soft and room warm water. Filtered rainwater is ideal.

Make sure that the coat leaves do not get any water. Since they spread close to the substrate, dipping is an optimal alternative to watering. Let the fern stand in the water for 20 minutes so that the substrate can soak up the liquid. In winter the plants are in the dormant phase. During this time, antler ferns are moderately watered. Soak the roots in a water bath for a minute or two. After the immersion bath, the excess water should drain off completely.

When to water the antler fern:

Antler ferns have a low nutritional requirement as their dead coat leaves are broken down and used over time. Larger specimens enjoy two to three fertilizers in a growth period. Dip the piece of bark to which the fern is attached in a weakly concentrated fertilizer solution for a few minutes. You can use a commercially available green plant fertilizer. To avoid burning the roots, do not put the plant directly in the solution.

Cutting measures are not necessary. Wilted leaves should not be removed as they act as a humus supplier and protective cover.

Regardless of whether you cultivate your antler fern on a piece of bark or grow it in a pot, it must be repositioned about every three to five years. At the latest when the stability of the plant disappears or the substrate dissolves, you should place the antler fern in a larger pot or on a fresh piece of bark. The roots are fragile and must be very carefully removed from the old base and substrate.

In winter, the incidence of light is significantly reduced, so that the antler fern goes into a resting phase. During this time, the spore plant can withstand temperatures between twelve and 15 degrees Celsius. Water the plant sparingly and do without fertilizers.

Occasionally, antler ferns are attacked by scale insects that settle on the underside of the leaf fronds. They turn out to be stubborn pests against which many pesticides are ineffective. Carefully scrape the insects off the leaves with a knife that is not too sharp. This measure must be repeated regularly until the infestation has been visibly contained. Alternatively, you can dab the parasites with a brush soaked in alcohol.

Fungal spores find optimal growth conditions in poorly ventilated locations with high humidity. If the antler fern is affected, you should remove infected parts of the plant. Treat the plant with a fungicide. With adapted irrigation units and sufficient fresh air, you can prevent fungal infestation.

The plant regularly renews its leaf fronds, so that old leaves turn brown and wither. If only the leaf tips change color, this indicates a suboptimal location. The antler fern does not tolerate drafts. Drought also causes the fern fronds to turn brown.

A hollowed-out trunk provides the ideal subsoil for the antler fern. Put the rhizome in the hole and hang the tree trunk on a wall. A root stump is suitable as table decoration, in the spaces between which the antler fern finds good growth conditions.