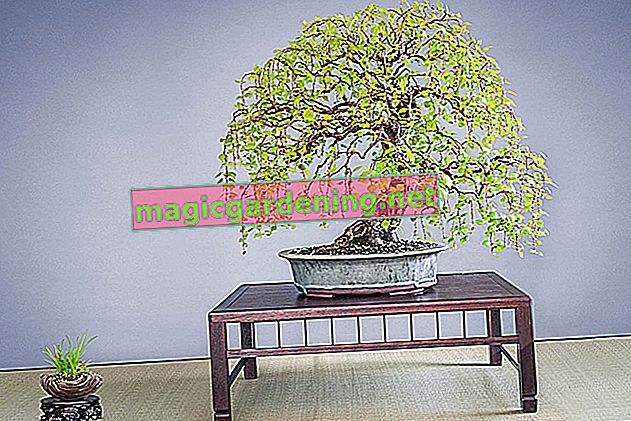 Birch as a bonsai

Among friends of the art of the tree in the bowl - which is what the word bonsai translates - creations made from birch plants are considered rarities. The birch tree has a reputation for being quite a difficult bonsai. Because it needs an intensely sun-drenched location or at least very light penumbra and can quickly shed an entire branch in the event of excessive dryness. Despite these capricious properties of the tree, which is so resistant in the wild, bonsai cultivation is worthwhile: because if the framework conditions are right, an extremely impressive tree is created.

First steps to the bonsai birch

If you dare to use a birch as a bonsai, you can buy ready-made small dwarf trees in the garden center, in the tree nursery or in special bonsai nurseries. Alternatively, there is sometimes a so-called yamadori in the wild, i.e. digging up a tree that has remained small as a boulder and planting it. In addition, you can grow your little birch from seeds. In the pot, you should definitely ensure the best possible drainage. This means that the water must be able to drain off easily.

Position the bonsai in sunny to partial shade, but avoid intense heat. This can dry out the substrate. However, birch trees are basically trees that need a lot of light, and the trunk only shines in its characteristic white if there is enough light.

The nice thing about cultivating your own bonsai trees is that you can give them exactly the shape you want with the right cut. Whenever you prune your bonsai birch, however, it is important to treat the interface immediately with a wound protectant, as birches are very prone to infections. Refrain from pruning your birch in spring and summer. The dwarf tree could bleed to death due to the intense flow of water during this phase. Better to choose the period between November and February.

The birch tree usually provides the design options itself through its natural growth form. For pruning, shorten new shoots from ten leaves to around two leaves. The wire typical of the cultivation of bonsai is possible. However, due to the rapid growth of the birch, you should always replace the wires promptly. To avoid cold breaks in winter, do not wire this season.

How to care for your bonsai birch