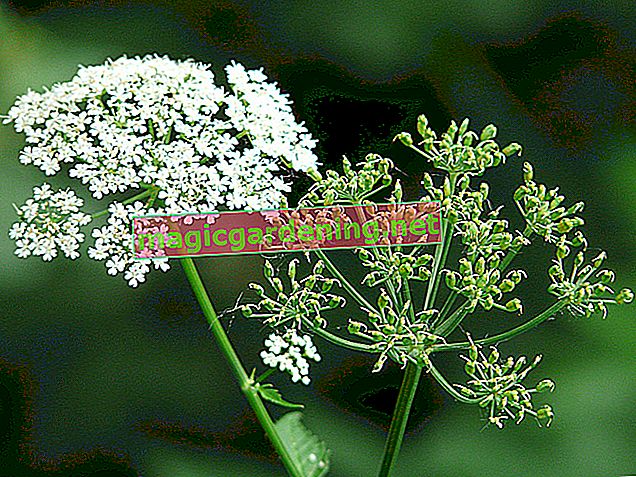 No fighting without protective clothing!

Before you get to work, however, you should first put on protective clothing to protect your eyes, skin and mucous membranes from nettle hairs and from the plant sap. It is important here

Furthermore, all measures should take place on a day with the sky covered: Injuries with hogweed are mainly caused by the influence of sunlight.

The giant hogweed can be effectively combated by mechanical methods, whereas the use of herbicides and other chemical substances is usually not allowed - especially not in the leisure area or near water!

The giant flower umbels of the giant hogweed form up to 50,000 seeds, which are widely distributed by wind, water, animals or vehicles. For this reason, the flowers must not even reach the seed formation stage. So cut off the flower umbels by June at the latest.

However, it is better and more effective to dig up the whole plant. A sharp spade should be used to dig at least 15 centimeters into the ground and, in addition to the above-ground parts of the plant, the rootstock, which is not dissimilar to a turnip - called a vegetation cone - should be cut off or completely dug up. Subsequently, the giant hogweed cannot sprout again due to the lack of roots. If you want to be on the safe side, you remove the soil layer, dispose of it and bring in new soil.

However, digging up the plant only makes sense for individual specimens. Sometimes, however, larger areas are infested, which then have to be regularly mowed close to the ground and, if possible, milled up to 15 centimeters deep. Start doing this in May and repeat the procedure every ten days - all summer long. If available, graze sheep or goats. The animals do not mind the poisonous plant and they eat it off in good time. The giant hogweed is therefore almost never to be found on grazed areas.

To safely dispose of the plant debris, you would have to burn it. The giant hogweed does not belong in the compost, not in the organic waste and actually has no place in the residual waste.

Some people scald the affected areas with hot water. In fact, this thermal method is effective as the heat kills roots and seeds. However, this also applies to all other plants in the area concerned, which is why a different method should be used.