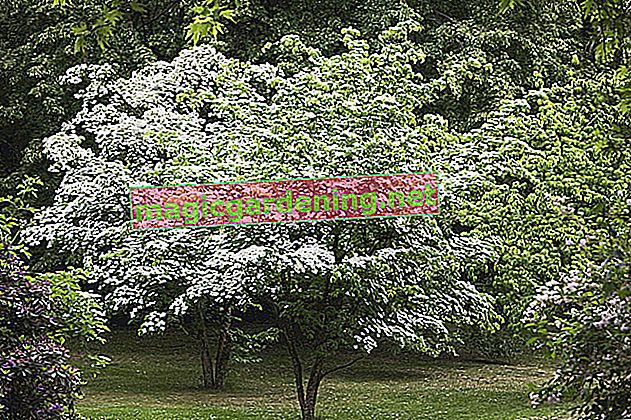 The different Cornus species belong to the dogwood family (Cornaceae) and are mainly found in the temperate, but also subtropical climatic zones of the world. The red dogwood (Cornus sanguinea) and the cornel cherry (Cornus mas) are native to Germany. On the other hand, the fascinating flower dogwoods (Cornus florida, Cornus kousa, etc.) come from Asia and the USA, and they score points with both beautiful flowers and raspberry-like, edible fruits.

The different Cornus species are suitable for different purposes depending on their specific growth habit. Flower dogwoods, for example, should be planted in a solitary position if possible, as they develop expansive crowns over time and require a lot of space. They fit perfectly into Japanese or other Asian gardens and are very suitable as a companion to rhododendrons.

Other species can also be used wonderfully for hedge planting, especially the white, red dogwood and cornel cherry are often used as a bird hedge or as a design element of a natural garden. The Canadian or carpet dogwood in particular thrives as a ground cover under rhododendrons and other woody plants.

Mainly it concerns larger shrubs or small trees, which reach heights of growth between three and six meters depending on the species. Perennial, herbaceous plants are less common among the various species, and most of the dogwood plants are deciduous. However, there are also some evergreen variants that are of little importance in the garden.

The numerous Cornus species also differ in terms of flower shapes. Many develop an ovary with four sepals and four petals each, some - like the dogwoods - in turn have only a very inconspicuous flower, but large bracts. There are predominantly white and pink-flowered variants, with the Cornelian cherry showing yellow and the Swedish dogwood (Cornus suecica) also showing purple flowers. The flowering time is usually in spring, with the native species often showing their splendor as early as March, the American and Asian forms, however, much later. In autumn there are often beautifully colored stone fruits, which can be red, black or white and in some species are even edible.

Most of the local dogwoods are very robust, adaptable woody plants that can cope well with almost any location. The Cornelian cherry, but also the white and red dogwood, prefer a sunny location on fresh, humus-rich clay soils, but can also be cultivated in the shade. Blossom dogwood, on the other hand, are a bit more demanding: these are best planted in well-drained, sandy, fresh soil rich in humus and nutrients. These species feel most comfortable in shady, humid and protected locations.

With the exception of most of the flowering dogwoods, many species are very easy on cutting. The white and yellow dogwoods in particular should be regularly “put on the cane”, ie vigorously pruned, in spring. Species like Cornus florida and Cornus kousa, on the other hand, should not be pruned at all if possible.

Here, too, with the exception of the dogwoods, almost all Cornus species can be propagated very well using cuttings, cuttings and sowing. You can also use rooted ground shoots like cuttings. The different varieties of the flower dogwood, however, are usually propagated through grafting.

Dogwood plants are generally very robust and rarely attacked by pests and diseases. The American dogwood (Cornus florida) in particular is threatened by so-called anthracnose in unfavorable, hot locations. This is a hardly treatable fungal disease that initially shows itself through dark leaf spots.

About 50 different dogwood species are known, many of which can also be cultivated in the home garden. Some of these are wild forms (for example the native cornel, Cornus mas) and numerous cultivated forms. We have summarized the most beautiful trees for small and large gardens for you at this point.

In its natural environment, this popular flowering wood reaches heights of growth of up to twelve meters, but with us it remains significantly smaller with an average of around six meters and a growth width of up to three meters. The species grows as a small tree or shrub and impresses with its lush, particularly large flowers with a diameter of up to nine centimeters. The dull green leaf color changes into a splendid red-violet to scarlet autumn color.

This variant of the Cornus kousa grows more vigorously than the Japanese flower dogwood and is overall more robust than the American flower dogwood. The small trees or shrubs bloom in white or pale pink in late spring. In autumn the Chinese flower dogwood is covered with numerous fruits reminiscent of raspberries. These are edible and have an aromatic taste.

This large shrub often forms several trunks and sparse branches and can reach a height of up to five meters. The numerous yellow flowers that adorn the Cornelian cherry between March and April are particularly pretty. By autumn, fruits similar to cherries develop, which are edible and have a high vitamin C content. They are ideal for making jellies, jams or liqueurs.

This species grows upright, densely bushy and develops numerous shoots that can reach a total height of up to three meters. The yellowish-white flowers appear in May, the white fruits appear in autumn. These are not poisonous, but inedible. The light- to yellow-green colored bark, which catches the eye especially in winter, is particularly striking.

This Cornus species, native to Japan and Korea, grows as a small tree, develops a short trunk and can reach a height of six meters. The species looks attractive in every season, but it attracts everyone's attention, especially during the flowering period between June and July. During this time, the large, cream-white to pink flowers appear. In autumn you pick the raspberry-like, red to pink-colored fruits that can be processed into jellies or jams.

The Japanese flower dogwood is particularly rich in different cultivated forms, which differ only marginally.

The Japanese Cornelian cherry is a deciduous wood and is particularly suitable for a stand-alone position. The small tree reaches heights of up to seven meters and can be up to three meters wide. The bright yellow flowers appear between March and April, the strong red stone fruits are edible and can be used to make jams, jellies and the like.

This large shrub occurs in large numbers in East Asia, especially in northern India, in Nepal, China, Japan and Korea, and thrives primarily in the light shade of large trees. The pagoda-like growth is striking, as is the distinctive blue-green foliage. The wood can be up to eight meters high and up to five meters wide, so it needs a lot of space.

This very robust, indigenous shrub, which grows up to five meters high, bears its name for a reason: not only because the green leaves turn bright red in autumn, the young shoots also show a striking red color during the winter months. From May the white flowers arranged in umbels appear. The black-violet, berry-like fruits are slightly poisonous and not suitable for consumption.

The carpet dogwood, also known as the Canadian dogwood, is neither a tree nor a shrub, but a ground cover that reaches a maximum height of 20 centimeters. The pretty, cream-colored flowers appear from the end of May, in autumn pea-sized, red fruits adorn the wood.

The dwarf dogwood, which only grows up to 75 centimeters high and 150 centimeters wide, is particularly suitable as a ground cover, and cuts a particularly good figure in heather gardens. Blossoms and fruits appear inconspicuous, but the green to bright red wood shines all the more. In autumn the fresh green leaves take on an orange to purple tint.