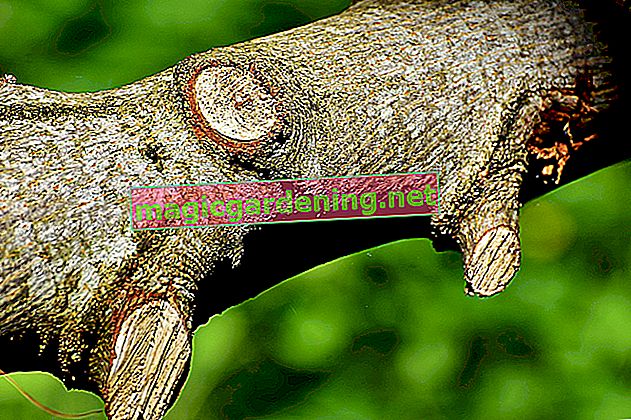 In the past, trees were usually cut in late autumn or early spring - during hibernation. Today, however, tree care experts advise you to do pruning in the growing season between March and September.

Why? The summer cut is gentler, wound healing begins immediately and there is no risk of frost damage to the wound site. Nevertheless, cutting during hibernation has a few advantages over cutting during the growing season.

Since time immemorial, deciduous trees and other deciduous trees have been cut in early spring and late winter. A cut in suitable weather in January or February - i.e. well before budding - also has advantages:

So winter pruning brings one thing above all - wood growth. If I cut my young fruit trees that should still grow vigorously, this naturally has to happen in late autumn or in February at the latest. If I cut my 15-year-old maple, which is already getting too big for me, I should definitely do this in summer to remove leaves and not stimulate growth any further.

In tree care there is now a tendency to cut during the growing season. The tissues are already active and the "healing" (sealing off and walling up) of the wounds begins immediately. In addition, the cut trees react less strongly with new shoots, "water shoots", which are worthless for the canopy, occur much less often. Advantages of the summer cut:

The summer cut extends from March to the end of September. During this period, you can always cut, but there are certain unfavorable situations:

Tree pruning is possible all year round, but you should know what you want to achieve. If you cut a tree in winter that is not supposed to get any bigger, you can simply cut it again in summer. If you want to make major corrections to fruit trees, you should definitely do this in summer, even if the tree is still to grow. Here the pattern is also divided between summer and winter.

Background: How does the tree react to the cut?

Research on the subject has shown that trees can handle this process most efficiently in the growing season between March and September. If you cut during hibernation, larger areas of dead wood tissue are created. If you cut branches with a diameter that is too large (> 10cm or> 5cm in the case of poor "gravel"), the tree will not be able to build up the safe barrier between healthy and dead wood tissue.