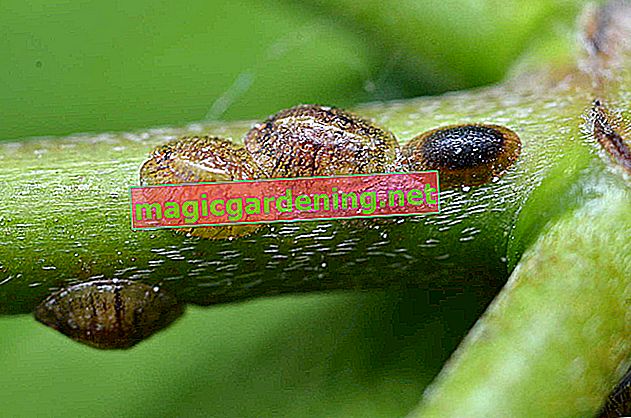 What helps against ants in the kitchen?

Before you take any action, you should identify the species. Stray ants can be transported outside with a glass. If an ant road has formed, you should follow it to the origin and end. In this way you can determine what the insects are attracted to and where their nest is.

If the ants have settled in the wall or behind a cupboard, you should get rid of the nest. Use baits that have been mixed with an attractant. You can then fight the ants by hand or use a poison. This should have a long latency period so that the ants carry the poison into the nest and feed their brood there. It is not easy to find a suitable bait. Ants are very picky and do not eat everything, although they are considered omnivores.

Confuse and drive away

If the nest is outside so that the ant trail leads to a source of food, you should remove this first. You can then remove the ants odor traces. That is not easy, because the markings can be detoured off the recognizable ant route. You should therefore thoroughly clean the floor and walls with water and a few splashes of vinegar or tea tree oil.

After the ants have been fought, it is important to remove the old nest. If the insects have nested in the partition walls, you should think about a renovation. If the nest remains, it will be colonized again by immigrant ants within a short time. Ant poisons work against red, brown or black ants regardless of the species. They contain various active ingredients that are used as contact or food poisons. Nevertheless, there are ants who are not particularly impressed by food poisons. In order to be able to develop their full effect, the substances must be mixed with an attractive bait. Otherwise there is a risk that the ants will not eat the active ingredient.

The chemical club is the last resort. Poisons pollute the environment and endanger health.

It is often reported that the plague of ants recurs after a few days. This observation is not an indication that the agent had no effect. After a people has been exterminated, the next colony quickly follows. Ants send out scouts looking for new nesting places and food sources. They follow the scent traces of the old people and settle in their nests when there is no competition. The biocide is an effective contact poison with a long latency period. It is mixed as granules in bait or given as a pouring agent. So that neither children, pets or birds ingest the toxin, the agents are provided with a bitter substance. After the ants eat the venom, symptoms do not appear immediately. They return to their nest and feed the ingested food to the queen and brood. After a few hours, the poison leads to death.

The insecticide belongs to the group of pyrethroids and acts as a contact poison when used as an infusion. The residues are effective for up to five months, with an insect repellent effect also occurring. If the ants come into contact with the agent, they ingest it through the surface of the body. The active ingredient is distributed throughout the body and affects the nervous system. First, uncontrollable nerve impulses appear, making the ants appear excited and active. Then there are cramps and coordination disorders, until finally paralysis and complete inability to move.

The insecticide is obtained from the bacterium Saccharopolyspora spinosa and is used as a contact and food poison. Symptoms manifest themselves in paralysis after only a few hours. The nervous system is massively damaged, so that the ants are completely unable to move. Spinosad is an effective poison, but it has to be dosed sufficiently. If the dose is too low, it will not have the desired effect.

This insecticide from the group of pyrethroids has a broad spectrum of activity. It acts as a contact and food poison, which severely damages the ants' nervous system. The insects become immobile and die. The Federal Office for Risk Assessment advises against its use in private households. Many manufacturers therefore advise that the products should only be used professionally or by knowledgeable users.

Isolated ants do not have to be fought with a chemical agent. There are natural substances that, when used correctly, prove successful. If there is an ant nest in the building, these means will have no effect.

Before you fight the ants, you should determine them yourself or have them determined. The German ant protection station is a first point of contact.

This species is not native to Europe, but was introduced from Asia. It is now spreading around the world, although it does not survive winter in frosty temperatures. The pharaoh ant is bound to warm surroundings, which is why it prefers to settle in buildings with a good temperature. Since it is considered to be the vector of disease, timely control is necessary. The species is a major problem in hospitals, as blood and pus are attractive to the insects. The leavening agent does not cause the often assumed effect of ants bursting. Rather, baking soda changes the pH value in the organism. Certain enzymes that are vital for ants can no longer survive. After all, the ants die too. The prerequisite for a corresponding effect is that baking powder is used correctly. Every single ant must be pollinated thickly. Then the smallest particles clog the trachea and settle on the antennae. The insects clean their antennae and pick up the powder. Behind the species is the Dalmatian insect flower from the genus Tanacetum, which has been used for centuries for its insecticidal effect. All parts of the plant contain pyrehtrins. These are very highly concentrated in the flower heads. The daisy family is used today to produce the insecticide pyrethrum. It affects the ants' nervous system by damaging the nerve pathways. The effect is immediate. The active ingredient is broken down faster when exposed to sunlight than artificially produced pyrethroids.

Suddenly ants in the kitchen

There are various reasons why ants feel comfortable in a human environment. They are not a sign of unsanitary conditions. Isolated ants are usually not a problem, as they can only have strayed into the apartment. Many ants that have already formed an ant route are more problematic. Ants are attracted by the smell of various foods. Sweet smells are particularly attractive. The insects not only eat overripe fruit but also the smallest crumbs that have accumulated in the kitchen behind the stove or under the seating area. Some ants are omnivorous and will attack meat, cheese or bread. Pet bowls or the open organic waste also provide ample sources of food.

Occasionally, the insects are brought in unintentionally. This can be done using a flower pot that is fetched from the balcony or terrace in winter and placed in the basement. Earth-dwelling ants have often built a nest in the substrate and then spread around the apartment. In rare cases, certain species of ants end up in the kitchen with food packaging. The pharaoh ant is one of the species that settles in warm rooms with good food availability. It can be introduced, for example, through bakery products.

Put the bucket in a water bath so that the ants are flushed out.

Modern building materials offer innovative nesting possibilities that the ants did not know before. Thermal insulation in particular appears to be attractive if it is affected by splash water or moisture. The material is reminiscent of the structure of dead wood and prompts ants to build nests. Often old roof beams that have been damaged by moisture and insects are also an ideal nesting opportunity.

If the building is not an option as a nesting site, you should examine the area a little more closely. A house in the middle of a natural garden also offers ants an optimal habitat. They nest in beds that line the building and easily get into the apartment through open windows or cracks in the door.

Where do ants come from in the kitchen?

If you spot ants in winter, they are mostly overwintering species. They can nest in the insulating materials of the partition walls or in the roof beams, as this is where they often find optimal nesting conditions. Native species retreat into hibernation during the cold season and only wake up again in spring. Mild temperatures can disrupt this rhythm. Occasional ants find their way into the apartment from the adjacent bed or garden. You will be attracted by different aromas and come through all the crevices.

What can you do against ants in the kitchen?

First you should find out what kind it is. Help is available from the German Ant Conservation Office. After identifying the species, you need to find out if the ants made a nest in the building. Trace ant trails to the beginning and end. Nests in the apartment should be controlled and removed by suitable means. Renovation is usually unavoidable. Ants that are looking for food can be prevented from their activities by scents.

Which ants come into the kitchen?

The most common species found in homes is the brown garden ant. It can easily be confused with the two-tone garden ant. If you observe small ants that have a light and yellow body color, it may be the pharaoh ant that has been introduced. In contrast to these mini ants, large species such as wood ants and ross ants tend to avoid being close to humans. If they are flying ants, then the likelihood of a nest in the walls is very likely. The insects swarm out because they are looking for a partner.

Is there a rent reduction for ants in the kitchen?

If you find ants in the apartment, you should inform your landlord. This must take over the costs for the one-time control. If regular measures are necessary, the landlord can pass on the costs incurred as ancillary costs from the tenant. A reduction in the rent is only permitted if the ant fall no longer enables normal living.