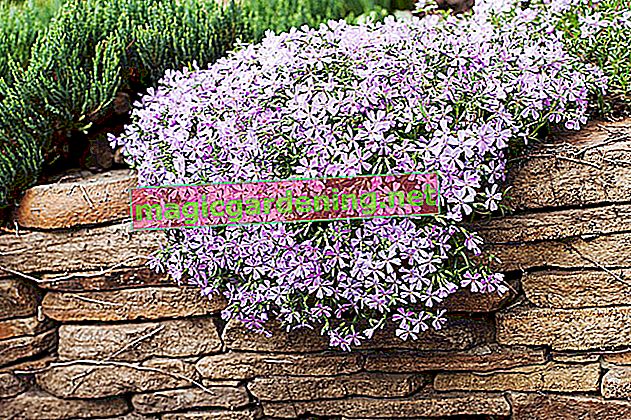 The upholstery phlox, which is also called carpet phlox because of its growth shape, has the Latin name phlox subulata. The kind belongs to the genus of the flame flowers within the family of the barrage plants. It is native to the northeastern United States, where it grows on sandy soils at the edges of forests and on fallow land. In Central Europe, the upholstery phlox is a popular ornamental plant in parks and gardens.

Phlox subulata grows as an herbaceous plant and covers the ground with thick cushions. The individual shoots grow creeping or ascending and form numerous branches. The upholstery phlox reaches heights of between five and 20 centimeters. It develops a fine network of roots that consists of fine roots. They reach up to 60 centimeters into the substrate. The plants reproduce via underground runners.

From March the plants develop salver-shaped flowers, the petals of which have grown together to form a tube in the lower part. The corolla lobes are spread out flat and slightly incised at the edge. The flowers are terminal and about 2.5 centimeters tall.

Phox subulata develops pink flowers, the center of which is purple. The numerous cultivated forms shine in a wide variety of color nuances from white to pink and red to blue. Some varieties develop multicolored flowers with a contrasting colored eye. They attract wild bees and butterflies to feed on the sweet nectar. The flowering period extends into June.

Phlox subulata is an evergreen plant. Their leaves are very narrow to needle-shaped and have a smooth leaf edge. The surface is softly hairy. The leaves sit in opposite directions on the shoot. They appear green all year round and lay across the floor like a carpet. In winter the foliage is a little looser than during the growth phase in summer.

The cushion-shaped perennial decorates rocky crevices in rock gardens and joints on wall crowns. Due to its demands on the location, the herbaceous plant is suitable for beautifying dry stone walls. As an ornamental plant for the border of the bed, the upholstery phlox has not only aesthetic but also functional purposes. It visually delimits perennial plantings and flower beds and creates a magnificent image on terrace slopes. The upholstery phlox sets color accents between floor slabs or on stairs.

These are suitable plant partners:

Phlox subulata can be planted as a dominant perennial in the bed or as an underplanting of woody plants. The varieties are suitable for decorating troughs and flower pots. They decorate house entrances and can be used as grave decorations.

The fresh flowers of the upholstery phlox are a real delicacy. They taste sweet and sweeten not only desserts but also refreshing starters. The petals refine salads or herb butter. They can be used for colorful flower ice cubes or ice cream. Pluck individual blossoms in spring. The taste is fully developed during the main flowering period. To keep your plant looking attractive, you shouldn't pick too many flower heads.

The carpet phlox prefers a location with full sun exposure. This is where its bloom comes into its own. The perennial can be planted in partial shade, although its flowers are weaker due to the lack of light.

Fresh soil with a loamy or clay substrate with a high proportion of sand or gravel is ideal. The upholstery phlox likes a moderately nutrient-rich soil, the pH of which is between 5.7 and 7.5. It finds optimal growing conditions on a soil with a humus top layer.

Requirements of the upholstery phlox:

The upholstery phlox reproduces via root runners and often forms large stands in suitable locations. If the carpet of plants spreads out of control, you can divide the stock. The ideal time for this measure is spring, just before or while the budding can be seen. You can also divide the plant in late autumn, when winter is not yet around the corner.

Dig up the root ball and cut it into small pieces. Plant the divided root ball immediately so that the fine roots do not dry out.

Propagation via seeds is possible. You can pick the fruits of the upholstery phlox after they have ripened. Since the seeds only sprout after a cold stimulus, you should sow them outdoors before winter. It is possible to move it forward in the house at temperatures between 16 and 18 degrees. These plants are sensitive to frost in the first year and should only be planted outdoors in the second year.

Since Phlox subulata is perennial, the species is mainly reproduced by division or cuttings. The cultivation takes place in related phlox species that grow as an annual. Seed multiplication has the disadvantage that the next generation is not always true-to-variety. The offspring combine characteristics of two parent plants and can develop different flower colors.

You can cut cuttings from the upholstery phlox between May and July. The shoot tips should be about five centimeters long and have at least three pairs of leaves. Remove the lowest leaves and place the shoot in a planter filled with potting soil or directly outside in a shady place. Keep the substrate moderately moist for the next few weeks. As soon as fresh leaves develop on the cuttings, they can be transplanted.

Early spring is the optimal time to plant the upholstered phlox in the garden. The perennials then have enough time to grow well by winter. Regular watering after planting promotes root formation.

Upholstery phlox in a pot

The upholstered phlox cuts an equally good figure in the bucket as it does outdoors. Use a large pot to allow the roots to spread and branch freely. The planter should have a drainage hole to prevent water from building up. A drainage made of gravel, expanded clay (€ 17.50 at Amazon *) or pottery shards on the bottom of the pot ensures better water drainage.

Because of its low growth form, the upholstered phlox is ideal for beautifying balconies. The creeping shoots are particularly effective in flower boxes (€ 13.18 at Amazon *). They grow over the edge of the vessel and form an aesthetic curtain of flowers. The varieties feel particularly comfortable on south-facing balconies with direct sunlight. The perennials spend several years here.

In the open air, the upholstered phlox only needs additional watering in long periods of dryness. On particularly hot days, you should water the plant in the evening as soon as the soil has cooled down a bit.

If your upholstery phlox grows in very dry locations where the water drains off quickly, you should mulch the soil. As a result, the moisture from the subsoil evaporates less quickly and after a while a humic layer forms on the root area, which maintains the water balance.

A carpet phlox does not need regular prunings because its growth remains compact. You can regularly remove withered shoots and inflorescences. This means that the buds that have already been created receive more light. Shorten half of all shoot tips immediately after flowering. In this way, the plants can be stimulated to flower again.

After a few years you should rejuvenate the upholstery phlox so that the plant grows more luxuriantly again. It tolerates a radical cut back at hand level. This measure takes place in late autumn or very early spring for early-blooming varieties. Late blooming phlox varieties keep their foliage through the winter so that the roots are better protected from the cold. They are pruned shortly after winter between February and March.

The nutrient requirements of these perennials are low. You can add some compost before the flowering period begins. This measure is also recommended as preparation for winter. A layer of mulch protects the soil from freezing and ensures that the evergreen plants get enough moisture even during the frosty months.

If your plant shows signs of nutrient deficiency, you should add some vegetable manure from nettles to the watering water or rake a handful of horn meal into the ground. If the plant is undersupplied, it leaves flowers and leaves hanging.

Phlox subulata can withstand temperatures down to -18 degrees Celsius. The plants survive the winter in Central Europe without any problems. They should be watered on frost-free days, because they do not reduce their metabolism even during the cold months. In strong sunlight, you should cover the leaves with a layer of brushwood. The material protects against excessive evaporation and prevents the shoots from drying out.

The upholstery phlox can be replanted during the entire growth phase. It will regenerate faster in the new location if you transplant it shortly before the flowering period. With this measure, you can divide the root ball and thus rejuvenate the plant.

The upholstery phlox is attacked by various pests that feed on leaf matter and plant sap. If the infestation remains undetected for the time being, the pests can weaken your plant to a great extent.

The upholstered phlox is rarely attacked by small stems. The tiny nematodes damage the plant, whose shoots and leaves wither over time. To combat the pests, pruning close to the ground is necessary. The plants then need some time until they have regenerated.

Since the nematodes overwinter in the substrate, sustainable control is difficult. As a preventive measure, you should transplant the infected upholstery phlox to a new location and completely shake off the old substrate from the roots. Marigolds decimate the pests. They secrete substances that are toxic to the nematodes.

Occasionally, the perennials are attacked by caterpillars that feed on the leaf mass. They leave mealy secretions on the leaves, flowers and fruits. Collect the caterpillars regularly. Insecticides should be used with caution as they not only kill pests but also beneficial organisms.

Under the wrong care conditions, the upholstery phlox can be attacked by various fungi. Be careful not to water the plants from above. Fungal spores find optimal growth conditions in the dense stands. Treating the plant with a fungicide helps against a strong fungal attack.

If you see a white floury coating on the leaves, powdery mildew may be an issue. The fungal spores spread when the weather is nice. You need dry conditions. Infested parts of the plant should be removed generously so that the fungus does not spread any further. Improved ventilation helps preventively.

This fungus causes a whitish or gray coating on the underside of the leaves. Its spores spread in cool and humid conditions. Remove the affected areas and dispose of them with household waste. Make sure that the air can circulate between the shoots.

Create an exciting arrangement with different varieties that create a firework of colors with constantly new flowers between spring and summer. Tall phlox varieties and small forest phlox varieties not only beautify the garden, but also decorate romantic bouquets as cut flowers.

Upholstery phlox does not bloom

If your upholstery phlox isn't blooming, check it out for a pest infestation. Pests on leaves or roots weaken the plant so that its bloom is weakened. Dig up the plant and remove damaged roots. To prevent nematode infestation, you should shake off the substrate completely from the root ball and place the plant in fresh substrate. Then water the plant so that the soil compacts.

If the root ball is too deep in the ground, the plant also reacts in some cases by not blooming. In this case you should dig out the root ball generously and set it higher so that its surface is flush with the upper layer of soil.