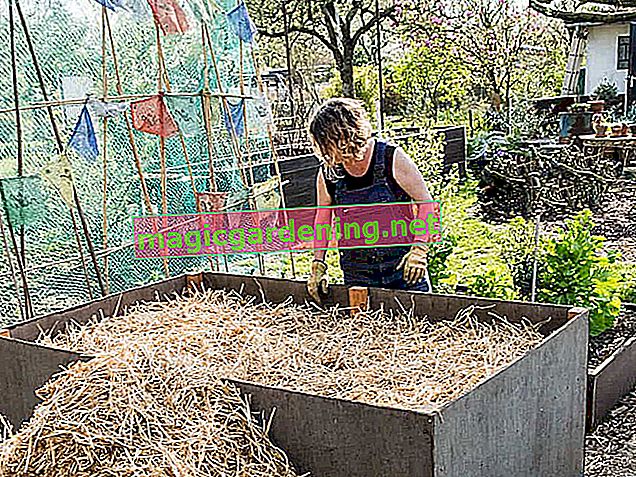 You can get seed potatoes in the garden center or via garden mail order. By pre-germinating the potatoes about two to four weeks before sowing, you can accelerate the growth of the tubers.

The sowing of the new potatoes begins in March. Mid-early and late potatoes are sown from mid-April to late May.

The bed for the potatoes is dug up as early as autumn. In spring, you break up the clods with a cultivator and rake the soil smooth. With the cultivator handle, you create furrows about 10 cm deep with a row spacing of at least 60 cm.

Don't forget to pile up!

Potatoes must necessarily be piled up. This not only protects against frost, but also against light radiation and the formation of green areas due to the poisonous solanine.

The first paddling is done directly after sowing, by raking up soil over the furrow to form a dam with the rake. If the first shoots later look out, a new layer of soil is piled on top.

Until the potatoes bloom, repeat the piling up every 2 weeks until the hill is about 30 cm high. Especially when the dam is worn away by heavy rain, new piling has to be done.

A foil tunnel (€ 9.92 at Amazon *) protects especially new potatoes from frost. A positive side effect: the air under the film heats up and promotes growth. There are inexpensive poly tunnels in the garden trade as a kit.