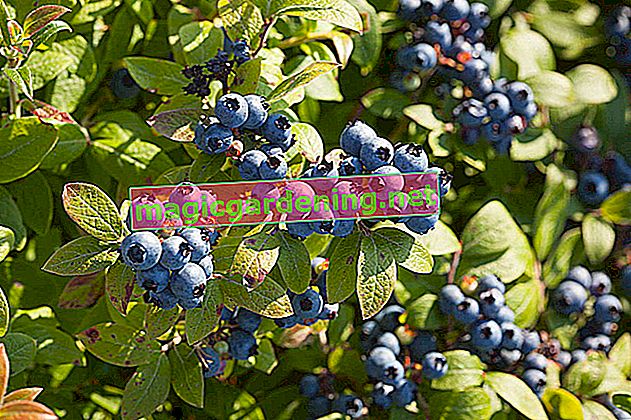 The cultivated blueberries resulting from selection and breeding

The forest blueberries native to this country are also popularly referred to as blueberries because, in addition to a bluish skin, they also have a blue fruit juice that can sometimes turn your fingers and tongue blue. On the other hand, the cultivated blueberries that originate from North America and are the result of breeding efforts have an almost white pulp, and they do not stain. On the other hand, the fruits on the bushes are not only more numerous, but also larger and juicier. In the meantime, more than 100 known cultivars have emerged through crossbreeding, of which around 30 have been able to establish themselves dominantly in the cultivation areas and in private gardens.

Since these blueberry bushes can bring you a yield of four to eight kilos per bush after a few years at a height of up to 3 meters, you may have to think about preservation by freezing or boiling.

The advantages of a mixture of different varieties

A great advantage of blueberries over other types of fruit is the fact that their fruits ripen over a period of several weeks during harvest time. You can extend the season even further by mixing early, mid-early and late varieties in your garden. From the beginning of July, you can harvest blueberries of the Vaccinium Earlyblue variety and end the season in September with the berries of the late Vaccinium Jersey variety.

A mixture of different blueberry varieties in the garden not only enables a longer harvest season, this procedure also enables a more relaxed garden appearance through different flower colors and times of autumn color.