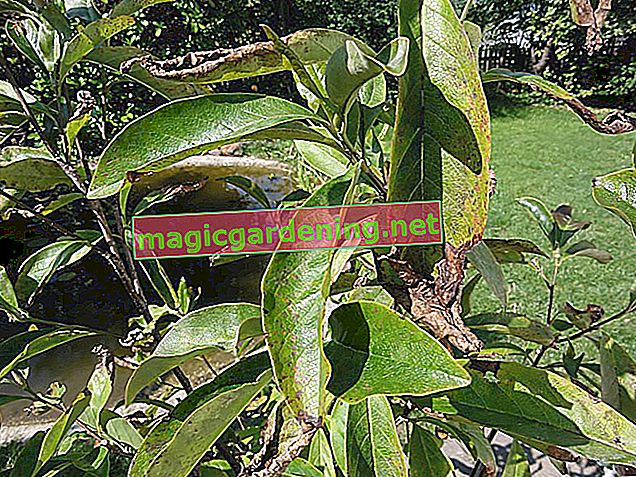 The leaf spot disease is caused by Pseudomonas bacteria, which cavort mainly in raindrops or rainwater. It occurs mainly in warm but humid weather and is characterized by black spots surrounded by a yellowish halo or even holes on the leaves. As a result, the affected shoots die. This very widespread plant disease is also a problem with deciduous magnolia species, because the bacteria overwinter in the shoots and often cause frost damage.

The best way to combat leaf spot disease is through prevention: It is important that the crown of the magnolia is not too dense, but that it lets in enough light and air. The leaves should always be able to dry off quickly, which is why you should never water from above (especially not with rainwater) in summer, but only directly at the roots. In the event of an infestation, the affected parts of the plant must be removed as soon as possible.

There are two different types of powdery mildew, both of which are initially shown by a whitish or greyish coating on the leaves. Later the leaves turn brown and fall off. This plant disease is caused by Erysiphaceae fungi.

Powdery mildew can be combated very well with a garlic stock or lactic acid. For the latter, mix one part whole milk with nine parts water and spray the magnolia over a period of several days. If the infestation is severe, only fungicides can often help. Infested shoots and leaves should be removed immediately, as powdery mildew spreads very quickly.

Weakened magnolias are often attacked by whitefly or scale insects, the excretion of which promotes fungal diseases (e.g. with sooty mildew) and aphid infestation. The roots, on the other hand, can be eaten by larvae or caterpillars living underground and thus damage the tree. Voles and black weevil larvae in particular like to enjoy the juicy magnolia roots.

Prevention is better than cure, which is why you can help endangered magnolias with a special fungicide fertilizer to get rid of annoying nuisances quickly. By the way, dried coffee grounds should also help.