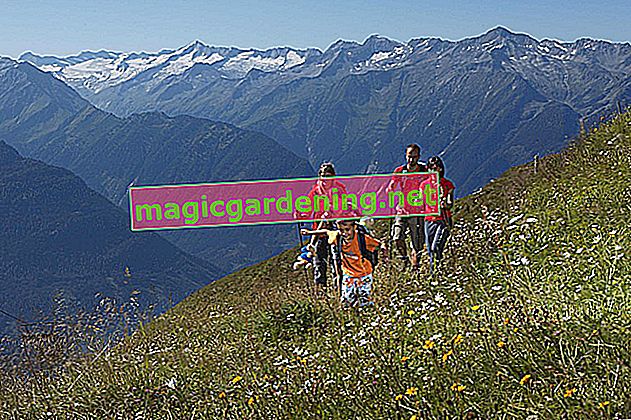 The word “humus” comes from the Latin language and means something like “earth” or “soil”. In general, dead organic material is referred to in its entirety as humus, a distinction being made between permanent humus and nutrient humus.

Gardeners also differentiate between the forms of humus

In a nutshell, humus is an essential soil component that arises from rotted parts of plants.

What is humus soil and where do you get it from?

The commercially available humus soil, on the other hand, is not pure humus, instead it is potting soil mixed with humus. A good mix consists of roughly equal parts of humus and potting soil. You can buy it anywhere in stores, since humus soil is available from various manufacturers in hardware stores and garden centers, but also at discounters or on the Internet. But be careful when buying: Choose high-quality branded goods as possible, as the discount stores in particular often consist of inferior material. Products containing peat are also not recommended, as they are, on the one hand, to be viewed critically for ecological reasons and, on the other hand, do not result in optimal potting soil.

What is humus soil used for? Humus not only stores nutrients and water, but also filters pollutants from the environment. So humus makes an important contribution to the binding and storage of carbon and other trace gases. At the same time, humus is a valuable habitat for numerous soil-living animals and microorganisms. Humus soil is very versatile in the garden, for example for soil improvement, for planting new plants, for fertilizing existing plantings and for repairing damaged lawns. For the latter use, simply apply loose humus soil to a lawn in need of repair, distribute it evenly with a rake and then water the lawn. If necessary, you can also re-sow it.

Is humus and compost the same thing?

Our word “compost” is derived from the Latin term “compositum”, which means “what has been put together”. Compost means an organic material collected in a heap, which rots with the help of oxygen and soil organisms. This is why the nutrient-rich material is also known as “rotting”. At the end of the composting process, part of the finished compost turns into humus, which makes up the particularly valuable component of this organic fertilizer.

Where can you buy good compost?

In the garden, compost earth fulfills similar tasks as humus earth, and both types of substrate are often used synonymously. You can obtain high-quality compost soil either from your own garden - or from the public composting plants of the local city or community waste disposal companies. These are also known as recycling yards. You get the finished compost loose and at a comparatively low price, but you have to pick it up yourself at the responsible recycling center or directly at the composting plant. Make sure to purchase the nutrient-rich organic compost, as the green waste compost, which is often separately composted, is rather poor in nutrients.

How to recognize good humus soil You can recognize good humus soil primarily by its smell and its texture. Before you buy larger quantities of a particular brand (and then you may find that this humus soil is of poor quality), you should first take a smell and taste sample of a smaller quantity. High quality humus soil

If, on the other hand, it is fully matured compost, no odor can be detected here. Poor quality humus soil, however

In addition, some industrially produced humus soil only develop an extremely unpleasant odor after the first watering.

Humus soil can be used in very different ways in the garden and also for potted plants: Area composting for a better supply of nutrients

Now humus cannot be kept indefinitely, but decomposes over time. So you have to add nutrients to the soil regularly so that the process of humus formation continues. So-called area composting is very suitable for this purpose. To do this, either apply green cuttings (e.g. lawn clippings or spinach) as mulch (€ 213.00 at Amazon *) between the plants or sow a harvested bed with green manure plants. You let both rot and then work it into the soil.

For many plants - even if not for all - a high humus content in the soil is an advantage. In order to significantly increase the humus content of your garden soil, however, you do not necessarily need to buy expensive humus soil. Instead, gradually improve the soil using the measures shown in the table. However, this is not a question of individual measures, because the soil only develops as a whole: the soil life increases, as does the nutrient-rich humus layer.

Animals living in the ground, such as earthworms, are essential for humus formation. You can speed up the process by targeting the earthworms. You can either collect the animals in nature (wait for a rain shower to do this) or buy them in stores. You can make humus soil in smaller quantities in a composting container: mix garden soil with beech leaves and chopped up straw and expose earthworms in it.

What is Terra Preta and can you make it yourself?

Terra Preta is a type of compost that is mixed with crushed charcoal and is therefore said to be particularly rich in nutrients. The principle comes from native South American people from the Amazon region, who have been fertilizing their gardens in this way for centuries. Now we have no rainforest plants here and so we cannot “recreate” the original Terra Preta. However, you can mix your compost with biochar and make this soil more valuable for plant nutrition - charcoal contains many important nutrients in easily available form.

What is black earth?

Black earth is particularly rich in humus. Basically, the fertility of the garden soil can be recognized by its color: the darker it is, the higher the humus content and the more fertile the soil. However, this is only a rule of thumb, as other factors such as the pH value are also relevant for this connection. Bog bed soil is also very dark, but has an acidic pH value. However, black earth has the right pH level as well as rich soil life.

Is humus the same as topsoil?

No, humus and topsoil are not the same. Instead, topsoil is the top, fertile layer of soil that contains a large proportion of humus and other components. Good topsoil also contains minerals in the form of sand, clay, loam or silt, many nutrients (including nitrogen, phosphorus, etc.) and countless soil organisms.

How deep should the topsoil be?

When creating a new garden, you should apply a 40 to 60 centimeter thick layer of topsoil. This is completely sufficient for the growth of most plants, especially since you can contribute a lot to the constant humus development in the soil through good soil care. In fact, topsoil is not “static”, but changes and develops over time.

Many Mediterranean plants do not tolerate humus and grow better on mineral, humus-poor soils. These include herbs such as sage, rosemary or lavender.