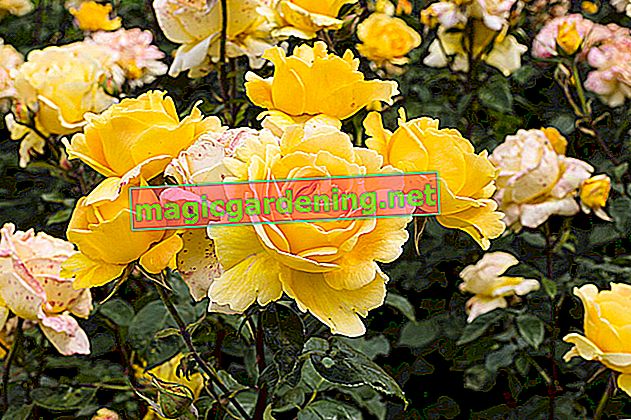 Photinia 'Devil's Dream' (R) convinces with its fiery red leaves. It grows compactly because it forms short shoots and numerous branches. As a result, this loquat develops a dense hedge in a short time. The loquat 'Dicker Toni' reaches heights of between 150 and 200 centimeters. The short and strong shoots are typical of this variety. The foliage of this new variety is leathery and is insensitive to locations exposed to wind.

The small brother of the popular 'Red Robin' is called 'Little Red Robin'. It grows between 100 and 150 centimeters tall and resembles its namesake. The 'Robusta Compacta' loquat is characterized by its good winter hardiness. It grows between 120 and 180 centimeters high and can reach heights of growth of up to two meters under optimal conditions at the site.

The loosely upright shrub 'Red Robin' is one of the most widely planted medlar varieties. Its easy-care and undemanding properties make it suitable for creating hedges. With an increase of between 20 and 30 centimeters per year, the wood grows comparatively quickly. It grows to a height of between 150 and 300 centimeters.

The Loquat 'Red Angel' is similar to the 'Red Robin' variety. Her trademark are the slightly slotted leaves, the edges of which appear wavy. This variety is not hardy and should be cultivated in a tub. The 'Camilvy' variety reaches heights of growth like 'Red Robin'. Their leaf coloring is more intense than that of the popular variety. 'Camilvy' is growing 50 centimeters per year. Their growth is loose and broadly bushy.

The Photinia 'Pink Marble' (R) sprouts in spring with bright pink to pink leaves that have an elegant appearance. As the summer progresses, the fresh leaves take on a green hue. In autumn they get their striking pink color a second time. The leaves of Photinia 'Curly Fantasy' have a wavy leaf margin that is serrated irregularly. The variety reaches heights of growth of up to 300 centimeters.