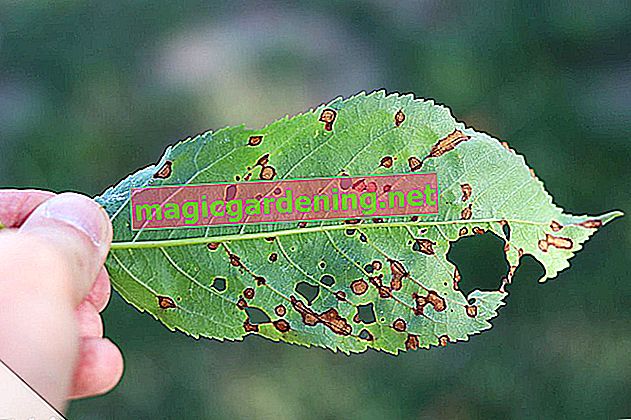 What is shotgun disease?

Because of the perforated leaves (which gave the disease its name), many amateur gardeners initially suspect a pest infestation. In fact, the shotgun disease is a fungal plant disease caused by the hose fungus Wilsonomyces carpophilus (also: Stigmina carpophila).

This occurs mainly after a damp and cool spring, as the pathogen is spread, among other things, by rain and fine water droplets (such as those that appear in fog, for example). An initial infection of young leaves and shoots is particularly common in May and June, whereas from around July onwards, older parts of the plant are only rarely attacked due to their greater resistance - especially since the weather conditions for the fungus in summer are no longer ideal anyway.

In damp and rather cool summers, however, the re-infection of young shoots continues into autumn. Even after the autumn leaf fall, late infections are still possible, which usually only show in the following spring. The fungus overwinters on and in the plant, penetrates deep into the tissue and causes numerous problems - including the death of the infected trees.

In addition to the leaves, other parts of the plant such as shoots and branches are often affected. Here, an infection can be seen, for example, through a flow of rubber or cancerous growths. The latter occur mainly on older trees and show a defensive reaction of the plant. Any fruits are also infected, but soon dry up or rot and are thrown off prematurely.

The fungus overwinters on infested plants, primarily on

From here it spreads in the following spring on new shoots and young leaves. Over time, not only does stunted growth and reduced development of flowers and fruits occur, entire shoots and branches die - until finally the whole plant no longer withstands the disease and dies. In addition, an infection is an ornamental plant, mainly on other Prunus species such as

and probably on hydrangeas and peonies. In terms of indoor plants, palms such as the Kentia palm are particularly endangered.

The so-called bacterial burn occurs especially on older stone fruit trees, which is easily mistaken for shotgun disease due to the similar damage pattern. Here, too, there are gunshot-like leaf holes, but the tree bark is typically characterized by sunken, blackish injuries. In spring rubber flows from these. The pathogen here is not a fungus, however, but a bacterium called Pseudomonas syringae pv. Morsprunorum. As with shotgun disease, it is combated by pruning heavily, but fungicides are ineffective.

There are two possible time periods in the year that shotgun disease is possible. Since the fungus prefers a damp and cool climate, the first wave of disease sets in in spring and the second in autumn - here often only after the leaves have fallen, because then the tiny fungal spores find enough opportunities for inspiration. Once they have penetrated the woods, the fungi destroy the buds that have already been created for the next year. At the beginning of winter, they finally withdraw deep into the interior of the plant.

In view of this life cycle, it turns out that active control of the pathogen is particularly useful in spring and autumn. While you are tackling the fungus at the beginning of budding with pesticides - in the hobby garden, if possible organic -, cut back infected parts of the plant in autumn. In this section we explain how you can best proceed and which means work.

Cut back infected parts of the plant The first step in the fight against shotgun disease is always a strong pruning, in which you cut back all infected leaves and all diseased shoots and branches well into the healthy wood.

In addition, a regular thinning cut is useful as a preventive measure in order to forestall another outbreak. Loose bushes and crowns dry faster after a downpour and thus offer the fungus less attack surface.

If possible, do not plant the cherry laurel (and other endangered woody plants) under taller trees. The rainwater dripping down promotes infection, whereas a sunny and airy location is more suitable for prevention.

Make your own spray - what really helps

A self-made spray that is effective against shotgun disease is based on the fungicidal effect of the field horsetail. In the case of plants that were diseased in the previous year, start spraying undiluted horsetail broth in March - before budding - and continue this every 14 days until the onset of flowering.

Recipe for making the horsetail brew: The broth described is also very effective against other fungal diseases, for example powdery mildew. Used for prevention, dilute the brew in a ratio of 1: 5 with soft water. If you don't want to prepare it yourself, you can buy a ready-made herbal extract from specialist shops.

Nettle manure, on the other hand, is not suitable for combating the fungal disease, but can be used preventively to strengthen plants.

Fungicides allowed in home and hobby gardens - useful or not?

Only a few fungicidal preparations are available for home and hobby gardens. Biologically active agents based on clay or copper, such as those used in organic farming, are available from specialist retailers. Only if these do not work, use an approved fungicide. The preparation Celaflor Mushroom-Free Ectivo, which you can use between March and April both for diseased plants and for prevention, is suitable. However, their use needs to be carefully considered because chemical pesticides involve considerable risks:

Basically, caution is advised, because the list of remedies allowed for private use is getting shorter and shorter. In addition, you must ensure that these fungicides are actually only used in accordance with their approval for the permitted plant species and against the fungal diseases described. The reason for this restriction is to prevent possible resistance of pathogens to improperly used agents. In any case, you will do at least as well with the preventive measures described and spraying with horsetail broth, clay or copper - only without the disadvantages of toxic pesticides. “Avoid too close a stand! Air must be able to circulate between the plants! "

Since shotgun disease is difficult to fight once it has broken out, preventive measures are the best choice. The means and maneuvers described here are useful not only in the fight against these, but also against other fungal diseases in fruit trees.

In addition, it makes sense to strengthen the defense of the woody plants with regular watering or spraying with horsetail tea from the time they sprout. Spraying with network sulfur also has a preventive effect. It is a very finely ground sulfur powder, which can be easily dissolved in water.

Spraying with network sulfur - this is how it works:

Below you will find a list of fruit varieties that are largely resistant (ie particularly resistant) to shotgun disease. These are mainly old varieties, some of which were already cultivated in the 19th century. But be careful: planting insensitive varieties does not mean that the disease cannot break out. In addition to choosing the variety, you should also pay attention to targeted prevention (choice of location, plant spacing, rain protection).

With onions and garlic against shotgun disease

Many gardeners plagued by shotgun disease swear by cultivating garlic and / or onions on the tree grate of particularly infested woody plants. These have antiseptic ingredients that are supposed to reduce the risk of infection. Alternatively, you can simply spray or water your fruit trees with garlic or onion stock as a preventive measure. If a wood is infected with shotgun disease, the fruits are usually also affected. This is shown by dark brown, sunken scabs, which have a considerable negative effect on the taste and also contain fungal toxins. People with a fungus or penicillin allergy should therefore especially refrain from eating or processing infected fruits. However, infected fruit is mostly thrown off before it is ripe.

Also be careful when spraying pesticides: Here you have to observe a waiting period of a few weeks (between 14 days and four weeks depending on the agent used) until the sprayed fruit can be harvested and approved for consumption.

What to do if the cherry laurel is attacked by shotgun disease every year?

Shotgun disease is very persistent and difficult to fight, sometimes it reappears every year - despite all precautionary measures. Particularly in the case of trees that are compatible with pruning, such as the cherry laurel, only radical pruning helps to really eliminate all pathogens completely. This ornamental wood in particular recovers very quickly and sprouts healthy and strong again. Other plants that are repeatedly plagued by shotgun disease - such as the cherry - should, however, be cleared and replaced with a resistant variety.

Does homeopathy help against shotgun disease?

In fact, there are homeopathic elixirs (for example from Neudorff) that were specially developed to strengthen the plant's resistance to fungal diseases. However, these cannot be used directly to combat shotgun disease, as they are ineffective against it. In general, the benefit of homeopathy is highly controversial, since all scientific studies do not confirm an effect that goes beyond that of a placebo effect. Therefore, you should be much more successful with tried and tested home remedies such as self-made nettle manure, since they actually contain active ingredients.

When is the best time to spray?

An injection is only effective for shotgun disease if it is carried out early enough. The first application takes place in the spring when budding begins, followed by two further sprayings at an interval of about ten to 14 days. On the day of the spraying, the weather should be frost-free and dry and there should be no wind - only then will the active ingredients get to where they should be.

It is also useful for prevention not to cultivate fruit trees and cherry laurel near a sprinkler or the like. Watering - for example in very dry weather - should always be done directly on the tree grate and never over the leaves.