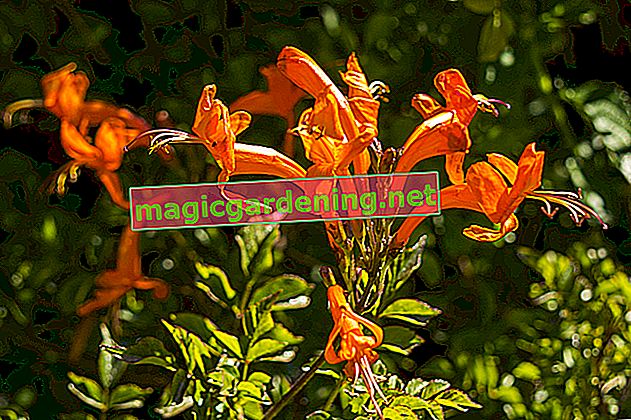 The aim of thinning out the honeysuckle is to allow more light and air to reach the central shoot or the central shoots. Among other things, this reduces the risk of diseases such as powdery mildew. Conventional, sharp and clean secateurs are suitable for cutting.

In general, the honeysuckle is easy to cut. This is how you proceed with the clearing cut in summer (alternatively in spring):

Cut back: cut older ones radically and younger ones gently

In the spring between January and March or in the late autumn before the first frost period is the perfect time for a stronger pruning has come. This type of pruning is particularly necessary if the honeysuckle is bald. This happens, for example, in old age, but also if the location is too shady.

After such a cut, the honeysuckle sprouts again and branches better. The following aspects are noteworthy:

Although various experts claim that the honeysuckle can withstand a cut in old wood. Sometimes that's not the case. With bad luck, a radical cut is followed by sparse shoots or the plant dies. The green young shoots, on the other hand, tolerate cutting much better.

After the cut, pull cuttings

If you cut back the honeysuckle in spring or clear it in summer, you can use some shoots for propagation. It should be slightly woody shoots. The honeysuckle can be propagated without any problems (cuttings). The lower leaves are removed and the cutting is placed in a pot of potting soil.

Make sure you make the cut cleanly. Otherwise there is an increased risk of fungal diseases settling.