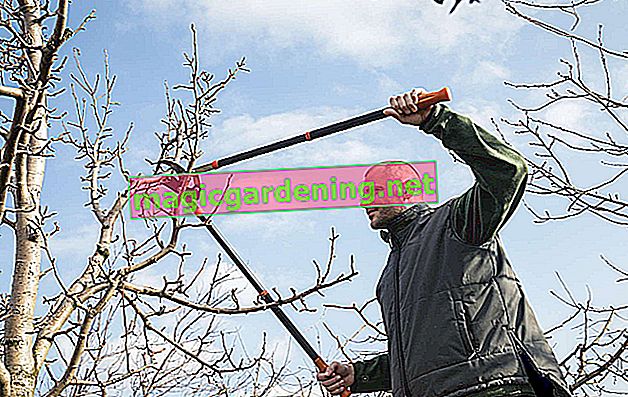 The plum tree has the most abundant fruit wood on two to four year old shoots . Older wood rapidly loses vitality and fertility. Regular pruning measures effectively prevent premature aging. A plum tree gets to know the pruning shears for the first time in the year of planting in order to initiate the cultivation of a high-yielding crown. The following table summarizes all the important types of cut with tips for choosing the best date:

Regardless of whether you plant a plum tree in autumn or spring: the date for pruning is always in early spring. Please select a day with temperatures above freezing and dry weather with overcast skies. How to cut properly:

In order for cut shoots to grow in the desired direction, it is important to have a competent pruning. Always cut 3 to 5 millimeters above an outward and upward facing eye. The cut causes the juice to jam, which causes adequate budding. The stronger the pruning, the stronger the subsequent growth. For this reason, you cut an already vigorous main shoot more cautiously than a weak branch.

Pruning plum trees in rainy weather is taboo. The combination of cuts and damp wood creates fatal pathogens and wound parasites. The focus is on fungal infections and fruit tree cancer, which multiply explosively on damp wood tissue.

In the second and third year, the pruning of a plum is dedicated to the further crown structure. The figure below illustrates the correct incision. How to complete an impeccable parenting cut:

In addition, remove water shoots that are sprouting from the trunk or the game underlay during the summer. Ideally, these shoots should be cut off or torn off when they are not woody because they compete with the plum crown for light and nutrients. Hold the leading branches in the juice balance

A symmetrical crown structure depends largely on the fact that all leading branches are in juice balance . Only one dominant central shoot towers about two scissor lengths over four leading shoots. Starting from different starting points on the trunk, the tip buds of the leading branches should be at the same height. Without the uniform height level, the growth law of top funding takes effect. The guide branch with a higher positioned bud is preferably supplied with nutrients and grows disproportionately. In the end, the treetop loses a lot of stability and, in the worst case, is listed.

After the crown has been built up, the pruning on the plum tree leads to a maintenance pruning at intervals of one to two years. The focus is on removed fruit wood, which is largely exhausted after four years. A typical symptom of this stage is the sagging, heavily branched shoots. This is how the conservation cut succeeds:

If you have thinned the crown thoroughly, deal with the fruit wood. Deeply hanging, worn branches divert them to a side shoot that is closer to the trunk or main branch. Choose biennial side shoots with flower buds. At the fork between old and young fruit wood, choose an intersection a few millimeters in the old wood. Since a plum creates its buds in summer, the flowers are easy to see in late autumn. Plum trees tend to sprout vertical shoots on the tops of their leading branches. With upright growth, no shoot can turn into valuable fruit wood. If the rider is in a favorable position, tie the shoots down at an angle between 45 ° and 90 ° - 60 ° is optimal. The growth calms down, so that after a short time the first spherical flower buds appear. If a so-called water bullet is in an unfavorable place, you should tear it off or cut it off as quickly as possible.

By nature, stone fruit is more sensitive to radical cutting measures than pome fruit. If you have prescribed a rejuvenation cure for an old, neglected plum tree, we recommend the following moderate pruning:

By cutting thick branches on cones, you support wound healing. On cut surfaces with a diameter of more than 3 centimeters, coat the wound edges thinly with tree wax. This protects valuable cambium wood from frost damage. Over the next two years, the cones dry up while several young shoots sprout from them. Remove the remains of the cones in the second or third summer. Select one or two promising, oblique-horizontal specimens from the young shoots and remove the rest. Popular varieties for the home garden, such as “Hauszwetschge” and “Hanita”, thrive as self-fertile plum trees. Basically it is always an advantage for an optimal yield if you socialize two different varieties. Any other plum or plum can be used as pollinator, including dwarf blood plum or columnar plum. It is important to note that the trees are within a radius of 50 to 100 meters.

I want to plant a plum tree in my front yard. Can I limit growth to a height of 3.50 meters by cutting?

For this purpose, we recommend a young plant as a bush with a stem height of 40 to 60 centimeters. This form of training is much slower than a half or high trunk. With the help of annual pruning measures in autumn, you can easily limit the height of growth to a height of 3.50 meters.

My plum tree is 6 years old and has never bloomed. What to do?

Plums and other fruit trees do not have flowers on branches that rise steeply. You can promote the formation of fruit wood with flower buds by tying down steep shoots in a horizontal position. At an ideal angle of 60 ° to the trunk or main branch, the growth in the shoot calms down, so that the first flowers develop and fruits form. In addition, in autumn after the leaves have fallen, cut excessively long, drooping branches back to a side shoot pointing diagonally outwards.

We are moving and want to take our 3 year old plum tree with us. What should you watch out for when transplanting?

At 3 years of age, a plum tree can usually cope with a change of location. The best time is in autumn after the leaves have fallen. Since a lot of root volume is inevitably lost, cut back all branches by a third or half before or afterwards. In this way you restore the balance of parts of the plant below and above the ground.

Without a competent crown structure, home gardeners struggle with a barren plum tree. Those who completely ignore pruning will only enjoy a rich harvest for a few years. If scissors and saws are used in rainy weather or frost, diseases and dead wood spread in the treetop. The following table summarizes the 3 most common cutting errors with tips for preventive measures:

Column plums are ideal for the balcony and small garden. It is a selection of conspicuously narrow growing varieties that are grafted on a poorly growing base. As column fruit, plums benefit from the occasional shape and maintenance cut in late autumn. Cut excessively long side branches back to 10 cm. Remove steep drives completely.