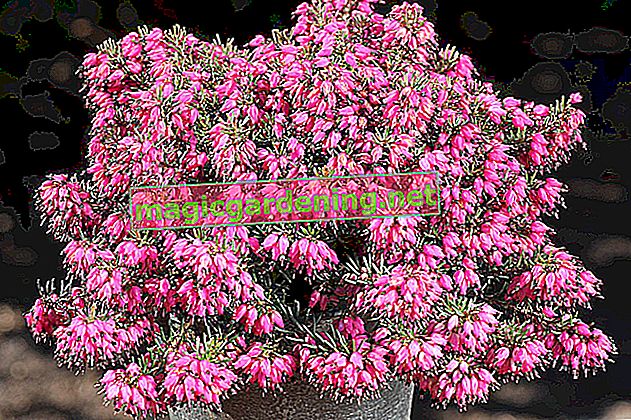 The snow heather, also known as spring heather or winter heather, belongs to the heather family or Ericaceae. Its botanical name is Erica carnea. The additional species carnea indicates the color of the flowers. The natural habitat is in the mountainous regions of western, central and southern Europe. Snow heather grows in the Alps up to altitudes of 2,700 meters. They also occur in the flatter Alpine foothills and in Morocco.

While other types of the heather family grow on acidic soils, the snow heather prefers areas with limestone soils. Your area is located where dolomite rock shapes the subsoil. The woody plants grow in dry forests with Scots pine, black pine and larch. In the area of ​​the tree line, the snow heather dominates the plant community of the dwarf shrub heather.

As a dwarf shrub, the snow heather develops a low and richly branched bush, the thin shoot axes of which lie down or rise arching. Your shoots lignify over time. It forms a fine root system that spreads flat near the upper layer of the earth. Erica carnea grows up to 30 centimeters high. The snow heather is easy to confuse with other heather plants. There are subtle differences between the types that make identification easier:

Snow heather develop sedentary leaves that are lively arranged on the stem axis. The narrow lanceolate leaf blade goes directly into the stem axis. It is dark green in color and shines on the top. A raised central rib in white color is clearly visible on the underside. The leaves are evergreen and appear needle-shaped due to their reduced shape. These thick leaves are an adaptation to the natural locations where important nutrient salts are lacking in the soil.

Erica carnea bears nodding flowers that crowd tightly together in racemose inflorescences. They sit on one side in the leaf axils and are hermaphroditic. Three dry-skinned and slightly reddish colored sepals surround a bell-shaped crown with fused petals. The flower shines in white, pink and red nuances. The dark stamens, which, unlike related heather plants, are not hidden in the crown are striking. Together with the stylus, they protrude from the crown bell.

Snow heaths are early bloomers with a flowering period that extends from January to April. Some varieties bloom from December or into May. This makes the plant a valuable plant for bee pastures, because bees and butterflies are responsible for pollination. The dwarf shrubs form their buds the previous year before winter sets in.

After the flowering period, a capsule fruit develops from each individual flower. It is hidden deep in the bell and opens when it is dry. This special fruit shape ensures that the numerous and very small seeds are spread with the wind. These so-called grain flyers are light and can therefore cover long distances.

Snow heather are popular ornamental shrubs that decorate not only parks but also gardens. The plants have been grown mainly in England since the early 19th century. Since then, numerous varieties have emerged that differ in their striking flower and leaf colors. Their low growth makes them perfect ground covers that can also be used as grave plants. Their early flowering time makes the dwarf shrubs attractive plants that herald in spring with their splendor of flowers. In large groups, the snow heather unfolds its full effect.

Erica carnea decorates rock gardens and pot arrangements. It can be set in mixed beds or planted as a border. The dwarf shrubs harmonize with ornamental grasses, decorative leaf plants, bulb flowers or fine perennials. They look particularly decorative between large stones or gnarled roots.

These are suitable plant partners:

Snow heather are popular forage plants for special species of moths. The caterpillars of the heather moth and heather owl, which is classified as endangered, feed on the leaves of the plant. This ecological aspect makes the dwarf shrubs popular plants in natural gardens. The feed does not damage the plants.

Erica carnea does not contain any toxic substances. It is an essential part of herbal medicine and is used in the form of teas and extracts. You can safely plant the dwarf shrub in your garden, even if you have children or pets.

Snow heaths prefer a sunny location. They also thrive in the light shade, although the flowers in these places are less lush.

A well-drained soil that meets fresh conditions is ideal for cultivation. Erica carnea likes humus substrate, which may be calcareous. It tolerates soils with pH values ​​between 4.5 and 7. The dwarf shrub forms communities with certain root fungi. This symbiosis is vital so that the plant is supplied with all the important nutrients. Therefore, plant newly purchased dwarf shrubs together with the potting soil so as not to destroy the fungus.

You can use these substrate mixtures:

Erica canea can be propagated using various methods, which have their advantages and disadvantages.

Large stands of plants are increased by dividing the root ball. Before digging up the plant, it should be cut back. The roots are cut into several pieces with a sharp knife so that each part of the plant has enough foliage and buds. When doing this, make sure that not too much of the old substrate is lost. It may be that the root fungus has been damaged and the sub-plants no longer grow vigorously or die.

In spring you can bend a long shoot to the ground and scratch it crosswise at the top. Lightly cover the part lying on the ground with earth and fix the shoot with a stone. The tip of the branch should protrude from the substrate. Water the substrate regularly and allow the soil to dry out between watering units.

In autumn you can easily pull on the shoot. If it is difficult to detach from the substrate, it has developed enough roots and can be separated from the mother plant. This method of propagation has the advantage that the roots of the mother plant are not damaged.

During the growth phase, you can cut shoots from a healthy mother plant. The cuttings should not be completely lignified so that they can form new roots. Make sure the shoots are between 25 and 35 millimeters long. The lower part is defoliated so that the leaves do not rot. Put the shoot up to the leafy part in a planter filled with potting soil. The soil should be low in nutrients and constantly moist.

When the pot is high enough, you can cover it with clear foil. You should not touch the shoot tips, otherwise they will bend quickly. This measure promotes constant humidity and the substrate dries out less quickly. It takes about 45 days for the cuttings to develop roots.

Snow heather in a pot

Erica carnea is suitable for planting in pots. Here the dwarf shrub cuts a fine figure on balconies and terraces. The vessel should have drainage holes so that no water accumulates in the substrate. Wintering the potted plants is difficult. Often the lower leaves turn brown after winter. After a while, the dwarf shrub looks unsightly. Suitable protective measures are necessary so that potted plants survive the winter.

Winter heaths have a moderate need for water. They enjoy occasional irrigation with rainwater. Stale tap water is also suitable. The substrate should be moderately moist and allowed to dry off between casting units. The dwarf shrubs need water even during the cold season. Water the plants on frost-free days and make sure that the water drains off completely, especially with container plants. Excess water in the coaster should be poured away.

Only water the plants at the base in winter. The water should not run over the leaves, otherwise there is a risk of being burned by the sun.

Erica carnea does not have to be fertilized, as it gets all the essential substances through its symbiosis with the root fungus. On poor soils, you can support growth with a small amount of fertilizer. If the dwarf shrubs show stunted growth or if they have just been cut back, they enjoy a weakly concentrated supply of nutrients with a special fertilizer. You can use a liquid rhododendron fertilizer.

As soon as the inflorescences have wilted, they should be cut back close to the ground. This measure stimulates plant growth and ensures that the dwarf shrubs develop densely bushy branches. Numerous buds are formed on the fresh shoots in autumn, so that the plants will also bloom profusely in the next season. Use garden shears with sharp blades that have been thoroughly cleaned beforehand.

If you don't prune the plant back every spring, there is a risk of baldness in the lower area. The snow heather grows up in a targeted manner and sheds the lower branches. The longer the shoots become, the more they lean towards the ground. It seems as if the growth is falling apart.

Winter heather is extremely frost-resistant and has no problems with temperatures in the double-digit minus range. The evergreen shrubs need water during the cold season so that their leaves do not dry out. Water the plants on frost-free days.

If the substrate freezes in the bucket, the dwarf shrubs cannot maintain their water balance. The root fungus dies and can no longer supply the plant with nutrients. Waterlogging is also often a problem in winter. If the roots are in cold water, the plants react sensitively. Root rot can occur.

How to protect the bucket:

Hallimasch root rot is an insidious disease that is only noticed late. The spores usually sit in the substrate for a long time without causing any damage. Only waterlogging, cold frosts and drought stress trigger a fungal attack.

The spores of the fungus Armillaria mellea settle on rotten roots and accelerate root rot. The plant can no longer be supplied with sufficient nutrients and water, so that its growth stagnates first. If the infestation is not noticed, the plant dies. There are no known control measures. Affected plants should be dug up and discarded.

Black heather is often attacked by the black weevil. The nocturnal beetles are ten millimeters long and lay their eggs at the base of the trunk. The hatched larvae dig into the substrate and feed on the roots. The beetles feed on the leaf mass and leave behind clearly recognizable traces of eating. You should act quickly so that the plant does not die.

Special pest traps have proven to be effective against the beetles. You should check the plant regularly at dusk. The beetles drop to the ground in case of danger and pretend to be dead. A brew of tansy, neem or garlic has a preventive effect against pest infestation. Planters can be protected with glue rings.

Give your plant nematodes of the Steinernema kraussei species in October and February. They kill the larvae in the substrate. The nematodes need a minimum temperature of 13 degrees Celsius for their metabolism. If your plant is attacked during the mild winter months, you should plant it in fresh substrate as a precaution.

Create a colorful planting arrangement with species that are equally hardy and sun-hungry. In addition to snow heather, horned violets fit perfectly into the balcony box. The silver herb decorates the design with its bizarre growth.